Looking for a be-bop bass without hassle? Matt Isaacson looks at a box of bass sounds that may help you with the bottom end of your music without tying up your favourite synth or sampler.

The dedicated drum machine may soon find itself accompanied by a dedicated "bass machine" - if so 360 Systems are paving the way with the Pro MIDI Bass.

CONCEIVED TO DO for bass sounds what the dedicated drum machine did for drum sounds, 360 Systems bring us the Professional MIDI Bass. It's a neat concept, but can such a device offer enough to make it a worthwhile proposition to the technology-hungry musician? The Pro MIDI Bass is also the successor to 360's original MIDI Bass, and attempts to solve some of the problems it encountered and to provide a more widely useful and professional instrument.

THE PRO MIDI Bass can be summed up as a "Box o' Bass". It gives you real bass sounds, in the form of samples of a full range of acoustic and electric basses - none of the over-used DX7 or mushy analogue synth patches that bombard us from the radio, although a nicely understated Minimoog-type sound has been included, suggesting that the Minimoog has become a traditional bass instrument alongside the more usual stringed ones. Although the sounds are all samples, you don't have to wait for them to load from disk before you can use them. They live in ROM chips inside the box, in finest drum machine style, and the Pro MIDI Bass is ready to cut a groove by the time your finger's left the power switch. Those not impressed by this point may be swayed by considering that the waiting time applies not only to initial power-up but also to sound changes - all available sounds are on-line and available for instantaneous sound changes mid-program.

The package is simple, small, clean and familiar - a 1U-high rack-mount box. You won't hurt yourself lifting it or wear yourself out deciding where it should go. A power switch, volume knob, 2X16 character LCD and a handful of programming switches and LEDs are on the front panel. The rear panel is simpler still: MIDI In, Out and Thru jacks, and audio out (plus the obligatory LCD viewing angle adjustment, which probably should have been on the front). On power-up the display informs you of the revision level of the installed software as well as the number of bass sounds you have. This is done because the number is not strictly fixed - ample room has been left for expansion of the internal sounds. The stock unit comes with eight sounds, which use up less than half of the available ROM sockets inside.

The Pro MIDI Bass is a monophonic playback system capable of generating one sound at a time, but that isn't to say that it only lets you get at one sound at a time. In fact, the basic structure of a preset will hold four sounds. Each preset (there are 30, by the way, in the latest software) allows you to define lower and upper zones which map out areas of a MIDI keyboard over which the instrument will respond. These zones can be anything from one note to over three octaves wide and may adjoin one another or be in completely separate parts of the keyboard. As a result, it's easy to put the sounds where you want them, even if the keyboard you're playing from isn't geared for that sort of splitting. A transpose value can be set separately for each zone, allowing, among other possibilities, the same set of pitches to appear in two different parts of the keyboard at once.

Within each zone, two sounds are selected from the available set - one is a given threshold, and the other is the "normal" sound which plays at all lower velocities. An obvious use for this normal/accent feature is to use a plucked or picked sound normally, with a slap or popped sound on the accents.

A HANDFUL OF other controls governing the presets are available and are separately adjustable for each of the four sounds in a preset. Volume sets the relative loudness of each sound. Decay and release control the demise of the sound after it is triggered - decay while its key is held down, and release after the key is released - over a range from instantaneous to languorous. A low-pass filter lets you cut some of the high end from a sound to keep it from taking over. The filter has no envelope and is not affected by note velocity, but the cutoff does track note number. Velocity control for the "normal" sound is an on/off switch - velocity either does or does not affect the loudness of a note. (An actual adjustment of velocity sensitivity would have been helpful in cases where there seemed to be too much velocity response.) Velocity control for the accent sound takes the form of a threshold velocity at which playback switches from the normal to accented sound.

In spite of all these features, you can still only play one note at a time. For those nice octave and parallel-fifth effects, there is a second-voice cascade feature. When enabled, the Pro MIDI Bass will respond only to alternating incoming MIDI notes - intervening notes are echoed out to the MIDI out jack, where, budget willing, a second Pro MIDI Bass is waiting to pick up the overflow (you were wondering why a rack-mount box has a MIDI output, weren't you?). This can also produce some interesting effects if the overflow module is something other than a Pro MIDI Bass. (Frankly though, before I'd consider buying two of these, I might start looking around for a cheap sampler instead).

"Samples: The Pro MIDI Bass gives you real bass sounds, in the form of samples of a full range of acoustic and electric basses."

The instrument also provides some options with respect to how it will decide which note to play when presented with more than one playable note at a time. The basic mode is last-note priority, in which the latest arrival always gets preference. This mode is ideal for players who occasionally hit two keys by mistake, as it tends to make such errors less noticeable. Low-note priority gives preference to the lowest note when more than one note is played. Using this mode, the Pro MIDI Bass can be directly layered with another keyboard sound where some combination of bassline, chords and melody are being played. It'll pick out and play the lowest note only, allowing for more flexibility than with a hard split point although this also restricts your choice of chord inversions. High-note priority is similar, but chases the highest note being played at any time. Some players may be disappointed to learn that the voice cascade and note-priority settings are global rather than being part of each preset. 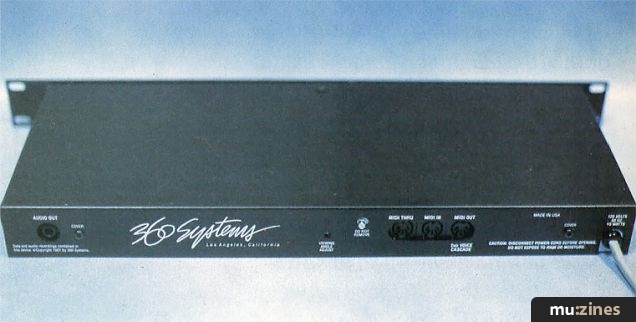 Other non-preset controls include enable/disable of MIDI patch change, main volume and pitch-bend response (+/-3 semitones), MIDI channel setting, master fine tuning, and keyboard transpose interval. The last specifies a transpose amount which operates on both zones of whatever preset is called up. It works in conjunction with a transpose button on the front panel which allows you to instantly switch the transpose on or off (for a quick change of octave in any preset, for example). There's also a memory-protect control and a test note function which allows you to play sounds from the front panel - a helpful tool when a bad MIDI connection is suspected.

THE STOCK SELECTION of sounds includes: Fingered Steinberger, Fingered and Picked Flatwound P-Bass, Rickenbacker, Funk Thumb, Funk Pop, Standup Pizzicato and Minimoog Square Wave. All of them are multisampled to allow them to cover a range of three octaves or more, and all but Funk Pop are looped to allow long decay times. The names describe the sounds pretty well, and the basic character of each sound is also pretty good.

On a more microscopic level, however, the quality of the sounds is a little bit spotty. One problem is a consequence of the limited recording time available for each sound: namely that the loops are quite short, typically only one cycle of the sound. In some cases the sound almost appears to detune slightly upon entering the loop, although in just as many other cases this effect is not very noticeable. Where offensive, this can be avoided only by releasing the note before it enters the loop. Another problem which appears to a widely varying degree is that of abrupt changes in tone of a sound at the multisample splice points. In fairness, this problem afflicts all samplers to some degree when used for multisample playback, because it's pretty hard to record two different things and end up with them sounding the same. For that matter, playing the same note on two different strings of a bass guitar will give you two different sounds, which is precisely the problem - or maybe it shouldn't be viewed as a problem...

"Zoning: It's easy to put the sounds where you want them, even if the keyboard you're playing from isn't geared for splitting."

One Standup Bass sample was noticeably noisy, and fret buzz was audible in one of the Funk Thumb samples - again, is this actually a shortcoming? Also, in general, small clicking sounds sometimes accompanied voice stealing.

These are things that might complicate a critical producer, but aren't likely to get in the way during performance, unless you are heavily given to bass solos.

Meeting the Pro MIDI Bass on its own terms will enable you to get good results with it. 360 Systems are reportedly at work on a sound library which will include double-length sounds aimed at minimising looping problems by providing more playback time before playback enters the loop. Based on the example sound provided for review (Picked Roundwound J-Bass), they're making big strides in all areas of sound quality.

BY NOW IT may be apparent that in many respects the Pro MIDI Bass has playback capabilities very similar to those of a sampler loaded with bass sounds. Why not just buy a sampler instead, and be able to sample your own sounds? The Pro MIDI Bass is not for everybody. If it's a sampler you really want, don't buy the Pro MIDI Bass. If absolute sound quality and realism at any cost are what you're after, hire a bass player. But, if you want flexible, reasonable-quality, no-fuss sampled bass playback at a reasonable cost - particularly, if you already have a sampler and don't wish to constantly devote a substantial portion of its relatively expensive voice and memory resources to a use which doesn't really demand them - the Pro MIDI Bass may be just the job.

On The Way Up 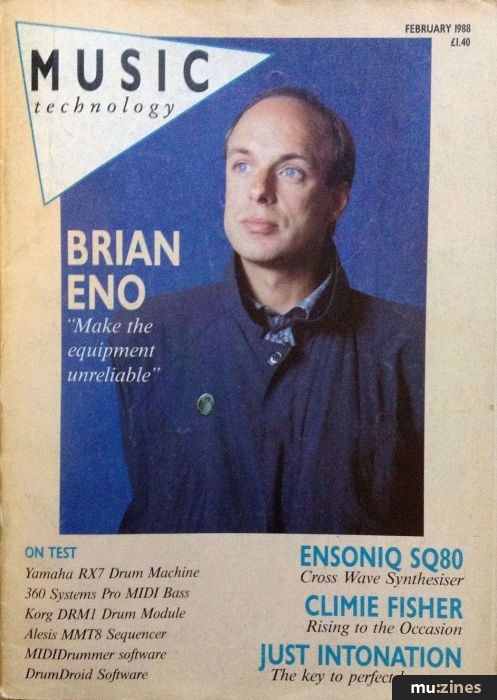 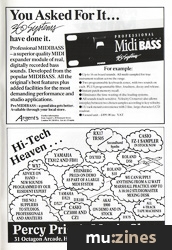