While the multieffects processor competition continues, Akai have opted to produce a dedicated reverb whose strength is in its natural sound character but is it what people want?

WITH THE LIKES of Alesis, ART and Digitech vying for the title of "King MultiFX", it should come as no surprise to find Akai entering the field of battle. After all, while their EX90R has existed since mid-1987, it can hardly be regarded as a serious piece of pro studio gear. But Akai have never been inclined to rest on their laurels, and as their range of gear has been rather light on the reverb front, the introduction of the new AR900 16-bit digital reverb does not come as much of a surprise.

What is more interesting is Akai's active decision not to make it a multi-effects unit, and to price it at £799, so bringing it into the higher price range, somewhere in between Yamaha's new SPXs - the SPX900 and SPX1000.

ENCASED IN A 1u-high Akai-grey rackmount, the AR900 has a fairly busy front panel: a two-row x 16-character backlit screen, surrounded on either side by four bar graphs of six segments each for left and right input/output, and a two-digit counter to show which of the 99 possible programs is currently selected. The rest of the panel is made up of three rotaries for input, output and parameter value, and eight push-buttons for accessing all programming facilities, each of which has a small red LED to the top left-hand corner.

The rear panel has inputs and outputs for channels 1 and 2 as well as an effects loop (of which more later). MIDI In, Thru and Out sockets and footswitch jacks for Bypass and Program change Down/Up (stereo jack) complete the socket arrangement. The only other rear-panel feature is a battery back-up switch. 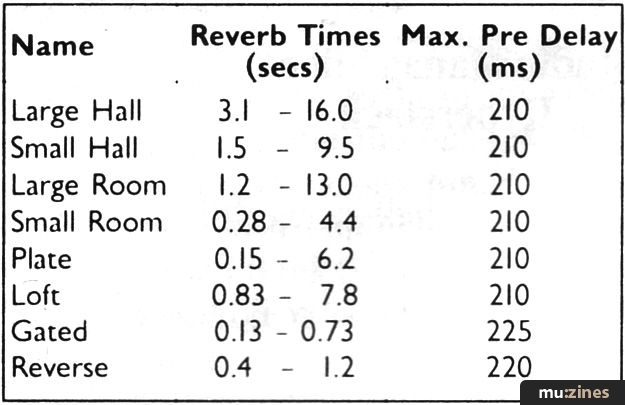 THERE ARE EIGHT basic reverbs, as follows:

As well as the above parameters, each reverb also has a high-frequency damping switch, which acts as a low-pass filter with a shallow gradient (and so synthesises soft, absorbent surfaces which soak up the top end), and a low-frequency cut switch which pretty well eliminates all frequencies below 100Hz. Movement around the various screens is achieved by use of the parameter value rotary and the Support button, which comes into use when a screen requires both movement and parameter value changing. This is indicated by the LED above the Support button flashing.

The above standard settings take up the first eight memory places and are followed by 12 more, which are called "Maker's Programmes" and are non-editable, existing in ROM. There are then 79 user slots which will hold all parameter changes (including Bypass). These can be named, but you then lose the identity of the original preset they are derived from, because the name overwrites the reverb type.

ALTHOUGH OTHER REVERB units often have built-in EQ of some description, the EQ found on the AR900 is particularly interesting as it is comprised of a stereo seven-band graphic EQ with frequencies centred at 100, 300, 600, 1500, 3000, 6000 and 10000Hz, with a boost/cut of +/-12dB. Channels can be set separately or together, by visually altering bar graphs on the screen. The equaliser can be situated either pre- or post- reverb and has an effects send/return loop which can be activated from the parameter button. This breaks the connection between the reverb and the graphic when the latter is set to pre-reverb. Using the graphic output and reverb input sockets on the rear panel, it is possible to divorce the equaliser from the reverb and so use it as an independent process, although it must be said that this is not the principal idea behind this feature, as the graphic is not necessary when tailoring the reverb for individual requirements. Using the loop to send the signal to an external processor opens the door for a variety of interesting effects while keeping the noise level down by removing any awkward frequencies via the graphic.

Another departure from the norm is the inclusion of a stereo spectrum analyser operating at the same frequency bands as the EQ. The idea behind this is to enable you to see which frequencies are dominant in the input signal and tailor the graphic in such a way as to remove any resonant peaks. This game plan is difficult to implement for two reasons; firstly, the analyser has no freeze or peak hold facility, so making it difficult to use visually, and secondly, the levels shown are inordinately low and have to be boosted via the input rotary, so rather defeating the object.

ALL THE INNOVATIVE ideas in the world matter little if the basic sonic quality of a unit is poor, but with a sampling rate of 41kHz it would be fair to expect the AR900 to return a high performance.

Having said that, the worst possible start to a review of a piece of audio equipment is when the first preset sounds, put it kindly, very ordinary. 'Large Hall' has a somewhat dull metallic ring to it and sounds far too "springy", with a clearly audible shimmering in the decay. Further investigation reveals that the graphic has been set with a 12dB cut at 6kHz and the reverb time is a measly 3.1 seconds - the minimum possible at that setting. Boosting it to about five seconds and adding a little more judicious use the graphic led to an altogether more satifactory result. Of course, this shouldn't really be necessary because the standard settings should either be dead flat or as good as they can be. First impressions are important and many of presets here appear to be far too "middly".

The 'Large Room' preset suffered from the same type of problem with an oddly tailored equaliser and, again, the minimum reverb time setting. I realise that the frequency response of naturally-occurring reverb rarely exceeds 7kHz, but when the top end response of a unit is good - as this one is - surely it would be sensible to show it off.

The quality of the AR900 is generally pretty grain-free with the 'Loft' reverb being worthy of a special mention in this respect - rather smooth and cavernous. Similarly, 'Gated' has a crispness which is due in no small part to the fact that the 300Hz band has been cut by 12dB.

Working with the AR9000 it quickly becomes clear that the graphic has far more significance than would appear likely at first sight, it allows the reverb to be adapted to any situation and can generate quite dynamic results. As always, there is a rub. Boosting frequencies, especially in pure reverb mode, causes an unwelcome increase in the noise level, which is otherwise very good - certainly quieter than a Multiverb or Quadraverb, and at least on a par with the SPX900. This would tend to infer that better quality components could have been used in this section. However, the cutting of the lower band frequencies and use in post-reverb mode restricts the noise to a minimum and gives quite acceptable results.

Direct comparison with other units is difficult. Both the Quadraverb and the Multiverb have an immediacy about them, a presence which the AR900 cannot match. The reason for this is the over-bright results obtainable from the Alesis and ART machines which hide the lack of warmth, but certainly accentuate the grainy nature of their sound, which while being highly desirable from a commercial music point of view, hardly passes for true reverb. To my ears, they sound as though they are being permanently passed through an aural exciter. The SPX900 also has a slightly unnatural smoothness, albeit a very desirable one. No, the strength of the AR900 lies in how natural it sounds, which may sound odd when taken in the context of its need for an internal graphic - but if the raw quality were poor, an equaliser wouldn't really hide this shortcoming.

ONE EXCELLENT FEATURE of the AR900 that has, as yet, remained unmentioned is the infra-red remote control unit. Seventeen buttons take a lot of the hassle out of the multi-access front panel knobs and allow the AR900 to be racked away out of reach, if not out of sight.

The MIDI side of the AR900, however, is more disappointing. It only supports program changes and a parameter dump. With today's technology it would be reasonable to expect MIDI control of reverb time at least. This omission is made all the more strange when you consider the comprehensive MIDI facilities of Akai's own S950 and S1000 samplers.

The parameter dump is a welcome facility, especially when a battery change is needed, and at least there is a MIDI Out to allow this. (Ever tried extracting the data from an SPX90 without internally converting the MIDI Thru to an Out?) On the other hand, I wonder just how many AR900 users will ever fill up the 79 user slots. It would also have been nice if Akai had included the System Exclusive information for a single patch dump, which would then allow the necessary bytes to be stored in a computer, along with note data on a sequencer song file.

THE DAYS OF judging a piece of equipment's quality by its performance seem to have disappeared; the criterion now is the price. In this respect, the AR900 will be seen by many as being overpriced for the facilities it offers - or rather those it lacks: no multiple effects or separate channel capabilities.

But perhaps we're being unfair to Akai. The AR900 is a classic reverb unit which certainly puts most of the current batch of processors to shame when viewed from the point of view of purity and natural quality of its reverb. If you're working in a pop-oriented studio, then I doubt whether you will give this unit a second glance, but the more discerning amongst you will certainly do yourselves no harm by having a listen. 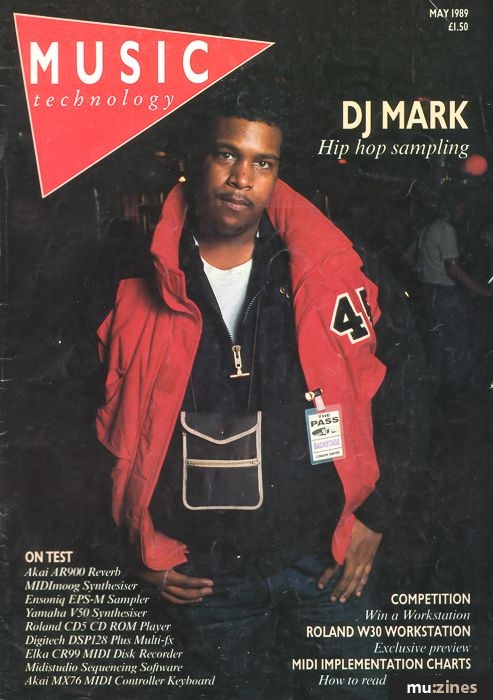 Issues that have been donated or scanned for us this month.