Three mics are involved in this month's review. They come from E-Vs Pro-Line range and have the descriptive prefix PL. This is in contrast to the RE prefix used for most others in their catalogue.

E-V have many models and if I dare say it, one particularly famous one, the RE20 moving coil cardioid. A very popular recording and broadcast studio mic in all parts of the world and very often featured in photographs of artists in such environments. The mics we are looking at include the PL20, the Pro-Line version of the above RE20, the PL5 moving coil omni mic and the PL77B cardioid electret capacitor.

This is the description by E-V of their techniques for controlling cardioids in close up usage where the proximity effect occurs.

Most cardioids have a single rear port or opening behind the diaphragm - single distance or (in E-V parlance) Single D. This is a complex setup producing a directional effect by various phase cancellations. Close up use a few inches away from the mic's front will usually give 10dB of boost at 100 Hz.

With Variable D, E-V have distributed the rear ports such that high frequencies enter the port closest to the diaphragm's rear, whilst mid frequencies enter mid-way along the mic case and low frequencies farthest from the diaphragms rear. Thus the term 'Variable D' for the scheme. In practice there is a dramatic reduction in the bass boost proximity effect. There is a further E-V variation of this with their Continuously Variable D where the rear acoustic path is a slotted tube with a similar proximity effect reduction.

This equivalent to the RE20, as mentioned earlier, is a whopper of a mic! It is indeed a smooth performer and although listed as an 'instrument' microphone, has a very effective built-in 'P Blast' screen and the Variable D rear of diaphragm loading, so it's more than 'at home' in vocal situations. I know that ILR Station Radio Essex use them as presenter's mics (RE20) and they have complete freedom from 'P Blast' popping which I know is a problem elsewhere.

High signal levels proved to be no difficulty for the PL20 and E-V make a particular point about this in their brochure. There is a bass cut switch which is useful in situations where the normal low frequency extension would be best removed - for example, with female vocalists, suitable instrumental miking or if LF feedback happened to be a problem. Handling noise is certainly below average although I imagine stand use is most likely due to the mics physical size!

I was greatly taken with the sound of the PL20. It is not at all easy to put together a set of words - it simply lacks the colourations to which I am sensitive. There is a subtle HF lift over the 6kHz to above 10kHz area and this is preferred to similar lifts lower down in the audio range. Clarity is assisted without apparent colouration, producing an almost 'transparent' sound.

I welcomed the chance to investigate an omnidirectional mic and feel that every mic 'armoury' should be so equipped. The PL5 would seem, if I am not mistaken, to be the Pro-Line version of the 635A in the other listing. With the inherently reduced proneness to 'P Blast' popping, wind and handling noises of an omni, this mic is ideal, where feedback allows, for close vocals or outside use. Possibly in a recording situation where the room used is not damped acoustically, too much room character would intrude compared to what a cardioid would produce. The PL5 handling noise is mainly of high frequency content produced by a hand rubbing against the body. Of course, proximity LF rise is totally absent, although you need to bear in mind the fact that close up use will always produce a different sound to more distant pickup, as the sounds harmonics are emphasised because they are not attenuated by the longer path air propagation.

Overall the sound is absent of colouration with constant bass roll-off. There is a lift at the upper HF end and this will appeal where additional 'clarity' is needed.

This is a dual powered mic in that it functions on an internal battery or by external phantom powering. Certainly the latter eases one's fears when on location - I dislike relying on batteries with any equipment. There is a bass roll-off switch and this gives control when used close as this is a Single D type. E-V make the point that many performers prefer the type of sound produced when close to a conventional cardioid, but much will depend on the particular PA bins and the room as to whether clarity is maintained 'live'. For me, all too often in local clubs and pubs it seems that entertainers substitute sheer level with HF cut to stop feedback and this with conventional cardioids makes for an even thicker, less distinct sound.

But back to the PL77B. There is inherent bass roll-off and the switched bass is an asset. The presence peak seems in character and the handling noise is below average. Similarly the 'P Blast' protection is effective, but one negative aspect is the hiss level. To put it in context I must mention that we are talking here about digital test recordings. (Sony PCM F1). In the series of comparisons made against the other mics in the review and other moving coil microphones, it was very noticeable that there was pervading background when the PL77B was in use. Each mics output levels had been tailored for test purposes, to make the comparison fair. Generally electrets turn out to be hard pushed to match 'proper' capacitor mics in terms of hiss. Compared to moving coils, 'proper' capacitor mics will score in hiss terms unless the mic pre-amp used is particularly good.

All three mics have zippered vinyl carrying bags and stand adaptors. All are low impedance (150ohm) balanced, although the PL20 can have its source impedance altered to either 50 or 250ohms by internal soldered connection. The two higher values are somewhat academic in their differences.

Electro-Voice mics cannot be ignored and the range is extensive. Seek out an E-V stockist or someone who has some to find out what attractions they might hold for you. We hear that there is to be an E-V 'pressure zone' mic. Watch this space! 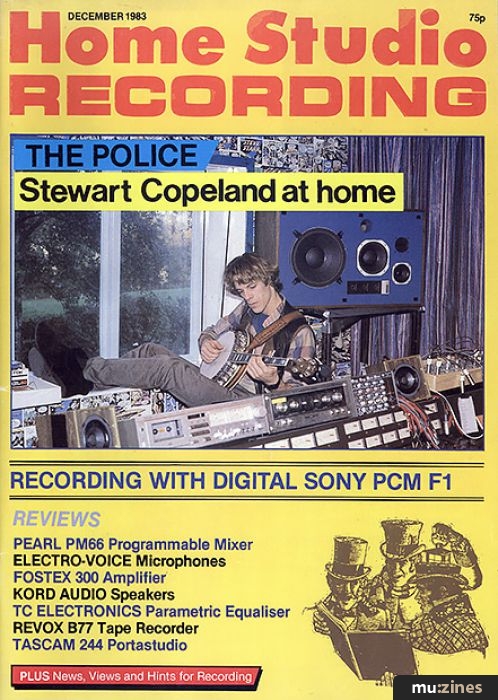