Electronics & Music Maker - Dec 1984 Everything but the Kitchen...

Electronics & Music Maker - Dec 1984 Everything but the Kitchen...

Steve Howell (again) continues our series on interconnection by describing solutions to problems that arise from interfacing synths from different eras and manufacturers.

Or how to get the best from your electronic instruments by syncing them together. Part two looks at playing synthesisers from each other.

What sets the synthesiser apart from every other musical instrument is its ability to be played by another instrument. Imagine the joy of, say, the world's trumpet players if they could suddenly and magically hook up their instrument to a piano so that every note they played would result in the second instrument following, either in exact unison or an octave or a fifth apart. Yet such arrangements are easily obtained in the world of synthesisers. All you need is a couple of leads and... the know-how necessary to connect two instruments from different eras and manufacturers. Which is where this month's Everything but the Kitchen... comes in.

In the mid-sixties, Robert Moog rationalised the whole concept of synthesisers by introducing a technique known as voltage control. This simple idea is based on the principle that by applying a voltage to the control input of any synth module, you can affect its working parameters. So for instance, if you apply a voltage that undulates up and down to the control input of a Voltage Controlled Oscillator (VCO), the pitch of that oscillator will rise and fall as the voltage increases and decreases.


Now, a synthesiser's keyboard represents a further voltage source which, scientifically speaking, is really no more than a switched variable resistor that allows more or less voltage through to the VCOs depending on which 'note' you play. A further requirement for the keyboard is that it should provide a pulse suitable for triggering the synth's Envelope Generators. So, what's now clear is that whenever you play a note on the keyboard, you actually generate two voltages - one to determine the frequency or pitch of the VCOs, and one to 'fire' the EGs. A keyboard, then, is just another control device and can't therefore be dispensed with in some instances: that's why many of the earliest synth designers didn't include one.

Figure 2 shows the layout of two typical synthesisers readily available from most music shops. The keyboard is routed to the VCOs, while the Voltage Controlled Filter (VCF) and the keyboard's trigger output are connected to the gate or trigger input of the EGs. Note also that there are two points on both synths - A1 and A2 and B1 and B2.

What happens if you connect these sets of points together? You've guessed it. One synthesiser can be used to control the other. I hasten to add that electronically, things aren't quite as simple as that, but it's all you need know about it in practice.

Points A and B appear on the back of most analogue synthesisers (though obviously they're not labelled as such), and it's these that allow your synth to talk to the outside world and strike up lasting friendships with other electronic instruments.

On some synths, you'll find separate inputs and outputs for both CV and trigger connections, but one important point to bear in mind is that these are switched jacks, so that whenever you plug something into one of them, you automatically override the synth's internal functions and replace them with those of the external keyboard.

The reason most manufacturers put override functions on their instruments is that presenting a module with two voltages (one from each keyboard, in this case) can cause a lot of technological confusion, which more often than not results in the synths drifting out of tune from each other.

And that's really what it's all about: overriding one function within a synth with something from a second, so that the latter instrument does all the controlling. Nowadays, MIDI and its associated technology have changed the workings of the concept a little, so that instead of a keyboard providing two discrete voltages, it supplies just the one digital code which is then multiplexed into two separate voltages for the purpose we've just analysed.

Having said all that, you're still going to run into a few difficulties...

The reasons for these difficulties aren't as complex as many people seem to assume, and really date back to the early days of synth mass manufacture when there was little communication between designers and each one went his own sweet interfacing way. As a result, certain incompatibilities cropped up.

The two leading manufacturers of the time - Moog and ARP - utilised the principle that every volt increase results in the doubling of a module's parameters. In other words, if the VCOs receive a voltage swept over a range of one volt, the pitch changes by one octave; if the VCA receives a similar voltage, the signal fed into it becomes twice as loud, and so on. Some early Korg and Yamaha synths utilised a volts-per-hertz system and were therefore incompatible with the volt-per-octave models; conversion could only be carried out by Korg's MS02 interface (more of which later).

Some time after, the former system was adopted as the industry standard and became known as the one-volt-per-octave rule. What the makers couldn't agree on was a standard form of trigger pulse, and even today, problems exist in this area (hence the rationale behind this series of articles). There are currently three types of trigger signals in use, none of which will talk to either of the others without a suitable interface.


The Positive V-trigger is the most common form of trigger and can be found on synths from Roland, ARP, SCI and Oberheim. The trigger rests at zero volts when no note is played, rising to a positive voltage as soon as any key is pressed. This form of trigger is also found on almost all drum machines and sequencers, too.

The S-trigger is found exclusively on early Moog equipment, and is also known as a 'switch' trigger. It rests at +12 volts but goes down to zero volts when a key is depressed.

The negative V-trigger is used by Korg and early Yamaha analogue monosynths. Like the positive version, it rests at zero volts, but then falls to a negative voltage once you play a note.

So, what happens when you connect your Roland SH101 to a Moog Prodigy? Sadly, not a lot. In order to get the Roland to trigger the Moog, you'll need to transform the trigger pulse completely: a circuit is shown in Figure 4(a) which'll do just that. It will not, however, allow the Moog to play the Roland, so a circuit for this is given in Figure 4(b).

Converting a positive V-trigger to a negative one is relatively straightforward, and a suitable, circuit is easily constructed using a cheap and cheerful 7411C: the diagram is shown in Figure 5. This little piece of electronic wizardry will enable you to trigger Korg sequencers and arpeggiators from Roland drum machines. Alternatively, you can use a Korg MS10 (or 20) to play a Pro One, no problem.


If all this circuit-building sounds too much like hard work, you could always take the easy (read 'more expensive') way out and purchase Korg's ready-built MS02 interfacing unit, although this may not be that easy as it's now obsolete. It used to retail around the £95 mark, but if you shop around you may be able to pick one up secondhand. As well as converting positive Vs to negative Vs and S-triggers (or vice versa, or any combination you can think of), the Korg also gives you the option of being able to trim control voltages so that both synths can be connected in the true and certain knowledge that they will be perfectly in tune forever.

If money's no object, there's always the Mini Doc and Doctor Click interfacing devices from Garfield Electronics. In fact, Garfield's UK importers, Music Labs, have just started bringing in a new range of low-price interfacing equipment from the American company, so they could be well worth checking out.

Of course, the arrival of MIDI has made playing synthesisers remotely from the keyboards of other synths no more complicated than fitting a couple of MIDI cables. However, the wonderful Oberheim Xpander excepted, few MIDI instruments are equipped with old-fashioned trigger sockets, so if you've got a couple of synths from differing generations (a DX7 and a Pro One, say) you're going to have to resort to an analogue-to-MIDI converter such as Sycologic's AMI or the London Rock Shop's DigiAtom 4800.

Series - "Everything But The Kitchen..." 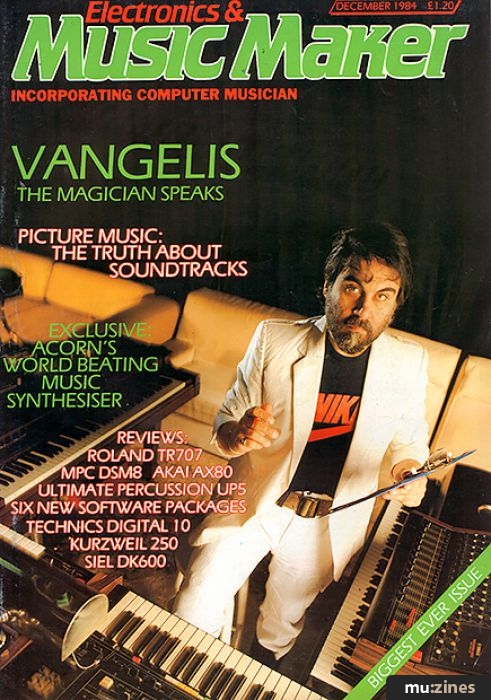 Everything But The Kitchen...