Tales of harmonic Strats as Nils plays with Bruce Springsteen, Neil Young, and even his own band

"Being talented is only half of it," says the talented Mr Nils Lofgren, no sooner off the Bruce Springsteen tour than out on the boards with his own band. Tony Bacon finds out about the Strats, the Martins, and the other half.

If you were Nils Lofgren, you'd have been on tour for most of last year with Bruce Springsteen. You'd have been invited to do yet another tour with Neil Young later this year. And your own band's new live double album, recorded on the December '85 British tour, would be out right now.

So how would you feel about your guitar playing, given all this rich experience? Would you believe, uncertain?

"I think my reputation as a guitar player is very flattering, but I think it's been overdone," says Nils, sitting in the control room at Jacob's studio where he's mixing his live album.

"I'm a rock 'n' roll guitar player, that's for sure, and I'm very comfortable with that. But I can't play jazz or anything else, there's a lot of limitations I have. I just feel like a beginner: there's so much I'd like to learn, to read music, play jazz, to be able to go and sit with someone like, I don't know, like Miles Davis? I would instinctively feel out of it if he asked me to come up and jam, there'd be areas I'd be uncomfortable with."

But Nils! objects your Making Music correspondent. You've been playing guitar since you were 15. You played in two wonderful American guitar-based groups in the Sixties and Seventies, Grin and Crazy Horse. You've turned up on various Neil Young tours and LPs. You've put out your own solo records since 1975. You are, well, pretty bloody good, we reckon. So possibly Miles Davis would be a bit uncomfortable if you asked him to come up and play on some of your stuff?

"Oh no, I don't think so! But jazz at a certain level becomes complex enough that you need to do a bit of homework. After a few months of playing rock 'n' roll guitar I was actually able to improvise and start playing the blues, cos I had that ability... but there's certain things in jazz, for instance different time signatures that change from measure to measure, that really come from practice, from doing it."

And surely there's a danger that you might lose your intuitive rock 'n' roll feel by getting involved in lots of complicated jazz licks that might end up not even being relevant to your style?

"It might be a danger to some people," considers Nils. "But I don't see it as ever being a danger to me. Rock 'n' roll is too much in my blood, I couldn't lose that, no matter how much I learnt about something else."

One of the most important things that Nils has learned in the time that he's been playing guitar has been to step back and prevent himself from playing too much. On stage, there's a natural energy flying about: very often the tendency is to overplay because it's just so much fun. Know the feeling? Nils has learnt that this is not necessarily good for the music as a whole. "From experience, I don't have to think, 'OK, lay back, wait, let it build here,' because now it's become second nature. It comes from confidence, realising that you don't actually have to play a lot, and in fact that sometimes less is more. That sort of 'patience' comes from experience."

Lofgren defines his style as a combination of efforts. On one hand (probably the right), he's trying to be precise; on the other, he's a great believer in taking chances. "Sometimes you can take chances and it'll come out horribly, but some of the most inspired moments are when you take chances and it goes on to another level: you wind up playing a bit over your head. And it changes from night to night - even in an environment like the E Street Band where it's all about songs, it's not like in my own group where I'll take solos starting from nothing and building. It's a natural, intuitive thing - you have to take chances like that to keep it exciting, otherwise it would be like a Las Vegas review."

Certainly you get the feeling from talking to Nils that he's most at home on a stage, his trusty Lawrence-pickup-equipped Strat belting through his Fender Super Reverb and Music Man amp setup. Indeed he admits over the years to have done most of his practising and most of his learning live on stage in front of an audience. Would he actually recommend that? No, he's not too proud of that. But then he says he's not actually obsessed with music - he merely loves it.

So what would he recommend to someone just starting to learn to play guitar and get into bands? What advice would he give to someone in the position that he found himself in 20 years ago - with a guitar, an amp, and a passion for rock 'n' roll?

"It's such a political business," Nils explains. "Being talented is only half of it. No matter how much you just want to play music, if you have a means of making a living, too, when you start out, you should keep that until your music gets so good that someone offers you a way of making a genuine living. Avoid that pitfall of saying hey, I love music, I've got to do it all the time, and ending up playing Top 40 cos you've got to make money."

Lofgren's most recent live escapade in this country was in February when he did a one-off acoustic-only concert at London's Palladium. He started playing acoustic guitar way back in the early 1970s when Neil Young got him to play on the classic "After The Goldrush" album. "At that point," says Nils, "I hadn't really been playing guitar long, period. As a present for making the album Neil gave me an old Martin D18 which I still have, and I've written many of my songs on it. Neil wrote most of the Buffalo Springfield songs and most of the earlier Crazy Horse stuff on it. So it was a beautiful present. I used it a bit more in Grin - I've used it on and off since then. I'm comfortable with it."

There's also a good chance that Nils will be working again soon with his old mate. "Neil Young's finishing up a rock 'n' roll album now, and there's a possibility he may come and tour in Europe this summer. He asked me if I'd be interested in joining the band, which of course I'd love to do, especially as he had Neil Jordan drumming for him, he's terrific. I just know it'd be an awesome band. So if Bruce isn't doing anything I'd love nothing better than to do that with Neil. In fact I can't lose: at least for part the summer I'll either he here touring with the best rock 'n' roll band Neil has ever had, or I'll be working with Bruce, probably in the studio."

Not a bad choice for a guitarist to have to make.

A truly distinctive feature of Nils Lofgren's playing is his application of harmonics. He doesn't use the usual method of touching a left hand finger against a string at a harmonic point and plucking the string while simultaneously removing the finger, but a method sometimes call "blind" harmonics.

"It doesn't matter where my thumb is picking the string, as long as the first finger is over the string exactly half way between the fretted note and the bridge saddle. When you're playing lower on the neck, you can use the frets as a guide to where you need to put the first finger - suppose you're fretting a G on the low E-string, you'd need to lay the first finger on the G an octave up from that. But even when you're playing further up the neck so that the harmonic position is off the end of the fingerboard and into the pickups, you can do it by looking, and by feeling - you'll be able to hear if you're a little off. Course, sometimes accidentally by being a little off like that you'll get a couple of overtones and other sounds that end up being nice."

Chord of the Month 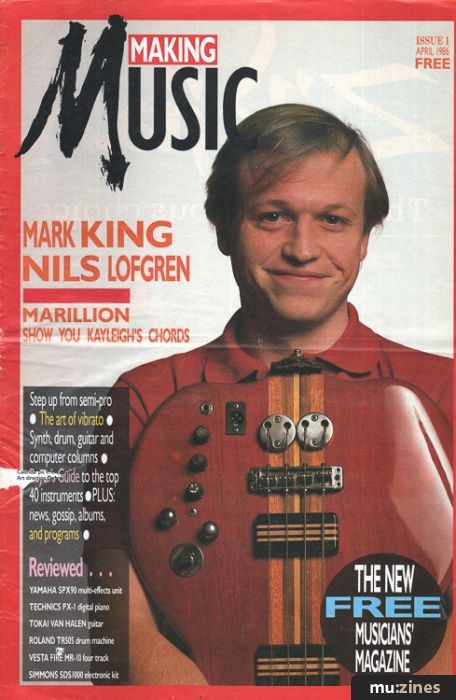 > Chord of the Month