David Mellor reviews this sample library for the educated user.

The McGill University Master Sample library. The title sounds rather dull and academic, but perhaps that's the idea. One route to creating usable programs for your chosen sampling engine is to find samples which are 'the instrument, the whole instrument and nothing but the instrument', plain and simple. The other way is to find samples which are quirky, but not necessarily representative of an instrument played as it normally would be. Both these methods have their uses, but it is certainly an advantage to have a body of standard instrumental sounds in one's sample library, as well as more exotic versions to play with.

If the McGill series of samples is anything, it is certainly complete. For all but a few instruments, every note in the instrument's range is included, and there are a lot of instruments here. Need a double bassoon for your song intro? A renaissance great bass recorder for your period drama incidental music? With a set of McGill CDs on your shelf, you can be sure of a wide variety of sounds to draw upon — all you need is the time to transfer them to your sampler, and that's the difficult bit.

When sampling CDs first came out they seemed like a great idea, but like all great ideas they seem rather greater at first than they actually are, and the snags soon became evident. Sampling CDs are the next to next best thing to sampling an instrument yourself — you get excellent sound quality and the notes are usually very well played. The drawback is that recording the sounds takes you only halfway to decent programs on your sampler, because you still have to work on combining and manipulating the basic samples. It is never possible to include as many multisamples as you would like — unless you have a 32 megabyte S1000 or a Synclavier — so you have to choose your notes carefully, and choosing notes which fit comfortably together side by side on the keyboard, at the split point between two key groups, is work which requires much trial and error. The ultimate in sample libraries are found on CD ROM, where this exacting work has already been done for you by experts, and the sounds are therefore ready to play. My introduction to CD ROM was on the Emulator II, and I can compliment the guys at Optical Media, whose CD ROMs I used, on some great work in this field.

Nevertheless, even if CD ROM will be the sample medium of choice in the future, ordinary sample CDs are a lot cheaper and a lot more accessible to the average user now. I don't have a CD ROM compatible system of my own yet (I'd like one, but I can afford to wait a while to see how the market develops) so sample CDs are of great interest to me. What I need are samples which are well recorded, without effects, and above all are usable when I transfer them to my sampler. I have had CDs in the past which had all the notes for the instruments covered, but although the playing was good, it wasn't good enough. The notes must really be played very evenly, so that they will work together on the keyboard. So let's go through the McGill library disc by disc and see how it shapes up.

There are a million ways any stringed instrument can be played, so any sample library must inevitably exclude around 999,994 of them, as does this disc. Despite the oft-repeated advice to samplists to sample sounds without vibrato, these strings are played with a moderate amount. The reason for this is that a violin played without vibrato just doesn't sound like a violin, even if you add some pitch modulation in the sampler. The same applies to the other strings. The sounds here — bowed, muted, pizzicato, natural harmonics, artificial harmonics and martele (hammered) — are well played, but as with other solo string samples I have tried, they don't work particularly well on the keyboard. I suspect that this is just a restriction of the keyboard interface, and we need to make some technological progress in this area From the highest note of the violin down to the deepest double bass note, nearly all the notes would be usable as samples, with very few exceptions (such as notes which wobble at the start). One curiosity is that the note names follow the convention where middle C is called C4, instead of the more usual C3. The disc also contains a bowed violin ensemble in four playing styles.

Wind instruments always work much better on a keyboard than solo strings and all the instruments here are very good, apart from the flutes which have a tonguing noise at the start of each note (which can of course be edited out in the sampler). I'm looking forward to making some rich sounding music with the alto and bass flute samples.

You can't have too many alternative piano sounds in your sample library and this disc provides another good one. Two 9' Steinways were used, one for loud samples and the other for soft — all 88 notes of each. The plucked piano sounds (created by plucking the instrument's strings) are also very interesting. The percussion sounds are all good, as they should be for instruments which adapt themselves so well to sampling. The saxophone samples contain excellent raw material, but as always with this instrument it is hard to create a program that works well on a keyboard.

Some excellent material here, including natural and 'power' sounds. There's a particularly comprehensive tympani set, with both single strokes and roils. The informative booklet (which comes with every CD in the series, if you buy them separately) and the provision of index points (for those CD players that can use them) makes it very straightforward to find the sound you want on this disc, or indeed on any of the discs in the set.

'Rock strings' really means 'guitars and bass guitars'. The six basses are all good, and the guitar sounds are as usable as electric guitar samples ever are — ie. not very, but that's not McGill's fault.

A good idea. If you are going to sample Latin instruments, why not have them play a Latin rhythm pattern which gives you the notes you would want in any case, extra alternative versions of notes, and a possible loop to thicken up your percussion track? Not all the instruments are recorded in this way, but there is plenty of good material on this disc. Highly recommended. There's also an accordion, for some reason.

This is the one you have to listen to. Do you know how to create a rhumba rhythm, a mambo, a compasa, a wawonko (!) and others? No? Well they are all here, in various versions. There's also a trumpet which seems to have got lost from another disc somewhere.

I have to admire the guitarist who played all the complicated jazz chords, in all the different keys, on this disk — there isn't one fret buzz in the whole lot. There's also a good selection of acoustic and electric bass sounds, brass, vibes, and some saxophone growls which might come in handy one day.

There's a lot of harp on this disc, with many combinations of different chords and glissando styles. Amongst the other sounds are solo strings and winds, this time recorded without vibrato.

If you want to recreate the organ of St Paul's Cathedral in your living room, this is the disc you need. The organ is actually a Rudolf von Beckerath 1961 baroque-style organ (which will mean something to organ enthusiasts). McGill will do a roaring trade selling this to church organists who want to practise at home. Otherwise, there are some grand sounds here for all of us, such as that of the organ being switched off and switched back on again while playing a complex chord.

This was the only disc that wasn't included in the review package, but it looks so interesting that I'm going to have to try and get hold of one. It includes viols, lutes, crumhorns, recorders, cornet, shawm, baroque oboe, oboe d'amore and harpsichord.

If someone had given you this set of CDs as a Christmas present, you'd have been well pleased — and also very busy over the holiday period. There are over 6000 samples in the set (I didn't count them myself), and they'll last a lot longer than the turkey sandwiches. Just remember, while you are transferring all these sounds to floppy disk, to save yourself some time to make music with them.

...but is it professional? 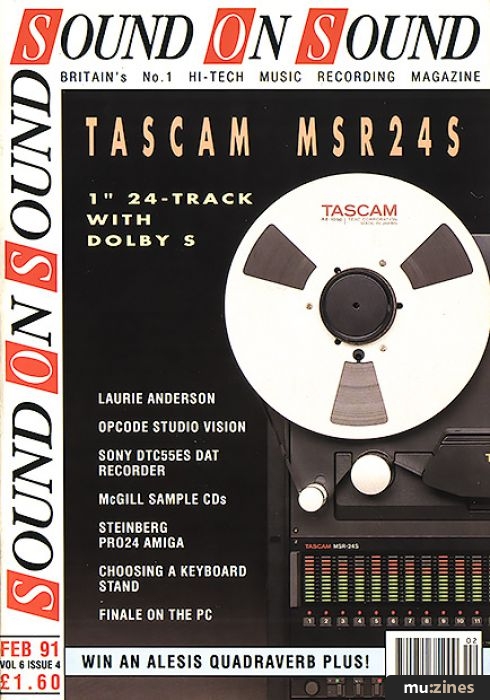