The S50 in a rack-mounting box? Whilst the S550 is indisputably the son of the S50, it boasts eight audio outs, filters stolen from the D50 and a few other tricks besides.

WHEN THE FIRST wave of 12-bit samplers was being announced, the Roland S50 looked like being the winner of the "impressive specification" category. Unfortunately, custom chip problems delayed the release of the S50 for almost a year, and when it was finally released, many of the promised features were not implemented. Roland rectified this with the release of the S50's version 2.0 software, and succeeded in making people reconsider the S50 as a new, viable sampler. They also released a rack-mounted version with some worthwhile hardware upgrades - enter the S550.

LIKE THE S50, the S550 boasts 16 voices (most samplers have eight) with sample rates of 30kHz and 15kHz (a touch on the low side, compared to its competitors). The back panel features eight individual outputs (a large improvement over the original S50) and a single mix output. Sample memory is double that of the S50, totalling 28.8 seconds at 30kHz (that works out to roughly 844 Ksamples, or 1.266 Mbytes given 12 bits per sample), divided into two blocks and two banks per block (thus limiting any one sample to 7.2 seconds at the highest rate). Unlike some other double memory upgrades (Prophet 2000, Emulator II and so on), all samples in all banks may be played at the same time - thankfully, there's no bank switching scheme. The operating system is stored on disk, and the system and sounds are saved using the familiar 3½" disk drive. It takes two disks to fully load the machine.

Thirty-two Tone locations are available in each bank of the S550. A Tone is Roland's parlance for a set of parameters (envelopes and the like) and a sample (or Wave). Different Tones can share the same Wave. There are 16 patches (key assignments) per block, yielding 64 tones and 32 patches overall. Up to eight patches may be played at the same time (on the same MIDI channel or different ones) making the machine nicely multitimbral. The catch is that the manual forewarns you of delays if too many patches are on the same MIDI channel (I heard some strumming when I got up to three - annoying for the delay, but the imprecision sounds more realistic if you can deal with it).

Each patch may be assigned an individual output and have its level set in the screen where the patches for playback are selected. Each Tone also has an output assignment (such as different drums going to different outs), and this can be invoked by selecting 'T' in the output assignment screen (more on user interface shortly). Unlike some individual outputs that are monophonic, each one on the S550 is polyphonic, so mixing between different patches is no problem. Voice assignment modes include two variations on dynamic allocation (a free-for-all where whoever needs a voice gets one until all run out) known as Last Note Priority and First Note Priority along with Voice Fixed mode. The difference between the first two priority modes is whether old voices get stolen or new notes ignored if the demand exceeds 16. Voice Fixed mode allows a fixed number of voices to be assigned per patch. Instead of allowing you to decide exactly who gets how many as you would expect though, there are 22 different combinations of one to all eight patches getting 2-16 voices to choose from. You may have to juggle which patch appears where in the list of eight to get the assignments you want.

In this fixed mode, notes requested over and above the voices a patch has been assigned are ignored. Unfortunately, there's no combination that gives a patch just one voice for monophonic playback - you have to play tricks to force it. The same goes for having one wave cut off another (such as open and closed hi-hats) - you have to set up two waves on the same patch that each act as if they're taking up two voices, and give the patch two voices in the allocation scheme. These are minor gripes that'll buy me little sympathy, but I'm lazy - I hate having to be clever to do something I consider normal.

ROLAND'S SAMPLERS ARE the first instruments at the reasonable end of the price scale to feature a CRT and mouse (or other advanced input device). As a matter of fact, one of the first notes you run across in the manual is "To operate the S550, a CRT display is necessary". Roland do not supply a CRT with the S50 or S550, nor do they sell one - you'll have to acquire a monochrome or RGB colour monitor yourself. In selecting a color monitor, pay careful attention to the specs provided in the back of the manual, and the specs of your prospective monitor - "RGB" is a blanket term for a group of widely incompatible standards, and you may get stung. I used an inexpensive monochrome monitor for my tests with only minor hassles (when something changes colour, it changes shades of grey - or green, in my case - on a plain monitor) and no compatibility problems.

The S550 comes supplied with a two-button mouse that connects to the front panel. An optional remote control panel is available (that the mouse plugs into), along with a graphics tablet. Upon powering up the S550, you must hold down a button on the front panel keypad to let it know what's connected - another minor hassle; I wish it could auto-sense it (for when you're bending over hitting your terminal strip, or power cuts out for a handful of milliseconds).

The screen operates a little bit differently to an Atari or Macintosh, but is easy to become familiar with. In reality this baby is far quicker to get around on than any cursor control, continuous rotary knob or LCD I've ever twiddled or peered into. My only lingering gripe is that the mouse doesn't have a pointer - you tell where it is by what highlights as you move it around. On the flipside, the mouse buttons work as inc/dec controls when you get there, which is a nice touch.

The obvious thing that this brings to mind is comparisons between this and other visual sample editors that are currently available. The S550 has some sound editing features built in, such as mixing, truncating, smoothing, crossfade looping, digital filtering, wave drawing and so on, that all work but don't have quite the power of dedicated software packages. The S550 has some nice features (such as keys or patch letters flashing as you're playing them) that make monitoring and troubleshooting in a MIDI setup that much easier. For extreme sample editing, a stand-alone package is still better (Roland encourage development of such software), but having everything else onboard is a definite plus point for the S550.

No matter where you're editing it, though, making the user perform contortions like going back into Play mode to audition changes made in Edit mode is not nice. On the positive side is the fact that the operating system seems to reinitialise parameters in all the right places. A mixed blessing is making you save any new creation (after a mix, for example) in a new Wave location. It's a pain to then have to go back and reassign a Wave to a Tone, but this creates an automatic backup (and there's enough memory in this machine to deal with it) whenever there's a risk of damaging your work. Personally, I'd trade speed of operation for safety, but I'm told not everybody's as reckless as me.

As mentioned, the S550 uses a disk-based operating system. The ease with which these are updated is great (the unit I have has version 1.0 software; they're up to 1.11 now with additional features such as the ability to read from and write to S50 disks). However, machines that have to address the disk for some (Ensoniq EPS) or all (E-mu Emax) of their functions drive me crazy. In Roland's case, there's a separate Utilities disk that needs to be inserted into the drive whenever you want to sample or manipulate the sample. Personally I'd like enough memory onboard to hold the operating system - which is available in the form of the HDIF interface for use with the Macintosh hard disk.

ONE OF THE most significant features missing from the S50 that were added to the S550 were Time Variant Filters (also found on the D50). Again speaking personally, I don't consider a sampler to be an "instrument" unless I can modify the timbre in real time - it's just a digital tape deck otherwise. In spite of this, however, it is nice to have variable digital filters. The filter is of the low-pass variety with resonance, and includes the eight-point and slope envelopes that accompanied amplitude and pitch on the S50 (and yes, you can edit them with a mouse - this is where graphics come in really handy). On top of all this, the filters sound rather good.

Another point that needs applauding is the sample mode that is always filling memory, and allows you to say "keep everything before I hit this button" - great for catching things on the fly. This can be used as a pre-sample buffer for making sure the starts of samples don't get cut off.

THE BOTTOM LINE is this: the Roland S550 is a very solid sampler. It has a couple of quirks, but nothing that really detracts from it. Having a mouse and CRT to control the machine bumps up the price and development time a bit, but it results in a machine that's a lot quicker to use. I think I'd be safe in saying that some of the S550's features will set standards that other serious samplers will have to match. 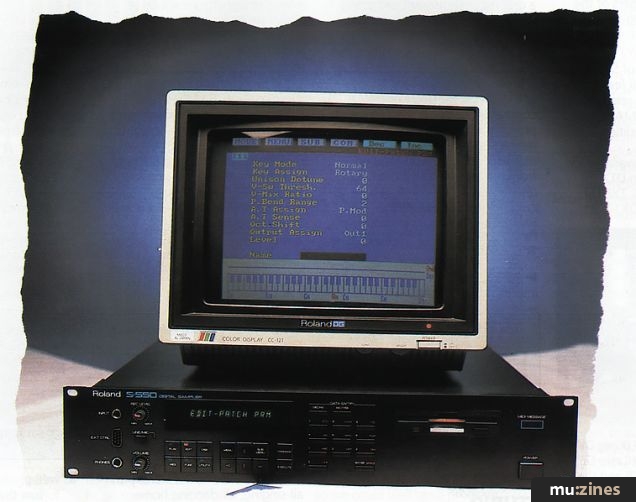 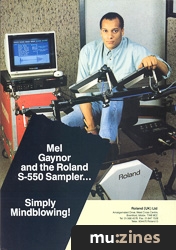 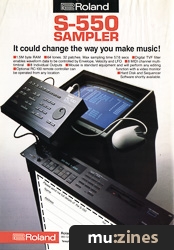