Discover how to make your acoustic feel and play as speedily as a light strung electric with guitar technician Adrian Legg.

Playing an acoustic doesn't have to be a finger straining business. Guitar technician Adrian Legg shows how an acoustic can feel like an electric with the right amount of tinkering.

Until recently, the musician who wanted to play both acoustic and electric guitars has been faced with a technique problem — a temporary flowering of one style at the expense of the other, or worse, a retarded progress on both. Doing two lots of maintenance practice is all very self-disciplined and so on, but in reality, usually one style gets neglected.

While add-on transducers have enabled the acoustic guitar to be used in more varied playing situations, essentially the instrument is still acoustic and still has to be set-up and strung like one, and that means heavier than electric.

Theoretically it's possible to use an electric for some picking things — Atkins-type stuff and so on — but the electric guitar makes a very lonely-sounding solo instrument, lacking the harmonic richness and character that enables an acoustic to sound complete.

Similarly, guitar duos (a useful way of gigging due to music licence laws etc, and general economics) sound complete with two acoustics, but as soon as an electric is introduced, merely sound like the bass player couldn't make it.

The simple answer to the dual technique problem is to string and set an electric as hard as an acoustic to eliminate the radical difference in feel. Unfortunately, that also eliminates a lot of the electric's scope. How much more satisfactory if the acoustic could be set as light as an electric!

Well, the last couple of years have seen a rapid growth and technical expansion in acoustic/electric guitars, and my own search for a solution to the duality problem has come to a happy end. It's perfectly possible to take a decent quality acoustic/electric (piezos that is, not magnetic) and regard it as an electric capable of producing an amplified tone that will stand solo or duo work.

As a test I use the ability or otherwise of the guitar to take a 1.0mm first string action with .008 to .040 strings. It's really quite astonishing how many guitars will take this and still produce a credible sound.

The more traditionally a guitar has been made, the more likely it is to need a little helpful e.q., and it's slightly ironic that the most untraditional guitar of the lot (where my own personal and professional allegiance lies) should arguably produce the most effective acoustic type sound.

But remember that .008 to .040 is actually lighter than the average electric set, and it becomes clear that the way is wide open. I have been chancing it and using an acoustic/electric set light and low as a direct substitute for an electric, no backline, straight into the PA, and have got away with it by a wide margin.

The set-up is not as tricky as it might seem. Aiming for a 10-15 thou" relief figure is fairly essential — too low a relief and the rattles will be unpleasant; too high and intonation will suffer.

Action height adjustment varies according to the way the pick-up is fitted. On Ovations, the pickup unit lifts out and shims can be removed from underneath to lower the action, or added to raise it. Be careful with the cable — it's located at the bass end.

More traditional guitars (like Takamine) have the pickup under the bridge saddle, and this saddle can be lifted out and the bottom filed down to reduce height just like a normal acoustic.

On bolt-on guitars, the best method of altering action is to undo the bolts and shim under the neck to pitch the neck back, the same way as a Tele action would be altered on running out of adjustment at the bridge.

It makes sense where you're not sure of pickup structure or location to check things out with the manufacturer or distributor beforehand so you don't foul up an expensive part.

The other major problem is still feedback and the most effective way of dealing with this is to damp the table. If you locate and play your worst feedback notes you will find that by touching the soundboard at particular points, you will be able to reduce feedback or cut it out nearly altogether if you press firmly.

Once you have located these points, a good lump of Blu-Tac should be stuck inside the guitar on and around these points — this will slow down response at these points, and the stuff can be simply pulled off for straight acoustic sessions.

The solution for any remaining feedback is cotton wadding (simply cotton wool between layers of light fabric available in large quantities from finish and sundries suppliers like Marrable of Waltham Cross or F. T. Morrell of Acton). Obviously, when pushing this stuff around inside a guitar, you must watch out for cables.

The usual place for intonation problems is at the nut, where open chords can sound out of tune simply because the nut action is too high and fretted strings are being bent. Nut slots must be deepened till the height of the open strings over the first fret is the same as string height over the second fret when the string is stopped at the first.

It's simple to check this against a small rule. Intonation on the 12th fret isn't too much of a problem when the action is low, but on straight saddles, a judicious bit of filing to move the string take-off point forwards or backwards may help. Generally, finger pressure or a bend will take care of inaccuracies.

Tuning distortion from capos is tricky on gauges this light — so far I've been okay with a Heriba nylon job, and on low fret bead it's okay with a Wilkerson. I've found that Dunlops and Picker's Pals require a bit of retuning. Does anyone still use the Hamilton Cadillac bumpers?

Technique? You play it like an electric. That actually sounds simpler than it is — there is a residual psychological quirk. I found that where I had bags of extra volume available via a volume pedal before feedback, I hit the strings harder rather than put my foot down — it took a couple of gigs and a few busted trebles before I got over it but it freed up the traumatised right wellie.

Flat-picking and rhythm work sound fine with a very light pick — too hard will force the strings off pitch, and hooking nails need to be kept down to avoid uneven picking. A light touch of compression will also take care of any string imbalance — there is a question of balancing between sensitivity and feedback involved.

Harmonics also need to be more accurate, but a compressor will help by taking up the difference in volume. Watch out for undamped bass strings when going for a high one, though.

By re-stringing in this way, the changeover problem between electric and acoustic is virtually eliminated — one lot of practice serves equally for both guitars and a day spent on acoustic doesn't foul up an evening on electric, and vice versa.

Also, it's rather nice to toddle off, troubadour-like, to a gig without being weighed down by half a ton of amps, pedals, leads, plugboards, etc.

Hands Across The Wire 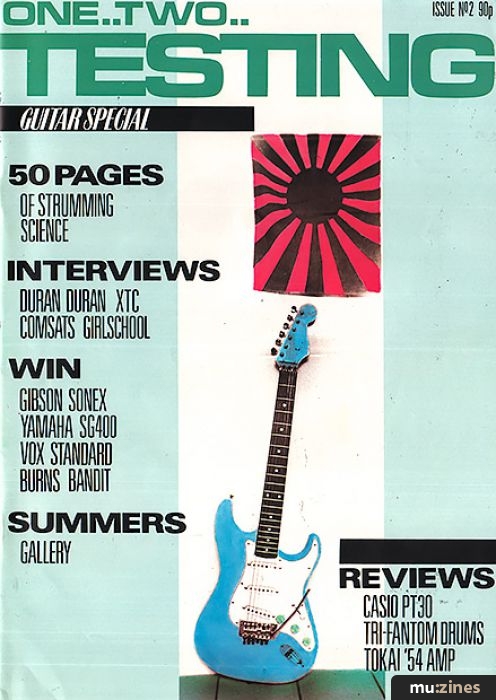 > Hands Across The Wire