Ian Boddy concludes his look at how to take electronic music on the road by examining his own live set-up and how it's put to use in a concert situation.

Last month, musician and composer Ian Boddy outlined some of the reasons why an electronic music concert is such a rare occasion, and gave a few hints as to how such a concert can be mounted with the minumum of fuss. In the second and final part of his feature, he describes his own live hardware set-up and explains how it's used in performance. 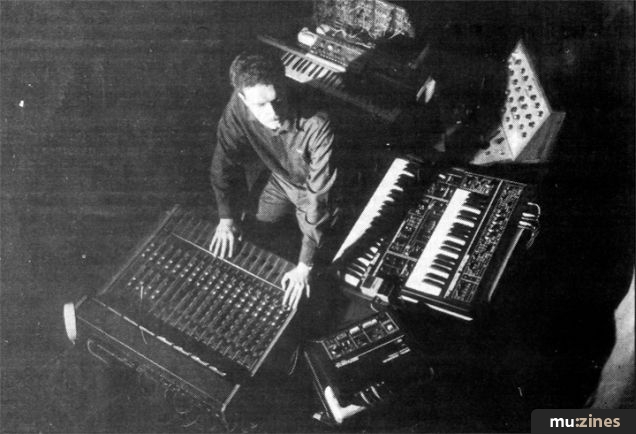 My present equipment set-up comprises a number of different electronic keyboards, drum machines, sequencers and so on, and was shown last month in the form of a schematic diagram. That drawing has been reproduced below for those who may have missed the last issue (shame on you).

Looking at the diagram, the first thing that probably strikes you is that no one piece of equipment stands alone: all the machines link together so that they form a single working unit. Obviously, interfaceability is all-important for this degree of interconnection to be achieved, and with this in mind I've found myself opting for Roland gear in the main - with one notable exception. However, the introduction of MIDI should now be making it possible to mix equipment of different makes with more success than was previously possible, so you may well find sticking to one manufacturer's products unnecessary.

The two main keyboard instruments are the Yamaha DX7 and Roland SH2 monosynth. The former handles all the polyphonic playing (as well as some lead lines) while the latter takes on most of the solo work. The SH2 also comes in handy for rumbling bass drones - courtesy of two VCOs and a sub-oscillator - which I use quite extensively during link passages between pieces.

The DX7 is of course programmable and this makes using it live a very straightforward proposition, but don't despair if you haven't got access to a programmable polysynth as such. I managed for some while with only a Moog Opus 3 ensemble machine for chordal playing, and before that I had to try to make the most of an ancient Jen string synth... The DX's output is split, the direct signal passing through a volume pedal and the other being routed into the depths of a Roland System 100M, of which more anon.

A TR606 Drumatix is the main percussion source, while the System 100M (and some backing tapes) are also put to use in this department. I find the 606's Track Compose feature is rarely used in performance, since it's not unusual for me to require 20-30 minutes of rhythm backing during a full set, and this considerably overshoots the machine's memory capacity. Instead, I select different rhythm patterns manually during performance, making use of the chain facility to link four such patterns together.

Not surprisingly, the TB303 Bass Line plays preprogrammed bass patterns in a similar manner to - and in conjunction with - the TR606, the two being linked together via the standard five-pin sync sockets. However, I find the Bass Line's output rather stale if left untreated, and it's for this reason that it spends most of its performing life being routed through a flanger in the interests of thickening up its output.

Roland's CSQ100 digital monophonic sequencer provides a second preprogrammed melody line, usually in a higher register, and note pitches are programmed via the SH2 before each concert. Timings, on the other hand, are programmed into one of the trigger (tomtom) channels of the Drumatix, the appropriate trigger output being linked to the step input of the CSQ. The CV and trigger outputs from the 606 (split as shown in the diagram) are taken to one channel of the System 100M, which supplies the required synth voice.

By today's standards, the CSQ100 is a fairly simple sequencer, its storage capacity being limited to two sequences of up to 84 notes each. However, the machine is extremely easy to program, so much so that I have occasionally found myself reprogramming it live during link passages.

As can be seen from the diagram, the CV and Gate outputs of the SH2 are linked to the corresponding inputs on the CSQ100. Normally, this arrangement would cause the sequencer pitch to change key every time a different note was played on the SH2. However, by placing a volume pedal in the Gate signal line, it's possible to interrupt the trigger pulses from the SH2, without which the CSQ will not change key even though it may still be receiving a stream of CV information. In effect, the pedal is being used as a form of switch, so that I can decide exactly when to change the key of a given sequence.

Finally, all three rhythm section units can be stopped and started in sync by using a footswitch, linked to the start/stop socket on the TR606.

The Roland System 100M is used to perform up to four functions. My own system comprises enough modules to provide two separate voices, one of which is set to give melodic voicing while the other supplies a percussion effect or a treatment for another instrument.

The melodic voice is usually made up of two VCOs passed through a VCFA/CA chain: an envelope generator controls the VCA, while an LFO provides vibrato. This is a fairly standard synth voice, but variation can be injected by, for example, frequency-modulating one VCO by the other or using the Sync function to phase lock the oscillators together, modulating the locked VCO.

The sound can be controlled either externally using the CSQ100 or internally via the 4CV polyphonic keyboard specifically designed for the System 100M, in which case the modular system provides an additional lead line, duophonic if required.

The 100M's second channel is used primarily as a percussive effects set-up through which external synths (in my case the Yamaha DX7) can be processed and/or white/pink noise introduced as an additional percussion voice for the TR606 Drumatix. The second trigger output from the drum machine is split and used to trigger an envelope generator and sample and hold module. The former controls the volume contour of the overall sound, whereas the latter controls the VCF cutoff frequency to provide timed timbral changes. The sample can come from a wide variety of sources (in this case an LFO) and a wide range of effects can be obtained depending on the LFO's waveform and rate, the latter not being controlled by the 606.

The concert set-up is usually completed by the addition of a borrowed VCS3 - used for sound effects, what else? - and a Roland RE501 Chorus Echo, as well as a tape recorder of some description for whatever backing tapes I might be using. Mixer is an Alice 12-8, borrowed, like the VCS3, from Newcastle Media Workshop, though I have used several other models, depending on concert venue.

It should now - I hope - be apparent why I consider my own equipment array to be a single working instrument. It is not particularly expensive or difficult to use to its fullest extent, but the interconnection possibilities are sufficiently wide to allow it to be used in an entirely different way at each individual performance. 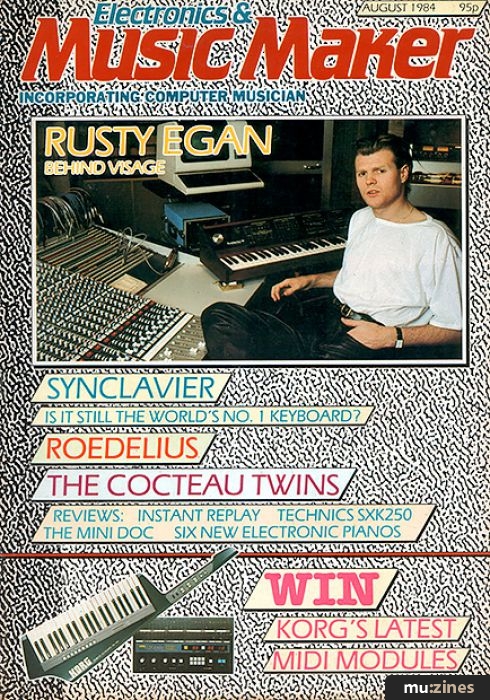