If you thought noise reduction was just a trick for boosting treble on cassettes the Symetrix 511A could change your attitude as well as your recording practices.

WHENEVER ANYONE REFERS to noise reduction, the names that come up are Dolby and DBX. Now, while there are many different types of these two market leaders, some aimed specifically at the professional field, most have one quality in common, which is that the original signal is encoded at some point in the recording process and then needs to be decoded at some point further on, typically at playback on a cassette machine.

The alternative is to use a single-ended noise reduction unit which can be used with existing material and doesn't need special controls on the playback unit. The Symetrix 511A is one such piece of equipment.

THE UNIT IS encased in a 1U-high rack mount and sprayed in a rather fetching gun-metal grey. The front panel is split into two identical halves for the left and right channels with a stereo link push-button between them. Each channel has a high-pass filter, a downward expander section with threshold, release and ratio controls along with four yellow LEDs to indicate the amount of signal reduction, and a dynamic filter with a threshold rotary control and four red LEDs to show at which frequency the filter is working.

The rear panel is rather unusual in a couple of ways; firstly, it has ¼" jack sockets for audio inputs which can accept either balanced (stereo) or unbalanced (mono) signals without any internal alteration and also sports unbalanced output jacks. Secondly, there is a terminal block consisting of balanced audio inputs and outputs as well as send and return for the side-chain with individual earths - although it's a pity that the labels above the blocks don't line up with the screw terminals.

I usually begin hardware reviews without commenting on the bird's nest of cables and poor soldering jobs that often appear, but in this case I have to say that the internal construction is absolutely superb and I cannot remember seeing anything to beat it. However, there are a couple of bad points construction-wise: the mains cable is non-detachable and uses a cable grip, which from past experience is sure to chew its way through the cable. Add to this the fact that there isn't an on/off switch of any kind - the unit is on as soon as it is plugged into the mains - and we have a potential nightmare. A final gripe in this area is that the terminal block is supposed to be screwed to the circuit board but isn't, which puts far more strain on the hard wires soldering it to the PCB than is to be recommended. I certainly found it difficult to unscrew the terminals.

A FEW NOISE reduction techniques do not require the signal to be coded in any way. This machine incorporates three of these.

The first is the principle of dynamically filtering the audio input: when high signal levels are present, hiss is masked but becomes audibly discernible when the audio level drops, making tape hiss rather pronounced. When the high frequency component drops below a user-determined threshold level, the filter comes into operation and cuts the top end which contains the unwanted hiss. The only drawback is that such a filter is program-dependent, and unless it is well-designed, will be audible in operation.

Another method is that of downward expanding. This causes output to fall by a greater amount - set by the expansion ratio - than the input once the signal level is below a set threshold, so reducing noise across the entire bandwidth. Once the level re-crosses the threshold, the release control dictates how long the signal takes to return to normal. This unit uses a method called "soft knee" (funny, I always thought that was a terminal illness) which makes operation a little more natural-sounding to the ears.

The final offering is that of the hi-pass (or rumble) filter, which sharply filters away any audio signal below 50Hz and is often seen on hi-fi amplifiers to deal with bearing rumble on record decks.

TIME FOR A little theory. The input signal is split into two paths, one of which passes through a circuit called the detector which senses changes in the level of the incoming signal and is affected by the front panel controls. The second path is that which heads for the output and meets up with the downward expander and the dynamic filter, each of which are controlled by the output from the detector. Now, let's say that we wish to alter the control signal before it reaches the detector to perhaps boost the bass, so causing the system to respond more strongly to bass signals. The control signal is sent out through the side-chain to an external processor, typically a parametric equaliser, and then returned to the detector circuit.

This idea works particularly well in compressors and expanders, allowing them to be either more or less responsive to certain frequencies, and since the control and audio signals never meet up again, the equalisation applied to the side chain has no effect on the actual audio output.

ENOUGH OF THE technicalities, let's get down to everyday applications. One particular problem that occurs very frequently in a studio environment is that of headphone bleed-through with vocalists (despite the closed headphone designs that now exist). Furthermore, a favourite trick amongst singers is to take one headphone off and bury it behind their ear, causing feedback to be induced if the head moves from side to side. One possible solution is to use the expander to ensure that when no vocal is present, the input is shut off. Most people use compressors to limit the vocal signal going onto tape and, while some of them have what are usually termed "expander gates", they are often preset and inadequate. In this context the 511A behaved well, with the ratio set to 1:2 or less and the threshold and release controls set up subject to the strength of the vocalist and the amount of bleed respectively.

It may appear that the expander works in a similar manner to a noise gate, but the two are very different in practice. A noise gate simply shuts off an input once a threshold has been reached with the speed proportional to the attack setting. The effect of a downward expander is dependent on the strength of the input and the ratio setting. An example of the difference in operation is the following: suppose that a sequenced snare drum has been recorded with its velocity set flat, ensuring that the incoming signal is of a constant strength and consequently can be gated to ensure minimum extraneous noise. If, however, the snare were of varying velocity, which is of a more natural manner, a noise gate would have trouble coping with the inconsistent input - while a downward expander would simply treat each snare as a separate entity and effect it slightly differently, keeping the feel alive. Again, I experimented with this, using different percussive sounds and was most impressed with the fact that I couldn't hear the expander operating in any way, which is a lot more than I can say for my gates.

No mention yet of the dynamic filter. Well, personally, I found it a little awkward to use, having tried it with a variety of different programme material. The effect can be heard quite clearly - the end of the material is dulled and if there is a fair amount of high frequency existing initially, the effect is very pronounced. The only degree of real success that I had was in removing quantisation noise from the tail end of DX basses, which is usually very difficult to achieve without EQ'ing the life out of the timbre.

In stereo mode, the left channel controls and side-chain control both sides, allowing true stereo to be effected. I tried this with a tired old ferric cassette and transferred the music via the 511A to a new tape with more than acceptable results, due to the tape hiss being pulled back in a fashion that I couldn't really hear. In fact, I found that in most contexts the expander was invisible in operation and was quite happy to have it across the output of my mixing desk when mastering. I can certainly attest to the negligible noise output of this unit. The stereo image seems to be totally unaffected by using either the expander or the dynamic filter - so much so that after a while you actually forget that it is still in line. In view of this it would be rather useful to have an LED above the stereo switch to remind you.

Bearing in mind that the downward expander only comes into operation when the input falls below the set threshold, there are times when there is too much inherent hum to permit this to happen, and this is one occasion when the rumble filter can be used to remove this component without having too adverse an effect on the material - how many people use bass EQ below 50Hz?

The only major failure I encountered was achieving success with the side-chain. I normally use an Accessit parametric on the side-chain of a Drawmer DL221 to boost the high-frequency content of the detector, and so cause the compressor to act more strongly at the top end of the spectrum, which is especially useful for de-essing vocals. I tried similar ideas with this unit but couldn't really hear any difference - perhaps it was working in a subtle manner, but so much so that I felt the side-chain to be irrelevant.

I HAVE MIXED feelings about this one. On the pro side is the downward expander, which is about as good as any that I have seen, along with the general quality of the unit in respect of noise and opacity of effect, excellent stereo imagery and a manual which even includes the circuit diagrams and PCB layout for ease of repair. On the con side is the fact that I am less than happy with the performance of the dynamic filter, which is far too noticeable in operation, and the safety aspects of the mains. At an RRP of £565 it is fair to expect a degree of excellence with regard to operational quality, but it is the user who decides whether or not he or she is prepared to accept certain shortcomings in order to obtain the particular qualities that the Symetrix 511A offers.

A Night In The Studio 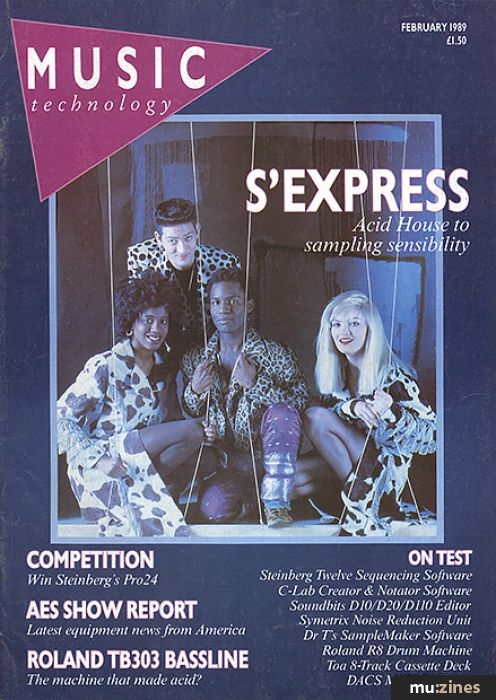 > A Night In The Studio