Over the past couple of years, the name Chris Eccleshall has become synonymous with fine, hand-built guitars, mandolins, dulcimers and virtually anything that could be termed "a fretted instrument". Chris operates from a small workshop in Ealing, the decor suitably provided by an assortment of guitars, moulds, and patterns hanging from the walls. The furniture consists of workbenches, power tools and boxes of spare parts. His reputation has come about almost completely by word of mouth and now numbered among his customers are Eric Clapton, Pete Townshend, The Sweet and Rory Gallagher.

After leaving school, Chris started an apprenticeship as a metalworker but soon decided it wasn't for him, and consequently left to "hitch-hike around for a while". His travels took him to Hastings, where he became assistant to John Howard-Lucy, a well-respected violin maker. John was quick to recognise Chris's talent and later placed him at Hills of Bond Street, virtually the academy of violin manufacturers.

He stayed with Hills for two years, where he found himself working on violins worth as much as £15,000. His next move was to Ealing Strings, mainly to work on violins, although any guitar brought in for repair would inevitably be passed to Chris, who by this time was developing a keen interest in that instrument. So much so, in fact, that he spent most evenings making guitars in the shop's upstairs workshop. He eventually decided it was time for him to branch out on his own and so acquired two garages further down the road, which he converted into workshops.

It was a labour of love for Chris. He started off with a handful of tools and his final week's wages from Ealing Strings. "It was terrible for the first six months." Chris recalled. "I was living on egg and chips for months, and I had hardly any money. But word gets around and I started getting work.

"Rory Gallagher was the first main customer. He phoned me up at home one day and said he had a lot of stuff that needed sorting out, so that was about two month's work in itself. The word gets around because you'd get a couple of roadies coming round with repairs, and they'd meet other roadies at gigs and tell them, and so it would go on. Since then, of course, it's snowballed and I can pick and choose now."

I wondered if Chris had any particular technique for building guitars? "Well, originally, it was very much trial and error for me, because I had no form of reference. As I've gone on, I've noticed that the methods I use are very similar to the methods used by everybody else. There are only certain approaches you can take for making a guitar.

"On an acoustic guitar for instance, you bend the ribs on a hot iron to a rough shape and then they're put inside the mould, and held with cross-clamps. The top and bottom blocks are glued in, and the linings are glued to the ribs. The back is made separately jointed and then thicknessed, and the cross-struts are then glued onto that, so the back's a complete unit. Then the back is glued onto the ribs while they're in the mould to hold the shape, and trimmed round flush. The front is made as a separate part, jointed, thicknessed, the soundhole inlay put in, the soundhole cut out and the struts glued in.

"On 90% of the acoustic guitars I make, I use the standard Martin strutting system because it tends to give the general sound that people expect to hear from a flat top jumbo guitar."

At first, Chris only built acoustic guitars but after many requests from his regular customers, he began to make electric guitars and he now does quite a range of electrics.

Chris prefers to make acoustic guitars, although he feels electric guitars are very valid instruments. "Making acoustics is individually more rewarding for me because there's so much more to it. In an electric guitar, the neck is so important. I tend to spend a lot of time on the neck and fingerboard. The bodies tend to be pretty straightforward once you're used to making them. I tend to do mostly standard shapes because whatever you try to do with a shape in this day and age, someone has probably already done it, and a lot of the guitar designs are so good anyway. For instance, a Les Paul Junior is the perfect design anyway, so why try to change it? I do my own designs as well, but mostly I'm asked for standard shapes. It always amazes me — people can go into a shop and just take a Gibson or Fender down off the wall, pay for it and walk out with it — yet they come to me instead and are prepared to wait up to three months for one."

I wondered what Chris thought of mass-produced guitars, bearing in mind the fact that certain people do plump for his guitars, rather than the better known American makes. "They vary a lot. It's very easy to put a blanket thing on particular makes. I personally like factory made guitars but it's a different world to that which I work in."

Chris spends about 90% of his time building guitars, and the other 10% on repairs. He only does repairs now for existing customers, as it can be very time-consuming. He pointed to a pile of broken necks and smashed bodies. "That's something I find hard to take," he said. "I made a few guitars for The Sweet and one literally only lasted a week. It came back in about seven pieces. I do some repair work for Pete Townshend, but no way will I build a guitar for him. I know how it will end up.

"On the subject of smashing up guitars he made a interesting observation, he told me he had a couple of SG's and always used to polish them and generally look after them until he visited the Gibson factory in the States. He saw rows and rows of identical guitars, all lined up on a conveyer belt. One person would be putting a control knob on, and the next person would be tightening it up and he thought to himself "Why bother?" Now, smashing guitars doesn't bother him.

Chris has come a long way in a relatively short time, but still manages to keep his prices down. "When I started, most of my time was spent doing repairs but I've managed to get more into the building side and get through the barrier of not just being Chris down the road who knocks up guitars now and then, but to be accepted as a professional guitar maker who knows what he's talking about and who gives value for money."

"The techniques of construction for solid electrics are obviously very different. I start off with the basic block of wood, which is first cut to outline and then the pick-up holes are routed out. When I first started, it was literally all done by hand. The outline was cut with a bow-saw, and then finished with a file for shape, and the recess pockets were done with a drill and chisel. It used to take hours and hours, but now it's a lot quicker with the router, which is a very high speed motor into which you can fit various cutting tools. It's basically for shaping up the bodies, but it can be brought in to shape the necks, cut the profile of the neck, cut the grooves to take the binding — in fact, it can do a million and one jobs.

"I tend to do most of the roughing jobs by machine, like cutting out the blocks of wood on a bandsaw, using the router for the fitting work like cutting out the recesses and inlay work, sanding machines for finishing sanding the wood because there's no way you can finish-sand a piece of wood by hand and then lacquer it over the top and get a good finish. All the rest is done by hand."

Which woods does Chris use?

"The woods tend to be pretty standardised for any guitars. On an acoustic guitar, I use either mahogany, maple or rosewood for the back and sides, mahogany or maple for the neck, ebony or rosewood for the fingerboard, and spruce or cedar for the front of the guitar. The different woods give you different tonal qualities. Rosewood is a very hard wood. When it's sanded smooth, it's a very reflective wood and gives you a very sharp, trebly sound; mahogany is a more absorbant wood giving you a nicer middle tone. My personal preference is for a mahogany guitar because it gives a nice, warm sound. To me, rosewood guitars are a bit too clean and harsh. For classical guitars, it's probably best to use rosewood to get that clarity. For an allround guitar, if you want to play flat-picking or finger-style, I think mahogany will give a better sound. It's a matter of splitting the difference."

I was amazed to find that it only takes three days for Chris to build a standard solid guitar from start to finish. "It can take longer," he explained "if the finish is tricky. I can spend three days on the woodwork and three weeks on the finish; building up the lacquer, colour staining and polishing it. It's probably the trickiest part of the whole operation, because it's got to be so good.

"The easy way out is the method whereby you bang on a layer of lacquer, sand the surface flat and then buff it up. That's all very well if you want a nice shiny guitar to hang on a shop wall and look pretty, but when you realise you're putting about a 1/6th of an inch of plastic on top of the wood, it defeats the object of spending time, trouble and care in shaping the wood up properly." 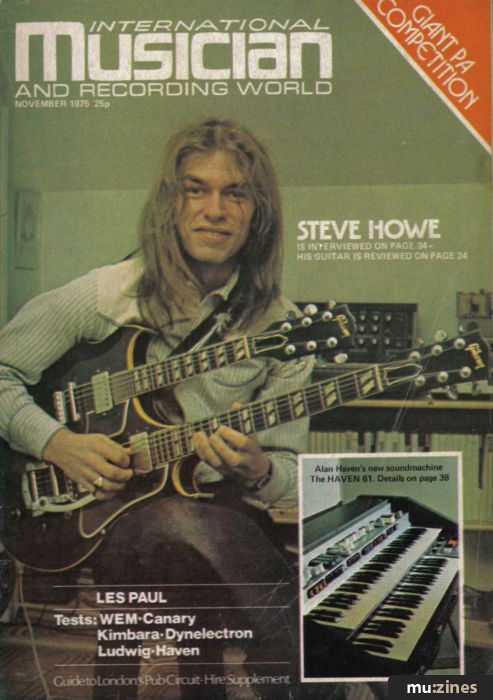