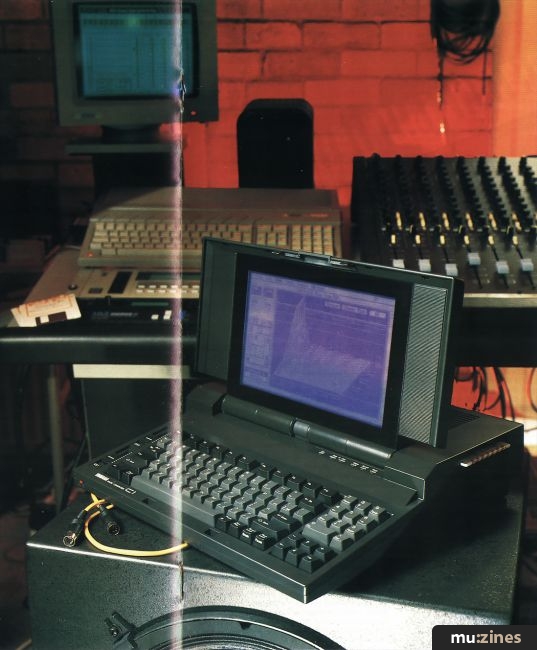 As regular readers will be aware, I am a bit of a PC fan when it comes to computers (although I have recently been bitten by the Amiga bug). I regularly use Macs and Ataris but actually prefer to use a PC for business (a Samsung) and for making music (I run Voyetra's Sequencer Plus MkIII on my Amstrad PC 1512 at home). It was therefore with great delight that I greeted Yamaha's announcement last year that they would be launching a PC-compatible portable micro for musicians, the C1.

The machine went on sale in the States last year but has only just been released over here: a wise move by Yamaha UK, for the intervening months have given the US music software houses sufficient time to modify their existing programs to take advantage of the considerable benefits of the C1's integral multi-port MIDI interface. The C1 does not use the industry standard Roland MPU401-compatible MIDI interface but this shouldn't present too much of a problem, as existing owners of MPU401-based music programs (the majority) should be able to trade in their current software for a C1 version quite easily. This is the case with Voyetra software, but best to check with your original supplier for details.

Spec-wise, the C1 employs the familiar 80286 chip used in all IBM AT-compatible computers, running at a clock speed of 8 or 10MHz (set by one of the rear panel DIP switches). It comes with 1 Mb of RAM as standard (divided into 640K base memory and 512K extended), one 3.5" 720K floppy disk drive located on the right-hand side, an internal 20 Megabyte hard disk with an average data access time of around 35 milliseconds, and a near-silent fan to keep the thing cool. Although it looks like a laptop computer, the C1 can only be mains operated.

Yamaha have opted for a backlit blue LCD screen rather than a gas plasma type, and this can be angled for convenience and folded down when being transported. The screen resolution of 640x400 dots makes the display highly visible and easy on the eye, with no flickering. Controls are provided to adjust contrast and brightness on the left edge of the casing. If you prefer, an external Hercules-compatible monochrome or CGA monitor may be connected to the rear panel CRT and monitor power sockets, though you would need to plug an additional EGA/VGA graphics adaptor card into the single internal expansion slot if you wished to connect a high quality colour monitor. Alternatively, this same slot could be used to house a memory expansion board or a modem card. However, a modem is best connected externally to one of the C1's two RS232C serial ports on the back panel, leaving the internal expansion card free for other uses. Rodent fans need not feel left out: Yamaha supply a Microsoft-compatible mouse with the C1, which plugs into one of the serial ports, and a Centronics parallel printer port completes the collection.

The remainder of the recessed back panel is given over to the multi-port MIDI interface and SMPTE timecode connectors (phono). The C1 features two independent MIDI Ins, one Thru, and a grand total of eight independent MIDI Outs capable of separately addressing up to 128 simultaneous MIDI channels (provided your software is flexible enough to cope with that many channels, of course - Yamaha's Sequence is). This makes it the most sophisticated MIDI interface available on any PC. It is 'intelligent', too, like the MPU401, in that it has its own dedicated processor whose task it is to take the considerable burden of handling MIDI data away from the central 80286 processor. The result is rock-steady timing and no data dogging problems - very important if you're working in a professional environment.

A computer is no good to anybody without software, of course, and software is one thing the C1 definitely does not lack. Being a standard AT-compatible computer, the C1 can run any of the vast pool of quality software written for MSDOS-based machines-from desktop publishing programs like Aldus PageMaker and Xerox Ventura Publisher, through powerful spreadsheets and databases like Lotus 1-2-3 and dBase IV, to a whole range of music software - and all else in-between. In fact, when it comes to music, the PC is much better served than the Commodore Amiga, and on a par with the Apple Macintosh in terms of the variety and number of music applications available. The good news is that virtually all US music software houses have adopted the C1, which pretty much guarantees continued support for the product (those people who had their fingers burned by the CX5 need have no worries here). Most PC software hails from America, where it represents a significant slice of the market: 76.8% in 1988, in fact, according to the Software Publishers Association. PCs are so cheap over there (and becoming so over here, thanks to Amstrad) that everybody and their cat seems to own one! No commercial software house is going to ignore such a vast market of potential customers.

That said, Yamaha are not relying on other companies to modify/develop software for the C1 - the machine comes bundled with two very powerful MIDI utility programs, MIDI Monitor and Bulk Manager, plus Yamaha's own MIDI recording software, Sequence. I'll be exploring these three programs in detail next month, but for now let me just say that I believe Sequence to be one of the very best sequencers around. Yamaha seem to have scrutinised other manufacturers' sequencers and incorporated the best parts into their own well integrated program. It combines the best aspects of both mouse-based and command key-driven interfaces, offers real-time and step-time recording across 400 tracks (!), flexible looping and chaining, extensive note and MIDI event editing, automatic detection of and synchronisation to SMPTE/EBU timecode, System Exclusive storage/playback, and considerably more. Indeed, from my brief flirtation with Sequence so far, it seems to offer every feature you might possibly need in a professional sequencing program without sacrificing ease-of-use (full details next month).

To sum up, the C1 is a MIDI power users dream - but power doesn't come cheap. The whole package - computer, mouse, Bulk Manager, MIDI Monitor, MSDOS 3.3 operating system, and Sequence software costs £2999 inc VAT, which ain't exactly small potatoes. Looked at in a different light, however, the C1 appears to be a bargain. Purely in terms of hardware, if you add together the cost of comparable products - a portable AT computer (eg. Toshiba T3100, £1900), Microsoft mouse (£75), an 'intelligent' MIDI interface (£150), a 2 In/8 Out programmable MIDI patchbay (£400), SMPTE sync box (eg. J.L Cooper PPS1 £200), and a powerful 400-track sequencing program (there are no direct equivalents but Voyetra's Sequencer Plus MkIII comes close at £385) - you come to a similar figure of almost £3000. Even if you replace the PC with an Atari 1040ST, mono monitor and external 20Mb hard disk (£1100 total), you're still talking in excess of £2000. But which would you rather have in your studio, a bunch of separate boxes tied together with MIDI cables or one compact 15" square unit that you can sling under your arm and take to a gig, to a studio session, or over to your mate's house? I know which one I'd choose.

The C1 combines all the advantages, and none of the disadvantages, of a dedicated hardware sequencer (robustness, portability, integration) and a software sequencer (flexibility, visual feedback, upgradability) in an elegant, multi-faceted package that I feel sure will appeal to owners of MIDI-based programming suites, studios, composers, and anyone wanting to rationalise their existing MIDI setup.

Next month, a look at the sequencing and utility software that comes with the C1.

Read the next part in this series:
Yamaha C1 (Part 2) 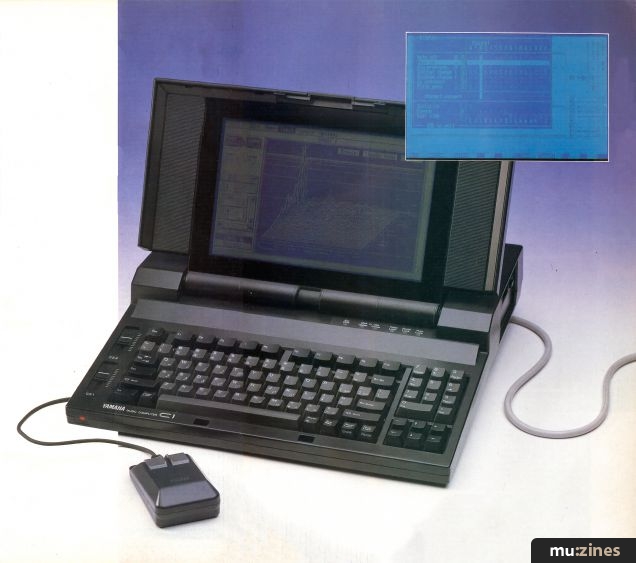 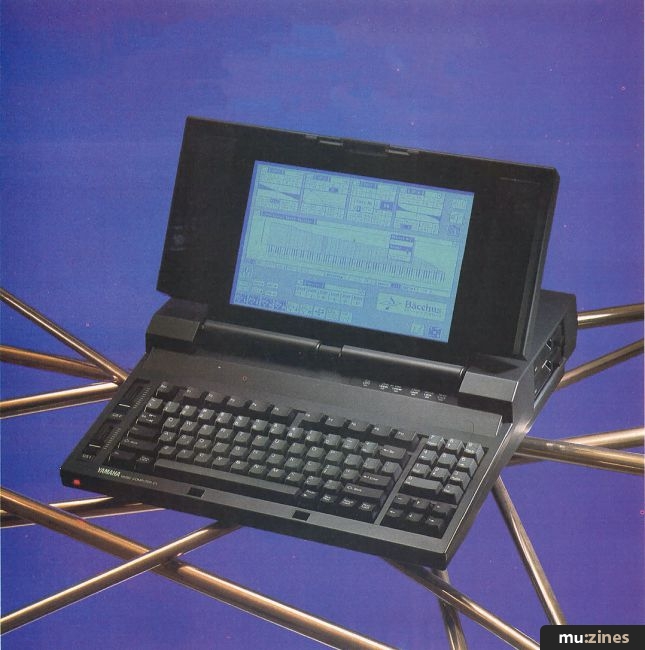 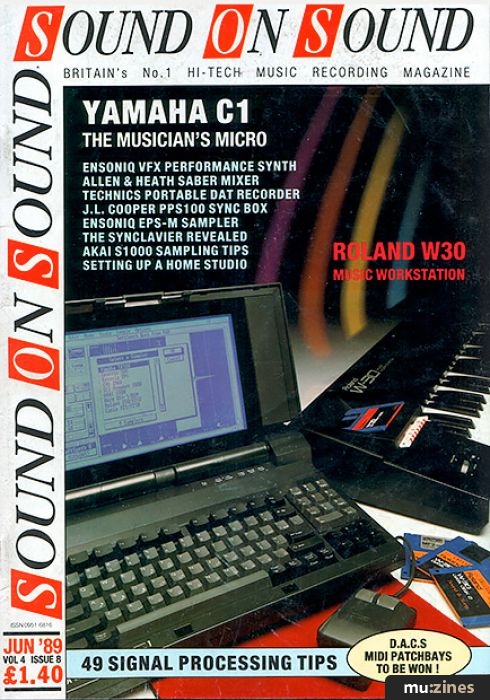 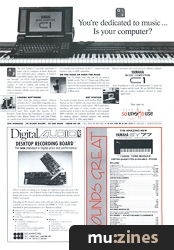 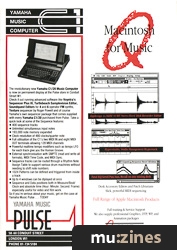