During a recent press trip to the Yamaha headquarters in Japan, we were shown a selection of the new products from the coming 1988 range. Of great interest to most readers will be the long-awaited sampler, the TX16W. This unit is due in the shops around the turn of the year and looks like being serious competition for the Akai S900.

Technically, it is a 16-voice, 12-bit resolution sampler offering three sampling frequencies which start way up at 50kHz (giving 5.2 sec sampling time), drop to the default 33.3kHz for both mono and stereo sampling (7.9 sec) and finish off with a 16.7kHz rate (16.3 sec).

The operating system software is loaded via the integral 3.5" disk drive and from what Yamaha have told us, there will be future software updates for the TX16W which will implement further facilities currently lying dormant inside the machine. The scope and power of what we understand to be a sub-£2000 sampler are pretty impressive with 16-note polyphony, multitimbral capability, 64 individual samples across the keyboard and up to 32 samples assigned to any one voice, extensive sample manipulation, eight individual audio outputs and expandable memory RAM cards (6Mbyte) which fit into the top of the unit.

Yamaha told us that the reason why it has taken so long for their sampler to reach the market is due to a three year development programme, which required a highly sophisticated digital filter to be designed for use in a number of their forthcoming products. On the TX16W this is called a Dynamic Digital Filter, and offers the user a choice of 32 filters which can be stored in 16 filter tables. 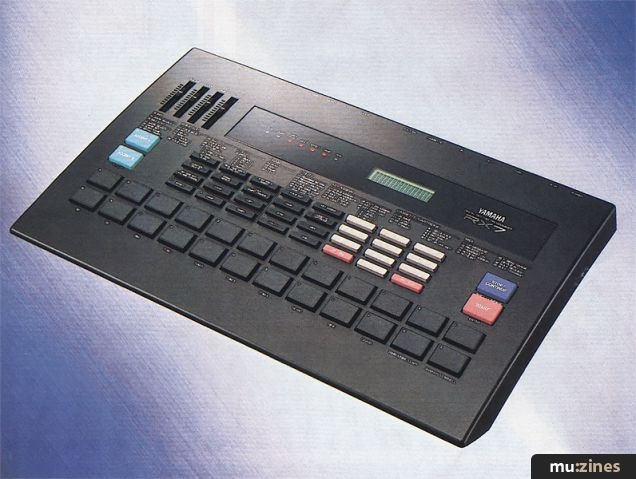 The RX7 will arrive next year and has been designed as a mid-priced drum machine, sitting somewhere between the RX5 and the smaller RX17. It offers many of the flexible features of its bigger brother, the RX5, though it lacks individual audio outputs and individual fader control of the drum sounds. However, you do get 100 sampled sounds ranging from drums, percussion, vocals, guitar, bass and brass. All are fully polyphonic and you can allocate any sound to one of 15 positions across the stereo field and introduce MIDI delay/repeat to produce echo effects. The price is likely to be between £500 and £600.

Unveiled at the recent New York AES show was the Yamaha DEQ7, a 1U rack-mounted stereo equaliser which offers very powerful tonal manipulation. It features balanced line audio input and outputs as well as direct digital bus access for connection to the current Yamaha DMP7 digital mixer and all future products.

The basic unit includes 30 preset equaliser configurations covering almost every form of EQ setting and offers such formats as 1, ½, 1/3 and 2/3 octave graphic EQ with 18dB cut/boost. There's also 4-band parametric, bandpass and rejection curves, dynamic EQ for producing filter sweep effects either by footpedal control or via MIDI, and a notch filter with 6 programmable notches.

Once you have selected the filter type you want to use and modified it to suit your needs, you can store the setting in one of 60 RAM locations for instant recall via MIDI program change numbers. Both left and right channels are independently programmable and feature an integral delay giving 738 msec maximum delay time. This feature is useful for phase and delay correction in multi-speaker set-ups. Price approximately £700 to £800.

Ideal for studio use will be the new TX1P piano tone module, which gives you five distinct piano sounds in a 1U rack. Each sound is a high quality sample of the original instrument and features grand piano, upright piano, electric piano, harpsichord and vibes. The TX1P is 16-note polyphonic, velocity sensitive and features three built-in effects. These are: chorus; transpose delay, which allows you to add single or multiple repeats to each note; and chord play, which lets you assign a chord to a specific note on the keyboard.

A new synthesizer, the DX11 (8 algorithm, 4 operator), will have its UK release sometime after March 1988. Known as the V2 in Japan, it is packed with many new and powerful features currently not seen on any of the Yamaha DX range. For example, it will be the first Yamaha keyboard to be 8-voice multitimbral and it includes their new 'quick edit' function, which allows you to edit FM sounds in response to the more traditional synth terminology, ie. envelope attack, filter cut-off etc. There is no need to learn the digital approach with algorithms and operators, though you can access them as well. Other features are similar to the TX81Z and include delay, pan and chord set, plus alternate mode. This allows you to assign different sounds to the same note on the keyboard and alternate between them as you play. Price below £1000.

Further new products will be covered next month, but we will round off with brief news of some distant developments Yamaha told us about. Coming sometime in 1988 are the RX120 preset rhythm machine, a MIDI-to-light controller, MIDI guitars and basses, more mixers in the DMP range, possibly another sampler and we might just see a DAT-based digital multitrack for home recording, though this may not quite make 1988. [Let's hope it does! - Ed]

Previewed at the New York AES was the new E-660 digital parametric equaliser from Roland. This is a 2U rack-mounting stereo unit for professional use which features programmable frequency, Q and level across four bands. The incoming sound is sampled at 48kHz or 44.1 kHz with 16-bit resolution giving a 90dB dynamic range. In addition to EQ, the E-660 can produce a number of related effects as it contains a delay function which may control each of the four parametric bands to produce time and phase-shift effects.

99 user programs may be stored internally for instant recall via MIDI control and the back panel includes a digital I/O port for direct digital connection to future equipment.

Also shown at AES was the professionally-oriented R-880 digital reverb. This is a 2-in, 4-out unit. It features high quality 16-bit resolution reverb, includes a comprehensive remote control which can control up to 16 R-880 units simultaneously, and longterm storage of parameter settings is via RAM cards. Further information is not available at present but we will have more details next month.

We have been informed that Ensoniq, pioneers of low-cost sampling, are working on two new keyboards for release very soon. A new sampler, the EPS (Ensoniq Performance Sampler), which looks like being the big brother of the current Mirage DSK and features 20 dynamically assigned voices, eight separate voice outputs, an onboard 80,000 note sequencer, and selectable sampling rates up to 52.1kHz (4.95 sec sample time). It uses 13-bit A/D conversion and is disk compatible with the existing DSK.

The other new product we have heard about is the Ensoniq SQ-80, which is like a turbocharged ESQ-1 with considerably more features such as polyphonic aftertouch and a built-in disk drive. Sounds are constructed using a variety of internal sources including 75 different samples as well as traditional synthesizer waveforms. Like the new EPS, it includes a built-in multitimbral sequencer. 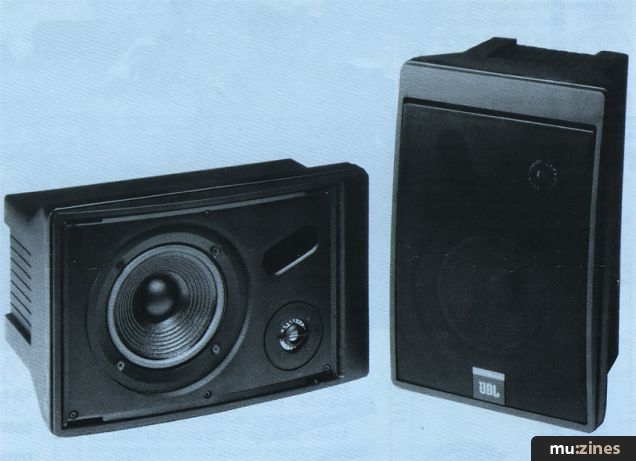 Just launched by JBL is the latest edition to the Control family, the Control Five monitors. Physically larger than the existing Control One, the new monitors will handle a phenomenal 175 watts and offer a 75Hz to 20kHz frequency response. Construction follows the same polypropylene moulding found on the Control One and a varied range of mounting brackets are also available to suit most applications.

Unveiled at the AES was the first 'low-cost' digital multitrack recorder from Akai. The DR-1200 is a 12-track rack-mounted recorder which uses a customised Sony Video 8 tape format. A maximum of three units may be chained together to produce a 36-track digital recorder. Akai announced that they foresee the DR-1200 revolutionising the traditional recording studio as we know it. Although the unit is deemed low- cost, we don't think you should start selling your B16 as this is, of course, in relation to current alternatives on the market, such as the Sony and Mitsubishi digital recorders. Rumours seem to indicate a figure around £25,000.

A Day in the Life of a MIDI Studio