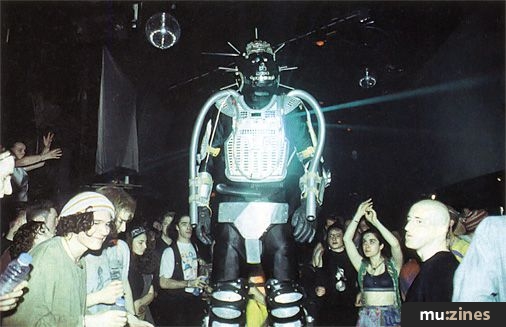 This strange creature was spotted deep in the shady underworld of London's alternative clubs, where dancers and aliens meet on a regular interplanetary basis. On this particular occasion, Megatripolis, one of the most successful of the new breed of late-night cosmic cafés, was mounting a very special megatrip: a night-return to the moon, plus travelcard and car park.

To those in the smoking compartments, the journey was suspiciously one way. But since we are talking a virtual trip to the moon, with carefully programmed video projections surrounding the dancefloor on 10 hanging screens, nobody was really left stranded anywhere they didn't want to be. As an exercise in imaginative, trance-inducing multi-sensory entertainment, Ignition (as it was called) was perfect.

Director Peter Mosse, known to all as Bugsy, is keen to uphold the edifying properties of the experience, too.

"I have a concept of edutainment," he says. "It teaches people as well as entertaining them." In an orchestrated marriage of video, sound effects and music, the entire room becomes a capsule of environmental awareness. Indeed, elsewhere in the club, lecturing and poetry rooted in pre-hippy beat radicalism stretch a great many points still further. Clearly, this is no skull-draining rave.

"It's an experiment in communication," continues Bugsy. "The idea is for a 'time machine' which takes people backwards and forwards in time, using current technology - but it needs more finance. We're developing ideas for that through Megatripolis at the moment."

With more ingenuity than technology, Bugsy and his team have identified multimedia techniques as a potent new way of disseminating ideas. By combining sumptuous footage of exotic wildlife and elemental landscapes with a thumping good soundtrack, lifting and balancing the mood of the dancefloor with responsive DJing, Megatripolis is playing a new generation at its own computer game.

Viewing all this cynically, you could say the same methods may be used to sell washing powder. But Bugsy would be happy to use his techniques in the service of corporate interest if it meant he could invest more back into Megatripolis.

"The technology exists right now to do exactly what I want to do, mostly in optical disk systems and computer-controlled projection systems. We need a back-projection system so that the entire walls can be part of the experience, right down to your feet. But in the meantime we have to adopt a DIY approach to do what we can."

This involves raised screens, suspended projectors and a relatively low-tech gallery of audio-visual controls. Each operator - video, lighting, DJ, sound effects - works in isolation, and there is no centralised program running the whole show via timecode. Hence the need for meticulous scripting and choreography. Most importantly, the will - and the skill - is there to create an integrated atmosphere.

"Atmosphere creation," Bugsy asserts, "is to do with human psychology more than anything else. With video projections, you can change the backdrop at will. We can put a starscape all around people, and you'll have an atmosphere of being in space in that room. Also, obviously, you can run sequences, but simply spinning fractals is a little unsophisticated. It can be great for up-tempo dance music, but if you take film and other footage and use it carefully and subtly - and just more slowly - the atmosphere you create is a lot more powerful.

"Atmosphere creation is to do with human psychology"

"We've taken people on a trip to the moon and back, but the slower sequences within the program really had an effect - especially the underwater sequences and the starscapes. As soon as you put the right sounds, the right music, and the right smells on top of that, you start to create a whole ambience."

You know the old joke about the club on the moon with no atmosphere? It ain't Megatripolis.

Megatripolis happens at the Heaven night club, under the arches of London's Charing Cross station, every Thursday.

The visual material was played on four SVHS VCRs and two Panasonic VHS machines, and projected onto the screens by six LCDs, two Barco 600s, one Barco 400 and a Sony 900.

Inside Megatripolis, you can log onto an international computer network and hold a global tea party. In fact, it's called the Virtualitea Room. Alongside the interest in multimedia technology, the club provides ample proof of a faith in free information exchange over the nets - and in how this can be a social, rather than a solitary, pastime.

"What we want to do is global networking," says Bugsy. "We've made great contacts with people like Biosphere in America, and recently we had a satellite link-up with the writer Arthur C Clarke in Sri Lanka. Other people may be spending hundred of thousands of pounds doing it, but we're doing it at grass-roots level. We want to show that we can network across the world with political and religious leaders from an entertainment base. We can have a networking, political vibe as well as dance music and people having fun. It's that mixture of ideas that Megatripolis is all about."