we get the U.K.'s first sample of the Black Magic Box

Boston's guitar player, Tom Scholz is a man with a mission in life, it seems. Not only has he already fronted a band which went from nowhere to the top of the U.S. charts, but he also heads his own company — Scholtz Research and Development — which seems to be dedicated to enabling guitar players to get true rock guitar sounds — often in the oddest ways.

The first piece of equipment from Scholz' R&D organisation which we tried was the Powersoak (reviewed in issue 10). That unit couples to the output section of your amp, is then linked to your speakers and acts as a 'soak-up' device, winding output power from the amp and dissipating it as heat through a series of resistors before allowing a controlled portion of it through to produce the sound. The idea is that the guitarist who wants a real rock guitar sound knows full well that he will only ever reach an approximation of it by using master volume systems, which do not overdrive the output devices of his amp in the same way as full flat-out use. Hence the Rockman enables you to use your amp to the full — but at volume levels which won't blow your windows out!

But even while we were reviewing the Powersoak, word was spreading across the Atlantic that an even more innovative device was to follow — a unit which has already threatened to become in the States the sort of phenomenon that, say, Boogie amps are or Pignose combos once were — this device was called the Rockman, and we've just scored the first sample of it to hit these shores.

Measuring just a bare 6¼"x4¼"x1½" (approx), the Rockman is fitted with a metal spring-clip so that it can be fitted to the user's belt. It's powered from eight AA size batteries which fit into the base and the unit offers a simple array of controls on its top surface. These comprise a standard size jack socket (which will take output levels from either guitars or keyboards), an auxiliary standard sized jack (for connecting stereo systems through the Rockman), two mini-jack sockets for headphones (one pair of which is supplied with the unit), and a series of small sliders which control the sound and effects.

The first of these (the one at the top left) is marked 'norm', 'echo off' and 'chorus off'. Below that is another, this time marked to show four basic settings, 'clean 1', 'clean 2', 'edge' and 'distortion'. On the right hand side of the panel live another two sliders, these control volume of output (marked as three settings, -10dB, -5dB and maximum) and a simple on/off switch.

Plug your guitar or keyboard into the Rockman, switch the unit on and a tiny red LED blinks to show you that the Rockman is connected and working. This is useful as battery life is only around 35 hours and it would be a pity to waste them by leaving the amp switched on in error. After you've done that it's time to set the output volume levels — here's where the first shock hits you. The Rockman isn't loud — not at all, in fact, but from the moment you put those lightweight cans on and play a note or a chord the most astonishingly convincing fully powered guitar floods right into your brain — in full living stereo too!

"DISTORTION IS FANTASTIC - SORRY, THERE'S NO OTHER WORD FOR IT!"

Now it's time to begin playing around with the controls. Set at 'normal' the Rockman's sound is actually not a pure feed at all, but rather contains just a fairly subtle chorus effect and a small amount of echo: 'why?' is a question we'll answer later.

To tune-up without interference from the chorus swirl you set the chorus effect to off and just have the echo on — tuning is easy, the sound quality is astonishingly good. Next off you have to set the sort of sound you want. 'Clean 2' is perhaps the jazzier of the two clean settings, fuller than setting 1 it is still a very fine sound — superb for chords when that chorus is switched back in. Clean setting 1 itself is, again, a fine sound — just a shade harder and, we found, especially nice with our test guitar (a Fender Jag fitted with Seymour Duncan pickups — well breathed on by the great Mr. Peter Cook!). Next off, flick the switch over to 'edge'. Here a rasp's added to the sound, great for chords and the less mega-death orientated solos, but still sharp and alive and curiously endowed with a sound which is so amazingly 'big amp' that we took a long while to even begin to figure out how Scholz had done it. Distortion is fantastic — sorry, there's just no other word for it! With the echo effect and the chorus blending in, you have the sort of lead guitar sound which you'd normally hear on a big stage — it's far more convincing, say, than eyen good practice amp turned-up loud — and we think we know the reason why.

What Scholz' team have realised is that no normal tiny amp working at low volumes (however much distortion you put into the signal) will ever sound like a stage amp on full. Missing in such systems are the natural reverb effects you get from the room, the sense of space and breadth in the sound — which is why, we believe, you are automatically provided with both reverb/echo and chorus effects as in-built sounds — what they do is work to make the sound fuller and more naturally ambient, rather than give definite repeats and the more excessive kind of pedal effect chorus.

"...THE ROCKMAN HAS A SOUND TO IT WHICH DEFIES EVEN THE BEST PRACTICE AMPS TO APPROACH..."

But personal listening isn't all you can do with the Rockman. The unit can be wired to play through your stereo system, you can jam with another musician (each using the second headphone outputs from your Rockman units), you can plug it straight into a conventional 2 track cassette or reel to reel recorder, through a mixing desk and even the other way round; you can run your stereo into the Rockman and play along with records or tapes in silent ecstasy!

We are fully aware that the price of this unit may seem, on the face of it, fairly high — but the Rockman has a sound to it which defies even the best practice amps to approach and once you've heard one for yourselves we're pretty sure you'll see why the first shipment to reach the U.K. sold-out through various retailers in a matter of days. Somehow the Rockman's internal circuitry even seems to feature a first-rate non-variable compressor which enables sustain to be got quite in defiance of the normal need for full volume.

Undoubtedly Tom Scholz has hit the nail firmly on the head with this product and, notwithstanding the apparently pretty high price we would urge anyone out there who fancies the idea of one of these units to get to try one as soon as they can.

Supplies, as we say, are limited, so it would possibly be well worth contacting the importer direct who'll be able to advise you of a local stockist. The contact is Dixie Kidd of Dixies Music in Huddersfield, Telephone number is (Contact Details). 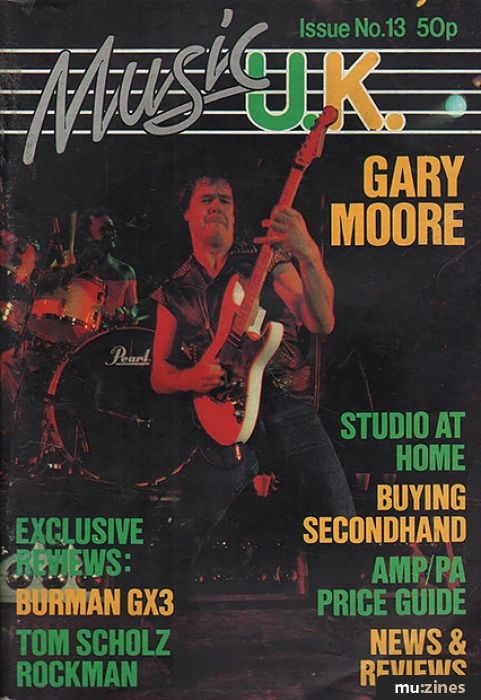 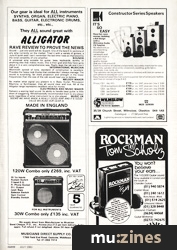 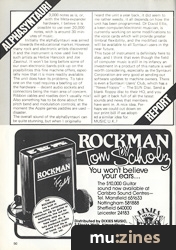