The first in a regular series in which we focus on musicians and their personal workspaces. This month, Paul Ireson finds himself at home with up-and-coming ambienteers Red Sun. 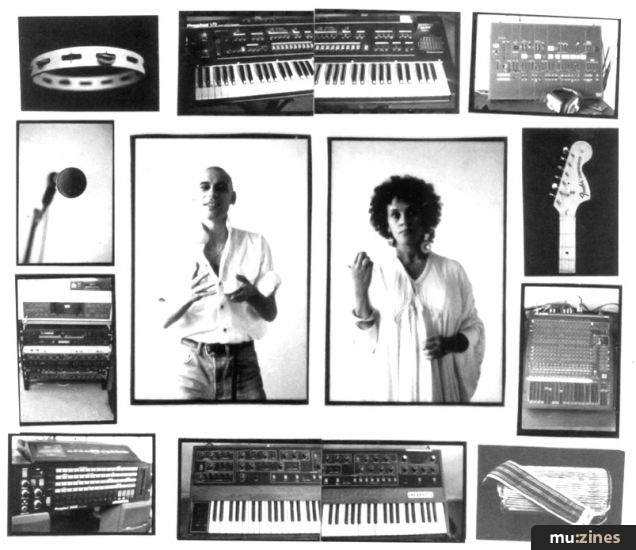 Following several months on pre-release, during which it has attracted glowing reviews and a good deal of attention, Red Sun's self-titled debut album gets its full UK release this month on Harmony Records (CHARM003). This is ambient music for those who never knew they liked the stuff, new age music for anyone who hates New Age — emotive instrumentals, totally without pretension, breathtakingly beautiful, and quite timeless. It is also music for the flipside of club culture, popular in the chill out rooms of clubs such as London's Ministry Of Sound, The Brain, and Zatopeks.

Niki Patriarchaea and Yale Del Fabbro have put all their time and effort into Red Sun, and they've certainly got results, both in the quality of their work and the response it has elicited. A video for the track 'Honey From The Baka', shot on the tightest of budgets, has already been shown several times on MTV Europe. "They say that most cheap videos cost £15,000 or so. I will say that ours was at least 10 times cheaper than that," says Niki. "It wasn't so much a budget as what our director called a 'why can't we have a' budget. But it was shown on MTV; what can you say."

The album was written over an intense two-and-a-half month writing period, in Niki and Yale's flat in Tottenham where we're now sitting talking about the end result; recording and mixing was at Berwick Street. "We wrote 30 pieces for the album, and chose the 10 on the album to fit together and flow. Because we have this space — we organised our lives to give ourselves the financial space and every other kind of space to just be able to do music — we can think, 'what are we doing today? Ah, we're writing music'." Yale agrees that this is crucial in the creative process. "It's totally different to when you can only get a few hours writing at the weekend," she says. "You can't write properly like that."

"We didn't know quite how it would turn out," reflects Niki. "Our modus operandi was to write exactly what we wanted to write, no commercial considerations. Funnily enough, it's turned out to be, of everything I've done, by far the thing that has appealed to most people. Is there a clue there? I don't know."

"This is our writing room," he explains, showing me round a front room in the flat; a couple of keyboards, Alesis 1662 mixer, no multitrack. "We've got a Prophet VS each, although there's only one in here at the moment. The way we tend to record is on the C-Lab, highest resolution, no click track, no quantisation, no nothing." This idiosyncratic approach to a powerful MIDI sequencer is not the result of ignorance or a Luddite attitude — on the contrary, when Niki ran a commercial studio, he was quite a pioneer in making extensive use of then-novel MIDI technology — but more a result of using the tools of technology in a way that suits the pair's creative needs. The emphasis is on writing good, solid music, and then capturing a good performance in Creator. "When we're writing, we both sit down and play — and it either works or it doesn't. You know, if it's not working, I'm going out for a walk. We don't say 'that's half right' — we don't put this bit there and so-on." "It's instinct and feel," agrees Yale.

"Our recording method is very MIDI un-intensive," continues Niki. "I mean, the first track on the album, with the 'puffers' in the background, and lead piano, is just two tracks on C-Lab, and that's it. Editing? As far as MIDI edits go, there were, I think, two bum notes or flams that we took out. If something was wrong, we'd just take it again. Most of the piano takes were just one take."

Rather than leave the sequencer recording all the time, to catch any ideas that might come up, the stages of writing and recording ideas are firmly separated. "I used to use that method of recording all the time, but I ended up with what I call lots of little puddings, which were fine in themselves, but unless you're going to work and develop the ideas... but we're not into that 'work and develop' attitude. If we do a track and it's not right, it's not going on the album. And tomorrow let's do another. Make it right one time. I think that's why some of the pieces have connected with people — it's because they've connected with us."

Yale insists that ideas are never lost, just temporarily submerged in a pool of ideas: "That's also the wonderful thing about free playing. There was a time when you would have said 'I wish I'd recorded that', but you get over it because what happens is that if you play for two or three hours and you come up with some fantastic stuff, it always comes back. It might be a year later, or next week, or when you're looking for a certain feel for something and it comes back. Once you have that confidence, you can relax more, enjoy playing for playing's sake, and knowing that when the time comes, the bits of magic will come."

Red Sun's outboard rack contains a Lexicon PCM70, PCM60, two SPX90s, Drawmer gate and compressor, an Axxeman for the guitar, and a DBX compressor. The mixer is an Alesis 1662. "I've got to say, it's bloody amazing," enthuses Niki. "The faders feel absolutely disgusting, but the fades are the best fades I've heard in my entire life, they really are. If you fade something out on those faders, and fade it smooth, when you listen back to it at high volume the taper on it goes all the way down."

Sampling duties are shared by an Akai S1000 and a Prophet 2002. "We got a Proteus 2 in for the album, but there were only a couple of sounds that I felt had the sparkle; something kept letting me down. Although the sounds were good, whenever I brought the S1000 in, there was something much more satisfying about it — in the end I think it's just the sample rate." The 2002, despite its age, also comes in for praise: "There's just something about it — take an 808 sample, for example. Even though it's not as sharp, because it's only 12-bit, it's more like the feel of an 808."

Having written the album tracks and prepared sequences at home, Niki and Yale worked at Berwick Street to record and mix, adding live guitar in the studio. "We brought Andy Falconer [The Orb] in because we weren't happy with the first attempt at mixing, and finished it with him in two days."

I was surprised to find that all the piano on the album was not, as I had assumed, live, but in fact a rather good Prophet 2002 sample. "That's it. It's 2002 recorded on C-Lab at 1536ppqn, no quantisation, no nothing. I have not found a piano sound on the S1000 that I can get on with. The sound on the 2002 was given to a friend at a show by Dave Smith [Mr. Sequential Circuits]."

Dave Smith designs feature prominently in the Red Sun equipment line-up — besides the two VSs and the 2002, there's also a Prophet 5, rev2.2, MIDI'd by Ronnie Le Barre. The VS is praised for both the feel of its keyboard and its sound. "Almost every track on the album has a touch of VS," says Niki. "Almost anything that's floating in the background tends to be VS; the rest of it is all S1000 and 2002. Chordal things tend to be S1000. On the first track the 'puffers', as I call them, are S1000. On 'Honey From The Baka' the picking is guitar harmonic samples, the voices are the VS, and the piano is the 2002. The S1000 is not really used for upfront sounds; that's all VS and 2002, and a little Prophet 5 thrown in where appropriate.

"I would like to use more Prophet 5, more ARP. But when we did the album I suppose we thought 'and then we'll do the overdubs', but ended up not doing any."

Keyboard duties are shared roughly 50/50 between Niki and Yale, and Niki plays guitar. "Yale does all the percussion. We both do lead piano, Yale a little bit more than me. I tend to do the chordal backing, and the little voices or something."

Perhaps the two most striking things about the instrumentation of the tracks is the minimal use of percussion, and refreshingly sparse arrangements; almost every track uses no more than three instruments. "One of the biggest challenges was to do this without drums," says Niki, "so we had to find something that fills the role of the drums — other instruments do that. It was a conscious decision, because we'd just heard too many drums. By the time the Roland R8 came out, it was like, 'you wanna good drum sound? pow!!' All the drum samples are TR808, on the 2002, or CR78 on the S1000. With all the thousands of drum sounds, those are the ones that I knew would work."

He agrees with my suggestion that it's because, not being very accurate imitations of real drums, their sounds have more character and are therefore actually better 'instruments' than most drum machines.

The sparse arrangements are in part a hangover from Niki's engineering days — "I learnt then that the less there is on a track, the better the track sounds. The first track is two instruments, and the second track has percussion, a chordal thing, and treated piano. Third track is 'pickers' and sax. The fourth is two harps playing together in a live improvised duet. The fifth track is percussion, chords and lead guitar. Sixth track is 'pickers', little voices, and lead piano. Seventh track is percussion, chords, bass, and lead guitar — four tracks, the most we used..."

However, this simplicity was not the result of a hard and fast rule. "I wouldn't say that it's a policy of ours not to have more than three instruments," says Yale. "It did surprise us when we got to the point of saying, 'OK it's time do overdubs, give it a listen to see what it needs', that the music just said 'I don't need anything'." As is so often the case, less is more. 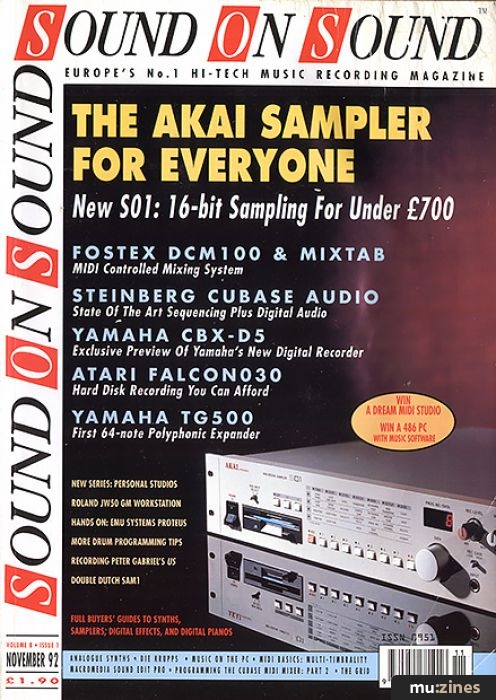