The portastudio that would be Nassau

There's no doubt that compact cassette multitrack recording has been one of the most revolutionary developments in the world of music making. The principle of compactness and portability has been taken to extremes by Tascam and Fostex with their market leading PortaOne and X15 models. But now manufacturers seem to be interested in a different principle, namely, trying to create a recording system still based around compact cassette, but which offers features and quality comparable with a modest professional recording studio.

Earlier this year I looked at the Tascam 246, possibly the first venture in this direction, and now on its heels comes the AT-RMX64 from Audio Technica. According to the brochure, the AT-RMX64 was designed with the intention that no compromises in the performance of the unit would be made, hence presumably its rather staggering price tag of well over the grand mark. It's a long way from an X15 isn't it?

The name RMX64 translated from 'brand-speak' means Recorder, with a 6/4 mixer. It has, like the Tascam 246, six input channels, but in addition it has four more sub channels, usable for a variety of functions such as monitoring, mix down etc. These are therefore the most obvious distinguishing features of the machine, but they are only the beginning, since the RMX64 is positively weighed down with features that you wouldn't find on any other portastudios.

When I say that the RMX64 is weighed down with extras I do mean it literally. In the sense that you can pick it up and carry it from location to location it is portable, but you certainly can't walk around with it swinging from your shoulder. It is a bulky machine with a durable metal chassis, weighing some 22 kilos with the rough dimensions of a medium sized suitcase.

The general layout of knobs and buttons is good – no fiddly, cramped sections to snare the fingers. However, the illusion of ruggedness was soon dispelled upon inspection of the record level pots which wobbled backwards and forwards altogether exactly the way they shouldn't in a unit of this price. The touch-type controls for the recorder were similarly suspect, not only lacking considerable sensitivity, but also tending to sink below the face panel when being persuaded to respond.

The first four input channels consist of trim control, input selector switch, two sends with two level pots, eq section, four sub assign selector buttons, solo selector button and a master fader. The input selector has three positions, one for normal line inputs, one with a -20dB pad for higher gain inputs, and one for selecting the relative track from the multitrack. This flexibility is symptomatic of the general flexibility Audio-Technica have aimed for in designing this machine, allowing distortion-free inputs from 0-40dB.

The eq section likewise offers extra flexibility, allowing a choice between parametric (sweeping) equalisation of high and low ranges, and of shelving-roll-off type equalisation, where levels can be cut out below a certain adjustable frequency.

The remaining two input channels (five and six) are identical except that the input selector, instead of selecting a track from tape, inputs one of two auxiliary channels designed for use with an audio source such as a stereo tape or record player.

There are two send return channels, switchable either pre or post fade with master gain and pan controls on each in duo-centric pots. The signal can then be routed to any sub-channel with the same system of assign buttons as used on the main channels, and each channel has a solo monitoring selector button.

The four sub-channels consist of a fader and a solo monitoring button. Situated above the tape recorder are four record selector buttons, and four record level controls, each with an LED to indicate when in record ready mode. Across the top of the mixer on an angled back panel are four VU meters, each switchable to monitor record levels or sub-mixer levels, and a single stacked-type meter for monitoring solo levels. Finally there is facility for use of four pairs of headphones, which can monitor either the solo monitoring signals, or a stereo mix of tracks already recorded.

The recorder functions at 3¾ips when in 4-track recording mode, or at 1⅞ips when in 2-track mode. (Incidentally, the manufacturers state that recordings done in this mode are fully compatible with normal cassette players. They also state that recordings done in this mode are done '½-track', which they are not since a ½-track recording is not compatible with normal cassette recorders.) The controls are touch type and include a Zero Return Memory function. Here, the RMX definitely falls behind the Tascam 246 since that machine not only has this feature, but can also be set to play a section over and over again in order to rehearse overdubs – the kind of function so useful and aggrosaving it almost makes you love the machine. The recorder is three motor, direct driven, can select either Dolby B orC noise reduction, and has ±15% pitch control.

And as if this wasn't enough, Audio Technics have attempted to complete the RMX's professional-type appeal by offering an enormously wide range of connection types for the various inputs and outputs. Here, in a sense, they take their first serious risk, because since there are so many inputs they have put the connections along the back of the machine – a departure from the traditional formula of the Tascams and Fostex's. Whilst all this makes for a lot of flexibility and avoids many of the perennial connection problems, this does prove a limitation to the machine's general flexibility. It means that unless you actually install it (ie, you have the various lines permanently patched) you spend a lot of time fumbling around the back looking for the right hole. Now this may be fun with your girl/boyfriend, but it's a pain in the arse if you're trying to get a song down quickly.

This machine is definitely a quantum jump from even the Tascam 246, but from my point of view at least I'm not particularly sure whether it's a jump in the right direction.

Basically, recording tracks and bouncing tracks down is all fairly straightforward. Boons here include not having to worry about the pan control when assigning an input channel to the recorder, and not having to compromise your monitoring by virtue of the solo buttons – it should be possible to monitor from speakers or headphones no matter what combination of playback and input patches you have. The system is less prone, therefore, to the situation often arrived at with Fostex and Tascam machines where you not only record the instrument you are playing, but also the other dubs so far recorded onto the same track because you have forgotten to switch back from playback to record monitoring.

The numerous Solo buttons do pose a problem in themselves. Monitoring in stereo for playback is possible through a headphone selector switch, and the combination of this with the various solo buttons for each channel and the assign one and two buttons needed to route the signal for stereo monitoring can be very confusing indeed. I'm not saying that they are illogical, or hard to understand by any means, it's just that there is a certain tempo of working which I normally associate with using a portastudio, and unfortunately you have to go a bit slower when using the RMX64.

The abundance of available inputs, outputs, sends and returns certainly adds considerably to the options available in signal processing, allowing a possible (but unlikely) five separate units to process the signal even if there is only one free track left on the recorder. Against that there is, however, the possibility feeding the track back on itself.

Bouncing down is very simple – more so than on most portastudios – each channel being simply and easily routed via the assign buttons. The biggest problem I found when recording was monitoring the signal levels. Not only is the metering confusing, needing a lot of care in selecting whether the meters respond to the sub channels or the tape recording level, but also there seems to be very little gain on the record level pots so that you frequently have to re-adjust the trim control to get enough signal through. Quite why this is I can't work out from the circuit diagrams, and furthermore the channel faders inexplicably seem to have no effect either.

The only thing that the RMX64 shares with the majority of other portastudios is its use of a cassette format multitrack. In most other aspects it is completely different.

The high cost of this machine should testify to the quality of its components, and indeed it uses computer standard components in its circuitry. Temporary connections cannot quickly be plugged in and out, but instead thought has to be given to patching the various inputs, etc. All of this points, as far as I can see, to some very specific uses for this system, the most likely being as a basis for a four track recording studio, where things won't be moved around much, and where patched systems can be ready set up. I'm less sure about its utility as a songwriter's tool since in this situation you need a machine that is user-friendly and quick to use.

AGAINST: Price; outputs on back panel; complexity

The AT-RMX64 seems to fall into a vacuum between cassette and installation recording whilst not providing any obvious advantages over either type of availability system. Nevertheless, it is a flexible and highly specified machine that does solve many home recording problems. Whether you want to pay a grand to do this is another question. 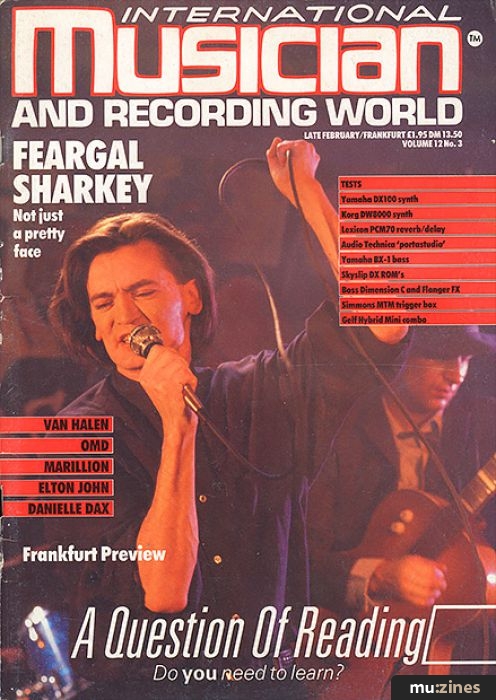 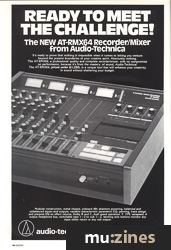