Dave Burrluck on the progress of a British labour of love 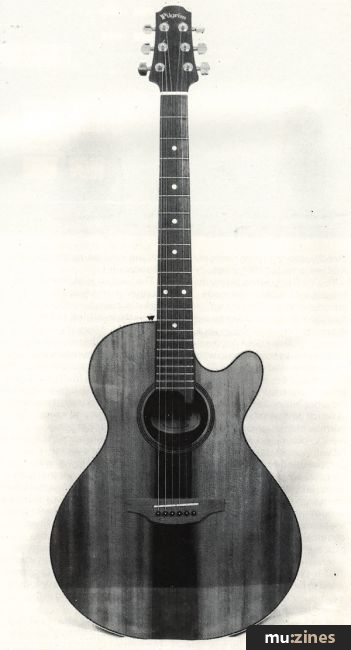 The present Pilgrim guitar is something of a labour of love for the company's main man Paul Tebbitt. It has taken quite a few years to develop it to its present high standard from an idea an independent guitar maker had who brought in a fairly crude version of the instrument for Paul's perusal. The Pilgrim company, based in Leicester, now consists of seven employees turning out around 40 instruments a month, which is quite a high number for such a relatively small operation.

But the Pilgrim's just another Ovation copy, innit? Well, first impressions do give that idea but when we consider that the cutaway shape goes back some 10 years we can see that the company's aim has always been to innovate as opposed to imitate. The round-back design is, of course, the obvious parallel to the Ovation but it is included here to reduce the price of the instrument — with a standard construction the Pilgrim would probably retail nearer £700.

Above all, while the company has been set up to handle a good size production, the 'hand attention' that each instrument receives is clearly obvious from the outset.

The round back at its deepest point measures approximately 140mm and curves steeply away to the sides, which actually come to an edge in the middle bouts allowing the instrument to rest comfortably on your leg while playing. The cutaway adds further sculpturing to the back, making the term 'round back' slightly inaccurate.

Glass fibre is used for the construction of the 'bowl' and is hand-laid into a former. The resin used in the construction is unique to Pilgrim and the bowl features a very smart vinyl black 'splatter' lacquer. The careful hand attention that the bowl receives during construction allows different thicknesses to be obtained which have been carefully developed over the years to ensure — in theory — that the tone of the guitar has a 'wooden' as opposed to synthetic character.

In keeping with the company's design concept the rest of the guitar is very traditional. An American Cedar top is used here with a very close and even grain. The two piece book-matched construction gives a perfect 'mirroring' of the light and dark brown stripes of the timber. The internal front bracing is based on the standard 'X' design but typically has been 'Pilgrim-ised' to tailor it to the hybrid construction. The bracing, made from Spruce, plays a dual role on any acoustic — strength, and vibration distribution which obviously affects the tone of the instrument greatly. Peering in through the sound hole the visible bracing is cleanly finished and smooth to the touch.

The body is bound with a single cream acrylic binding with a decorative purfling on the inside edge. Likewise the sound hole has the same purfling but it is expanded with a couple of black/white rings on the inside and outer edges. The choice of this purfling is perfect for the guitar — subtly striking.

So many acoustics are let down by the neck shaping and general playability, but happily this is one of the Pilgrim's strong points. The neck itself is made from a Mahogany/Maple/mahogany laminate — the matched slab grain of the mahogany contrasting the quartered centre-piece of maple. An adjustable truss-rod is fitted which is accessed easily through the sound hole thereby strengthening the nut area of the neck by its absence. The tasteful symmetrical headstock features a rosewood veneer and the screen painted gold Pilgrim logo.

At 638mm the scale length is approx 10mm shorter overall than a standard Fender scale and the Rosewood fingerboard features a full 22 frets. The neck joins the body at the 14th fret but the cutaway does allow good access to the upper frets, although obviously not as good as a solid body electric. The 22nd fret coincides with the position of the sound hole although there is a little 'ear-lobe' type shape protruding from the bottom of the fingerboard on the treble side, primarily for aesthetics. Decoration of the board is kept to a minimum with bold mother of pearl dot markers on the face and corresponding white dots on the edge. The low profile, 2mm wide frets are extremely well fitted and highly polished, contributing greatly to the playability of the instrument. It really is good to see so much attention lavished on such an important part of the guitar.

A satin lacquer has been chosen for the neck finish which probably won't be to every one's taste but does look and feel very good. The front of the guitar has a more typical high gloss plastic finish — on this sample it's clear — which allows a small amount of expansion to stop cracking in extremes of temperature, plus giving the instruments very durable protection from the odd knock or two.

Pilgrim are adamant that their choice of Gotoh machine heads do the instrument proud in terms of quality versus price. There is still a snob value attached to Schaller heads but these units not only work perfectly well but also contribute to the comparatively low retail price.

The bridge fitted here is made from Walnut and is simple but functional in design. Six black plastic bridge pins hold the strings in place over an acrylic two piece saddle. Unlike many saddles this one isn't shaped for fine intonation but left gently rounded. Of course the bridge hides the pickup — in this case a Marcus Berry transducer which requires no pre-amp and therefore no internal batteries. This type of pickup has suited Pilgrim for many years now and the secret to it lies in the correct fitting. The output jack — standard ¼" — lies on the underside of the bowl and completes the simple pickup system. There are no on-board controls fitted which apparently is causing Pilgrim a bit of a problem. In the early days of production on-board controls were fitted, but opinions deemed that a volume and tone were rather unnecessary and ruined the look of the instrument. However, now that Pilgrim have a wider 'audience', so to speak, they are getting requests for the return of these functions. Swings and roundabouts really, but certainly a volume control could be extremely useful in a more Rock-orientated environment where it's always nice just to have that bit of extra control.

Firstly as an acoustic instrument the Pilgrim feels and plays extremely well. The tone is characteristically bright but not harsh and the glass fibre bowl still gives the instrument a not unpleasant sharp tone. The bass end is tight but, if anything, lacks a little warmth while the top end of the sound is strong and clear. Chords ring out very clearly, especially when chording high on the neck where the bass strings retain a good clear character. The overall string response is very even with a nice balance between strings; again it is the same all the way up the neck. Single note playing is very responsive — the top unwound strings have a powerful sound with a nice brilliance and although the wound third is at present bright, I think when the strings age a bit it could become a little dull and unmatched.

Two strap buttons are fitted, one at the base of the guitar, the other to the side of the heel, so let's strap it on and plug in. Firstly the light weight takes a bit of getting used to but the balance is perfect. The guitar, because of the pear shaped bowl, tends to move towards the neckend a little more than usual, both when sitting and standing with a strap. The face of the guitar also leans up a little but this is common for a guitar of this type. Played through an amp at a reasonable level the Pilgrim takes on quite a different tone. The top end disappears a bit and the low and middle frequencies become more pronounced. With a bit of fiddling on the eq a lot of the predominant frequencies can be eliminated but the electric tone remains far from 'acoustic'. Certainly the sound lacks transparency which would give it a more acoustic tone. Comparing this Pilgrim to an Ovation, for example, it would appear that the acoustic sound of the Pilgrim is fuller but the electric sound of a similarly priced Ovation has more of an accurate 'acoustic' tone. We're getting very close to personal observation here and suffice to say that of the two sounds on this Pilgrim I preferred the acoustic to the electric.

However the guitar is remarkably un-microphonic, which is a definite plus at high levels, although typically feedback can become a problem. (A good reason for employing a volume control I would think).

This Pilgrim is a finely made acoustic/electric combining the better elements of old and new technology. For the asking price it is virtually impossible to fault its design, construction and finish. Solely as an acoustic instrument the sound is very strong and clear but for my ears the electric sound is unremarkable, but perfectly usable. I think I'd like see a volume control fitted despite the possible detriment to the guitar's appearance, but because the instrument is so well put together it's almost as if it's saying "take me or leave me — I think I'm pretty perfect!"

Pilgrim are handled in the UK by FCN, (Contact Details). 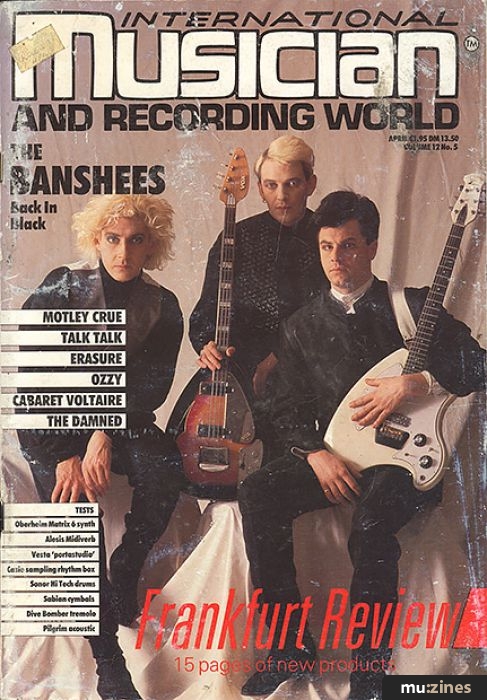