E&MM's resident FM expert, Jay Chapman, takes a critical flick through the pages of a new book intended to ease the programming on Yamaha's DX7 poly.

A book that aims to clarify the workings of Yamaha's DX7 comes under the scrutiny of E&MM's resident FM expert Jay Chapman. 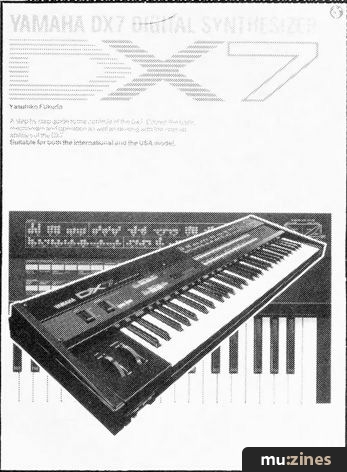 We all know the feeling. You've got a specific, long-standing need that has to be satisfied, and as soon as something that might do the trick becomes available, you make a bee-line for it. It isn't exactly what you want, of course, but it'll do something approaching a good job. Such an object is Yamaha DX7 Digital Synthesizer by Yasuhiko Fukuda. It isn't really what you want because it's not the answer to all - or even most - of your pleas for help on programming the DX7. But you'll probably buy it anyway because the market isn't exactly overflowing with books on the subject of the DX7, and every little bit helps.

It's a large-format book of 139 pages. It's imported from Japan and costs £7.95 in the UK. The cover is strengthened and protected by a plastic coating and should stand a fair amount of wear and tear. And the outside third of most of the pages is given over to diagrams illustrating points made in the text: this is generally a good idea, since if you're trying to follow a sequence of parameter changes described in the book, there's a visual confirmation of the DX7 display at regular intervals along the way.

Now for some details. The book's contents are arranged into three chapters and a five-part Appendix followed by a 'Special Introduction to DX7 owners in the USA' (just what you've always wanted, eh? - Ed). Chapters 1 and 2 deal in some detail with the material covered by the DX7 Owners' Manual, ie. the concept of FM synthesis, the use of Operators, and a parameter-by-parameter exposition of what all the front panel keypads do.

Chapter 3, meanwhile, is about 'Making Original Sounds' and should be the book's crucial element. It consists in the main of examples of how to create voices, with comments on each voice's most critical programming details.

Part 1 of the Appendix deals with the mechanism the DX7 uses to generate sinewaves, and discusses the mathematics of how Operators modulate each other to produce complex output waveforms. Part 2, which is all of one page long, suggests possible solutions to mis-setting controls, or what to do if playing your DX7 results in no sound output whatsoever. Part 3, also one page in length, deals with the use of a Yamaha KX1 Remote Keyboard to control a DX7 (or two, or three), and this is followed by Part 4, which takes two pages (gosh!) to look at the DX7's implementation of MIDI. Part 5 (pages 99 to 110) lists the parameter data for the 32 internal voices supplied with the international (read 'non-USA') version: the parameter data for the US model's voices forms half of the 'Special Intro' mentioned earlier.

The main problem with Yamaha DX7 Digital Synthesizer lies somewhere between Mr Fukuda's ears and the translator's inability to convert a sow's ear into a silk purse. It's difficult to say precisely who's been responsible for what, but whatever the causes, the text is often misleading for reasons of inaccuracy, over-simplification or generalisation. Fukuda has a tendency to assume everybody's grasped a programming point after he's presented a shallow and ineffectual explanation decorated with a couple of examples. That's why Chapter 3 fails to live up to its promise.

Perhaps I'm being over-critical, but a technical reference book of this kind simply shouldn't contain the sort of linguistic ambiguities that abound in Fukuda's epic. The author - or alternatively, his translator - insists on using 'tickles' instead of 'modulates', and talks of 'a radical algorithm': does this mean some Operator configurations are more politically active than others? I hope not. And as for 'a confused voice'... well, words fail me. Confused readers are an altogether more likely prospect.

I thought I'd give what for me is the highlight (lowlight?) of the book a paragraph of its own. See what you make of this little gem:

"The DX synthesizer operates tone by increasing harmonics, and if the output level of Modulator which seems suitable is kept unchanged, even in the range of higher tones, and no change is made in the degree of tone change, then the tones in the higher range become unpleasant."

A chapter or two of that nonsense and your brain starts pleading for mercy, believe me.

On the bright side of things, Chapters 1 and 2 (as well as other parts of the book) do give blow-by-blow accounts of the use of all editing and function keypads which DX7 newcomers will welcome as a supplement to the Owner's Manual and the Dave Bristow booklet supplied free of charge by Yamaha in the UK. And if you aren't averse to the idea of applying a bit of mental perseverance, you'll find that Fukuda passes on any number of worthwhile hints to the would-be DX programmer: some of the information hasn't, as far as I'm aware, appeared in any other form anywhere else, and this makes interesting reading even if you've written a seven-part magazine story on how to get the best out of Yamaha's FM poly...

So we end up pretty much where we came in. Even given the occasional unforgivable error and what I can only describe as a mildly eccentric interpretation of the English language, this book deserves to be on every DX owner's shelf - at least until somebody comes up with something better. And yes, I do intend buying a copy for my own use.