John Morrish in the office

SWINDON'S very own pop stars, XTC, are back in this country after a traumatic time recording their new album "Skylarking" with the strange Todd Rundgren.

But their homecoming has not been easy: the management and money problems which have plagued them since they gave up touring have reached new heights, and now there is a fear in the XTC camp that their record company, Virgin, may have finally lost patience with its most awkward act.

The Rundgren connection was an initiative by Virgin and XTC's American label Geffen to broaden the US appeal of this most English of bands by the introduction of an American producer. A list of fashionable American names brought blank expressions from the Three Boys Who Didn't Quite Shake The World.

The name Todd Rundgren had more appeal, especially to guitarist and keyboards man Dave Gregory, who confesses, "I was his biggest fan ever. I still am, as an artist. But as a producer... he really shouldn't work with other people."

But Todd had his defenders, for instance bassist and songwriter Colin Moulding who counters, "It wasn't totally disastrous. His ears are different to other people's." "What, crap?" demands writer/singer/guitarist Andy Partridge. "He's deaf, that's how different they are."

Initial recording took place at Todd's famous Woodstock studio, where facilities did not include a drummer, something which the Wiltshire men found tricky. Later the whole team decamped to San Francisco where they met up with Prairie Prince, formerly of the Tubes, who was happy to bash things with sticks.

One complaint on which all three surviving XTC men agree (original drummer Terry Chambers having long since gone off to Australia) is about the poor standard of Todd's engineering.

In some senses this seems to have been the first time that XTC have ever been 'produced'. They seem slightly taken aback by the abandon with which Rundgren proceeded to take apart and rejig their songs.

"Lillywhite and Padgham never did anything like that. David Lord never did either, though he did a bit of icing afterwards. But this was the first time we'd done any cutting about at the producer's request," remarks Partridge.

One feature of the making of the album seems to have been the amount of, er, creative tension around. The question of what was in and what was out seems to have produced a few disagreements, as did the head-on collision between the relative aesthetic viewpoints of Partridge and Rundgren. Out went Andy's 7/4 stomp 'Let's Make A Den' ("Argued to death," he admits, apparently cheerfully) and out went 'Extrovert' which suffered from Partridge's desire to "weird it up" and Rundgren's equally strong opposite convictions.

And now XTC are back in this country with a bright shiny new album, but optimism seems hard to come by. What they would have done in the old days was to be out there touring: now that's out of the question, barring a minor miracle. Partridge was on the radio the other day talking about touring and how be suddenly started to find it "crushingly lonely". The other two day-dream about getting back on the road, even in a limited way "to get us out of the shit", but concede that Andy would never get through the rehearsals.

Nowadays, recording is the band's sole reason for existing. Perhaps that's why this album has been such a trauma. Not that it was all bad: for Moulding, especially, there was a chance to get out of the way of the Partridge creative juggernaut and to produce his best set of songs in years. "Although Todd was a bit slapdash he liked to get it down and really, that's how I like to work. But he's even more slapdash than what I am," he concludes, ungrammatically but with feeling.

Strange but not true "There was a story going round that I live in a castle and wear a suit of armour all the time. And once a Dutchman came to my door and asked if he could see my collection of bicycles..." — AP.

Drummers and wires "Drummers will only last now if they don't get intimidated by mechanical timekeeping devices. If they can learn to live and love them, it's like the invention of electricity for the acoustic guitarist, if he can't get to live and love the electric guitar as well he'll end up very specialist indeed." - AP.

On being produced "I liked the way (Todd) sort of turned songs on their heads. He'd sort of slice it up, say 'Take that bit out and stick it there'. Listening to it you'd think that's not going to work, then you got used to it and you thought, bloody hell, I can't hear it any other way, it's got to be like that." — CM.

"Shopping with Todd in New York is quite an experience, because you go in places like Manny's in 48th Street and everybody's hustling, nobody's got time for the poor bum on the street who only wants a packet of strings. Todd walks in and it's: 'Hi Todd, how're you doing?'" - DG.

"'Todd baby, come over, meet the guys.' It really is all these people with brown rings round their noses. And there we are trying to keep up with the whole party going through the shop and there they are saying 'What d'you guys want?' and we say, 'We're with him'." - AP.

"We had to wheel it through the fucking streets of New York, like the bloody start of Rhoda where they're wheeling that rack of clothes around. That's us, wheeling this bloody enormous Prophet 10 in a flightcase on wheels looking for where the car was. 'I could've sworn it was here.' Some people were following us and this bloke said, 'Did you see who that was, that was Todd Rundgren.' And I said, 'No it's not,' and his girlfriend hit him and said, 'Don't be so stupid, I told you it wasn't.'" - AP.

Ralph Denyer in the camera shop

"Oh, Moulding's got the bug now. He's come up with some real buggers." - AP. "The guitars in the studio, the strings on them were up and down like a whore's drawers." - CM.

"They're mostly things like open E, but there's one in D6 tuning and he had one which was normal tuning apart from the G string's tuned down to E." - AP.

"You think, if only I could play that tune easier. You know, your hands are stretching and you think, I need to play that tune, what do I have to do? So you start messing around..." - CM.

"Did we have our Chamberlain flutes on this? No, we took them off didn't we? The Chamberlain is a swish American version of the Mellotron. They have their own brand called a Chamberlain which is bigger and bolder — certainly older. All the sounds in it were dead 40s, saxophones and clarinets. You played a chord and it sounded like Glen Miller. I wanted to use the Chamberlain more but basically it was in very, very bad repair. We had to clear dead mice out of it. Where they'd pulled out all the stuffing there was a nest in there and a dead mouse on its back in classic crosseyed position. Whether it was bored to death... (squeaks). 'For God's sake, play something else.' It sounds very like film music from those black and white films on Sunday afternoons. I think it was a mixture of the recording techniques and the instruments played in that style." — AP.

"Todd was worried about using too much strings on the album. He knew that there were going to be a couple of songs that were totally strings so he was worried about spreading that over the rest. But one song has got this tune going through it, and we were a bit stuck to find an instrument that could play the melody and have the right sort of refrain to it. We did it on a guitar on my demo but it didn't seem to sound strong enough. The idea was to try and get the violins to play the tune as well and that seemed to work. It's sort of oriental sounding... it reminds me of 'How Do You Sleep'." - CM.

"The electric guitar, that's a real Beatley sound. Todd's got an old Vox "Beatle" amp, made for the American market in the Sixties. It sounds wonderful, like all the guitars on all the Beatles and Rolling Stones records." — DG.

"And I used my old Epiphone Riviera: it was the perfect combination." — DG. "Riveria! What a fucking name. Why don't they call instruments names any more? The Dreadnought... the Neverfail." — AP. "The Watkins Dominator." — CM.

"Just the name of it was intimidating enough to be the loudest instrument in the band. By the way, has anyone ever seen another Swaylee Goldenstone?" — AP. "I bet Paul Day's got one." — DG.

"The birds on 'Summer's Cauldron' are mostly Fairlight samples of tweeting birds. We picked all the ones which had rhythms to them like this: 'tweet-tweet-tweet-tweet'. Forget the key, just get it so it's in rhythm with the track. So you've got kind of rhythmic birds. And there's a cricket in there too. Originally the song was a little faster than it came out. Todd slowed it down a little and sped 'Grass' up because he wanted to marry the two songs together. There was no edit. We had to learn to play the two songs going from one into the other." - AP.

Nails And Their Nature 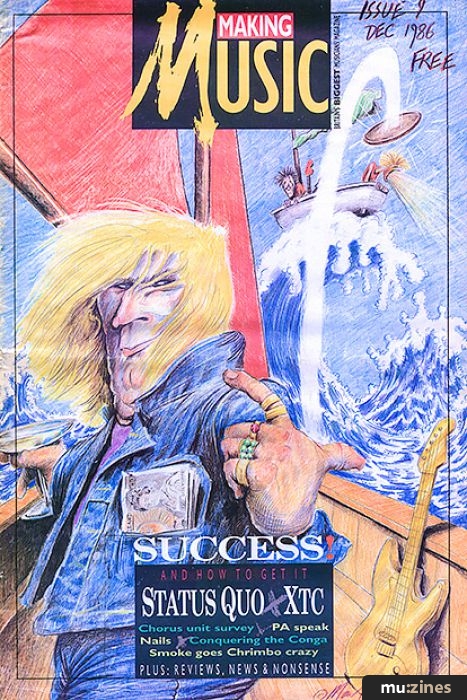 
Other articles featuring this artist:

> Nails And Their Nature