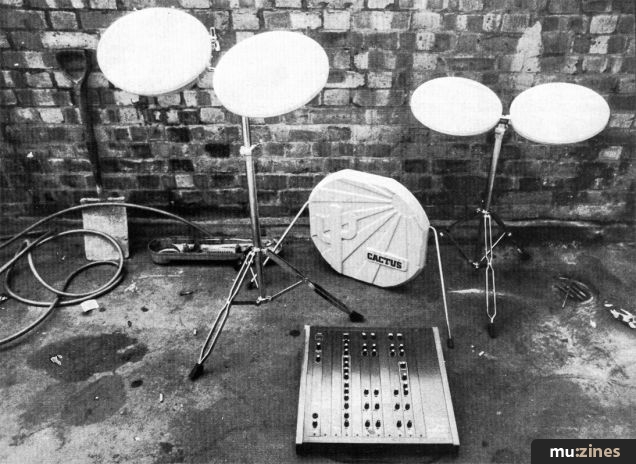 Whichever way you care to look at it, the manufacturers of Cactus Drums are in an unenviable position. For a start their main competitor in this relatively new market is one Dave Simmons. He invented the electronic drum. He was the first to make a synthetic kit commercially available and his SDS5 was the first model of its kind to breakthrough the credibility barrier with both drummers and record producers.

Being the first means that he's had a four year head start in the important matter of dealing with the various teething problems which his instruments have inevitably been through, and being successful means that he has enjoyed the incentive to research and develop new and better ideas. All of which has culminated in the SDS8, an improved version of the SDS5 which retails at £750, fifty quid less than the Cactus.

Meanwhile the technology upon which all the makers depend surges forward at what must, for them, be an alarming rate, threatening to make a new product redundant by the time it arrives in the shops. So for its own sake a new kit had better be well thought out and offer some kind of longevity for the customer.

The trouble is, of course, that the only thing you can be sure of in the music business is that you never know what's going to happen next. No one knows how long a sound will appeal to either players or listeners, least of all the hapless manufacturer, for whom the prospect of predicting the favoured sound at least a year ahead (in order to actually make the kit) must seem about as easy as playing roulette. The chances against are enormous.

Which brings us to the Cactus Desert drum kit. For £795 you get five pads, including bass drum and spurs, two tom tom stands, control console and leads.

The pads are made of light, two-piece plastic; those for the snare and tom being circular and 30cm in diameter with a gently sloping face. The bass drum is a more rectangular affair with rounded edges, two straight spurs with optional pointed or rubber tips and a sensible, shock-absorbing rubber pad which is intended to cushion the impact of the beater as the drummer hammers away relentlessly. Though they do offer less of the unyielding, table top resistance of the old SDS5 riot shield plastic, the circular pads make an even louder 'Bok!' when struck than the Simmons used to – something Simmons have since eliminated with their new generation of rubber topped pads.

This noise proves to be most tiresome when you come to grapple with the programming itself since you have to monitor the module sound quite loud, even using the headphone facility, in order to be sure that the pad noise doesn't distract or confuse.

On the test set, which bore the marks of having been fairly severely dealt with before I got hold of it, the snare and tom pads were actually in a good state of repair, but the bass drum pad's two halves (front and back) were already beginning to part company, and in overall terms I couldn't say that the pads looked especially robust or impressive.

The stands are very much a different matter. They look suspiciously like the Promuco, Japanese made stands imported by Ludwig in the UK. Strong, double-flanged tripod legs, plenty of height adjustment, sturdy wing nuts holding everything firmly in place and the trusty L bracket method providing mounting and positional flexibility for the individual pads. Every bit as solid as the pads seem fragile.

As far as I could see, however, these are two double tom tom holders. There was no facility on the test set to position the snare pad in-line with, but lower than, the first tom, as you would on a regular kit. The simple bracket provided with the Music Percussion Computer set up, which can be attached to any part of the top half of the stand, does this job admirably.

So much for the spuds, I hear you say, but what of the meat? The control console is a weighty construction which looks more like a small sound mixer with its flat, slightly angled layout. Rack mounting is an optional choice. The unit can house up to ten modules but since the basic kit comprises snare, bass drum, two toms and one synth channel, there are a lot of empty spaces covered by metal strips. 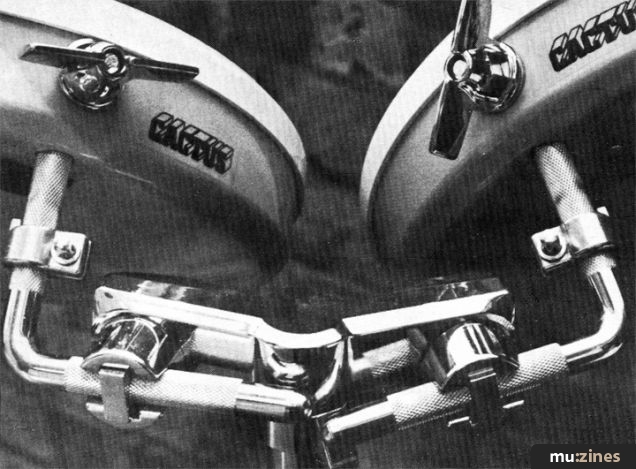 The mixer channel is essential to the unit since it contains the on/off switch, an overall stereo output level control (or knob, as we say in the trade), and a metronome level control designed to work with the Cactus sequencer. There is a headphone socket and volume control with which the user can minimise wear and tear on neighbours or loved ones, but otherwise that's your lot.

Each of the two tom modules has its own volume control, a pan pot, pitch and decay controls and a sensitivity knob which affects the amount of welly required to trigger the sound with the pad. The sounds themselves are digitally recorded and are serviceable but straightforward in terms of quality.

Set the pitch control at twelve o'clock and you can hear the recorded frequency, turn it either way and the sound can be varied from the ping-pong 'boing' reminiscent of the syn drum to a deep, squelch. The artificially created decay contains noticeable harmonic overtones which would cause trouble in the studio but probably pass unnoticed in the pandemonium of the average gig. Essentially it's the inflexibility of the tom sounds which worry me most.

The same control governs the bass drum module but the lack of variability is less critical in this case as the basic sound is perfectly workable and bass drum sounds in general are probably the least varied in the modern drum kit, electronic or otherwise. This one is suitably punchy with that extra bottom end which is so characteristic of the synthetic sound.

The snare drum module is afforded the luxury of three extra knobs which are well worth their inclusion. If bass drum sounds are fairly uniform, current snares can vary from the dink of the tapped drainpipe to the crack of a rifle.

The two frequency controls offer variations on the theme of white noise and the third determines the blend of this sound with the digital 'real' sound. With all the controls set to the recommended values suggested in the manual you get a crisp, bright, almost military sound which would record well and cut through at a gig. A gnat's down on the pitch control and you can fabricate a lower, fatter, more Al Jackson sound. As far as conventional sound variations go, that's more or less it. Cut out those analogue filters and the snare sounds dull and boxy. Push their level beyond the manual limits and you're ready to dub the sound onto a film of a table tennis match.

Included in the regular console is a synth channel which produces artificial sounds that can be used either to create alternative snare, bass drum or tom sounds, or to add a degree of variation to an existing digital tone by use of its feedthrough circuit, varying the blend of the two elements.

The basic volume, pan, decay and sensitivity controls found in the other modules are fleshed out by a noise section comprising level, frequency sweep and resonance controls (all self-explanatory), a tone section with its own level pitch and bend controls (ditto) and a click circuit with its own level control. Set to recommended positions, the bass drum alternative was solid and useful, the snare thin and the tom sounded somewhat less convincing than the digital versions.

Improving with the controls again reveals that the illustrated levels are about as good as you can get. Tilt either way and the sound disperses into white noise of assorted shapes and intensities – good if you're looking for sound effects rather than simulated drums and fine for adding a fizz or buzz to the digital tone via the feedthrough device.

The major drawback is only being able to make such improvements to one channel at a time.

Including the synth channel in each of the digital modules would obviously make the Cactus more expensive, something I'm sure the makers have tried very hard to avoid.

The appearance of the SDS8 must have been quite a blow to the hopes of the Desert drum manufacturers. If this kit had been on the market a year ago I'm sure it would have sold. Now, and in comparison to the competition, it seems like too little, too late. 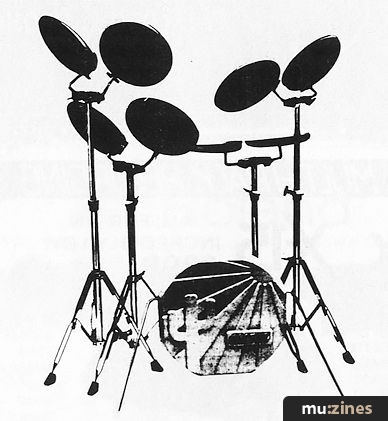 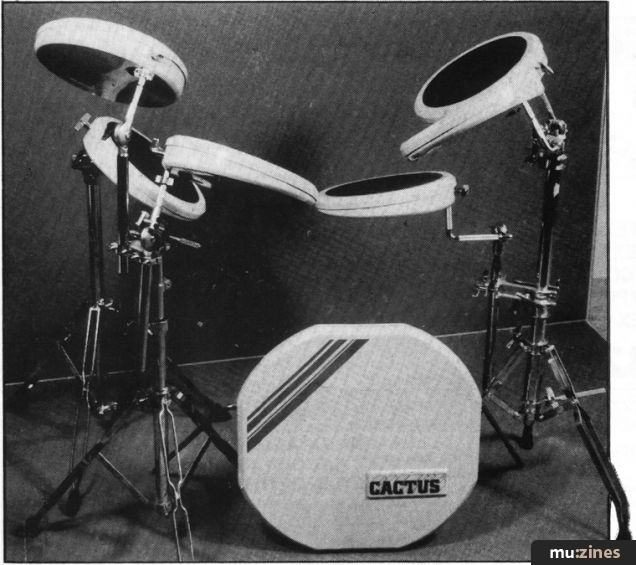 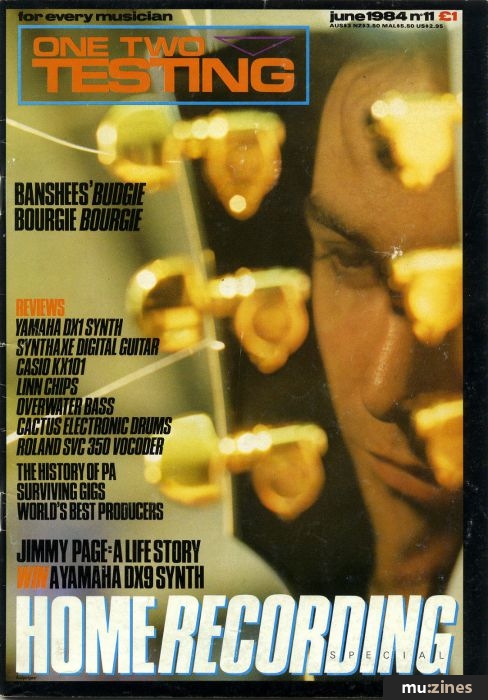 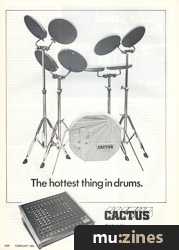 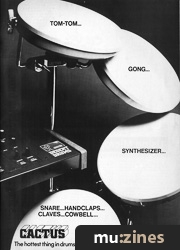