The price guide to end all price guides. This time, we return to drum machines and electronic drum kits, and find a lot has changed in three months.

It doesn't seem like six months since we started the musical instrument world's most comprehensive - and most outspoken - buyer's guide to gear. Just to remind you of the formula, we split the hi-tech hardware and software field into three sections, with each section getting an airing once every three months. This month it's the turn of electronic percussion, which means a rundown of all the drum machines and electronic drum systems currently available in the UK, from companies big and small, British and foreign.

We list the typical selling price and basic facilities of each product, and also include some of our own comments (positive, negative and conclusive) if it's passed through the hands of our reviewing team at some stage.

Three months ago, when we listed electronic percussion devices for the first time, we mentioned in the introduction that the market was the subject of a downward price spiral fiercer than any other in what is a fast-moving market at the best of times. That's still true as summer turns to autumn, as importers and retailers try to rid themselves of surplus outdated stock in order to make room for newer gear. And that isn't in any way a bad thing for the musician, because it means you can find a slightly older, less-fashionable product (a Drumtraks, say, or an original Drumulator) that offers more than a contemporary competitor for rather less money.

It's a tough old world out there, so you might as well grab it by the scruff of the neck and make the most of it. Don't take our prices as gospel, and haggle if you sense the dealer is anxious to make a sale.

Next month, it's back to polysynths, expanders and remote keyboards.

Master Rhythm - £129 13-voice analogue drum machine. 24 programmable patterns, mono output; 2 cymbals, rimshot, brushes, claves, snare, 4 toms, 2 bongos, conga, bass drum.
+ Wide range of voices for the money;
- doesn't sound as good as DR110, and isn't as easy to use;
= if the voices are the ones you want, there's simply no alternative. 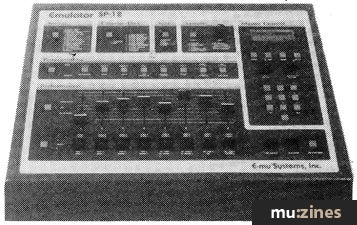 DDM220 - £225 Latin Percussion version of DDM110, spec as above except for voicing; 2 congas, timbale, wood block, cowbell, agogos, cabasa, tambourine,
+ Marvellously realistic approximations of Latin drums that really do sound different;
- nothing at this price, except non-Roland standard sync;
= the first drum machine to offer more than the usual rock percussion set-up, and they're not charging the earth for it.

MR16 - £449 19-voice digital drum machine for connection to pre-existing MIDI software, individual and stereo outputs,
+ Voices identical to those of DDM110/220, hence pretty good,
- some dodgy ergonomics, not cheap when combined with essential SQD1 sequencer;
= a sound enough idea that now has an excellent sequencer (Korg's own SQD1) to go with it, though there's still no specifically drum software to perform specifically drum tasks.

TR727 - £525 15-voice percussion version of TR707: facilities as above except for voicing. 2 bongos, 3 congas, 2 timbales, 2 agogos, 2 whistles, quijada, cabasa, maracas, star chimes.
+ All the 707's attributes, with an equally marvellous selection of sounds;
- 707 and 727 together cost too much: if only Roland believed in replacement voice chips;
= like a big-budget Korg DDM220 and every bit as useful - if you like Latin sounds.

TR909 - £425 11-voice analogue/digital hybrid drum machine. 96 programmable patterns, real-and step-time programming, LED display, individual and stereo outputs, MIDI (In, Out, Thru) and sync 24 equipped, cartridge and cassette storage of programs; 2 bass drums, 2 snares, 6 toms, rim shot, handclap, open & closed hi-hat, 2 cymbals.
+ Mainly-analogue sounds will retain charm so long as TR808 remains in fashion...;
- ...but sound weak next to Roland's own digital fare;
= outdated machine now out of production, too, but haggle with the dealer and you've got yourself a bargain. 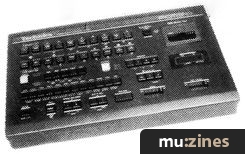 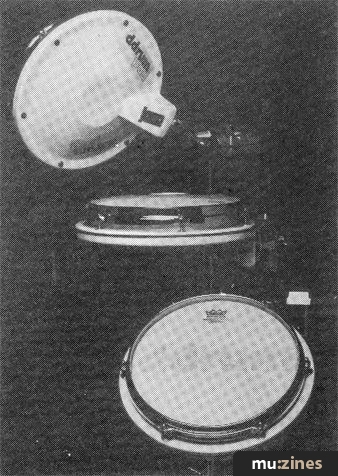 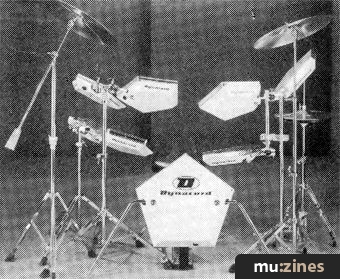 CDX11 - £TBA As above, but with five voices and rimshot.

CQX3 - £TBA Real-time drum sequencer. MIDI (In, Out, Thru), external input from pads. All Hohner electronic percussion machines to be reviewed.

MultiKlone - £399 Five-channel analogue drum kit. 5 identical sound channels, 5 Trigger Ins, 5 Audio Outs, auto flam facility.
+ Flexible budget electronic drum kit, useful as either an add-on to an acoustic kit or in its own right;
- only one preset and one user-programmed sound simultaneously available for each channel;
= remarkably good sounds for very little money, deserves to rule the budget roost for quite a while.

DSM8 - £199 Auto-tom unit producing tom roll from single pad strike or sequencer trigger, incorporates voicing circuitry and sequencing electronics.
+ Certainly very clever, and pretty cheap for what you get;
- has to be powered from MPC drum module, built-in tom sounds are hardly revolutionary;
= decent budget sequencing machine for the lazy and/or incompetent.

SDS7 - £2156 Five-channel analogue/digital hybrid electronic drum kit. Expandable to 12 channels, each channel has individually-controllable analogue, digital and noise sound sources, 100 different 'kit' programs.
+ Unrivalled sonic flexibility thanks to variety of sound sources, handy 'pad' program selector, impeccable pad design;
- if you can afford it, nothing;
= rapidly becoming to the electronic drum world what the Linn Drum is to the drum machine market, and deservedly so: MIDI coming soon.

SDS EPB - £392 EPROM blower to be triggered by SDS7 and SDS1. Blows 8K and 16K EPROMs from onboard RAM, variable sample speed.
+ Quick, easy way of making your electronic drum kit sound like no-one else's, fits in neatly with Simmons scheme of things;
- no avoiding the fact that sampling quality could be better;
= pioneer product that serves its purpose while leaving room for subsequent improvement.

Techstar TS500 - £930 Five-pad, six-channel analogue electronic drum kit. One preset and one user-programmable voice per channel, trigger inputs, individual and stereo outputs.
+ Generally good (if derivative) sounds, excellent pads, neat rimshot facility;
- like so many imitators, it lacks character;
= serviceable Simmons alternative from the first acoustic company to go hi-tech - with more products on the way in the near future. 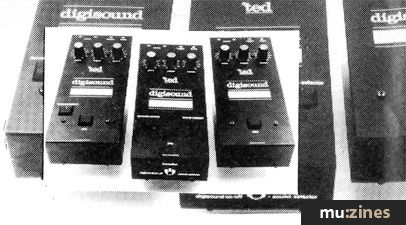 Digimemory - £TBA Universal EPROM version of Digisound. To be reviewed.

UP5 - £555 Five-pad analogue electronic drum kit. Eight preset kit voicings, individual and stereo outputs.
+ Fine analogue sounds, follows Simmons philosophy of deliberately restricting range of sounds available;
- nothing, save that it doesn't have Simmons written on it;
= so long as you don't want access to a wide variety of drum sounds, the best way of getting into electronic drums.