A major problem facing most demo makers who work at home is that ideally they would like to be able to use the same speakers for monitoring purposes as they would for their normal, everyday Hi-Fi listening. In reality, very few normal 'Hi-Fi' speakers are up to the job.

Hi-Fi speakers often claim to offer a completely flat response but, understandably, there is always a temptation on the part of the makers of mass market equipment to make the occasional subtle 'tweak' to the sound so that when they are judged subjectively (which is, after all, how we actually listen to speakers before buying them) they offer a pleasing (if inaccurate) sound.

And then again there is considerable division of opinion in studio land as to what constitutes a genuine 'flat' speaker — and is that what you want anyway? Surely, one argument runs, if you monitor on a very unflattering speaker, the resulting mix will sound good on anything?

There are great holes in that argument, of course, because you may well do your final mixdown on a bass heavy speaker only to find it being eventually heard on a genuine 'flat' system. The resulting tape will then sound to the listener as if you have put insufficient bass on it — hence a lack of concepts like 'drive', 'power' or 'energy' might be the reasons for rejecting your demo.

One manufacturer who has a foot in both monitoring and Hi-Fi camps is Electro-Voice whose range of Hi-Fi units features some very clever ideas indeed. Musicians who have used EV instrument speakers will know how tough this maker's products are and, moreover, how efficient.

This question of efficiency (ie the amount of output volume given per watt of input from the power amp) is rather important when listening to EV speakers destined for Hi-Fi use as the same principle has been applied here, the models we tried, the Link 9's, giving a quoted figure of 90dB sound pressure level for 3.6 watts input. This means that the Links are considerably more efficient than many other speakers we have tried and will give a noticeably higher level of output per watt of input. We tried them up against our standard reference speakers (JBL 4311's) and found them quite obviously louder for the same input levels. Moral? Well, you don't need quite such a big amp to drive the Link 9's as you do with most speakers.

"THEY ARE LIGHT TO MOVE AROUND AND VERY WELL FINISHED."

Construction of the Link 9's was very good. These come not from the USA, as might be supposed, but from EV's new plant in Nidau, Switzerland, and seem to have been manufactured with a typically Swiss attention to detail finish. They're a three way system, in optional walnut or oak veneered chipboard. Inside live three drivers, a 10" LF radiator, 8" midrange and ¼" 'superdome' (as EV call it) tweeter. Impedance is given as a nominal 8 ohms (suitable for nearly all common amps) and the overall size of the units is 61.5cm x 35cm x 27.5cm. This size makes the Link 9's halfway between floor standing and large shelf mounting units — ideal in dimensions, therefore, when used in a small control room environment. They are light to move around and very well finished. Frequency range from the spec, sheet is a very impressive 39-20,000Hz ± 3dB from 47-18,000 Hz. In effect a considerable range to offer at such a low retail price — especially given the efficiency of this combined three way system.

The key to the design of the Link Series speakers (there are Link 7, 8, 9 and 10 models) lies in the design theory of an Australian acoustic scientist by the name of A.N.Thiele (pronounced Teel). His ideas lead designers away from normal bass reflex enclosures and normal Acoustic Suspension designs towards a different type of system which they have dubbed 'optimally vented design'. The theory behind all this is well beyond the reach of most of us and would take too long to go into here, but suffice it to say that Thiele's work is genuine and much admired in speaker design circles, even if not totally agreed upon by all makers and designers. In practice, (following Thiele's ideas) then one would expect the Link 9's to be A) louder than most speakers and B) with a better bass response.

We subjected a pair of these units to fairly exhaustive tests with MUSIC U.K.'s standard reference set-up of an HH V-500 MOS-FET power amp, an MXR System Pre-amp and sources ranging from Metal cassette tape (TDK MA-R, Dolby C noise reduced) to record source and others to see how the maker's claims stood up.

"THEY DON'T SHOUT AT YOU LIKE SOME BRANDS AND YET THEY ARE FULL AND REWARDING TO LISTEN TO."

Firstly, we accept without reservation the point about the Link 9's efficiency. Compared with other speakers, the Links were very loud indeed for identically measured regulated inputs, giving a sound pressure level with the HH which should satisfy even the most dulled of musician's ears! Moreover the quoted frequency response seemed to be accurate when compared with specified studio monitors in our system — ie you could hear both exceptionally low and high notes with no obvious distortion and no apparent tendency towards straining or general unfaithfulness of tone.

Subjectively the Link 9's are remarkably more capable of delivering convincing bass tones than many similarly priced and sized units — offering a tonal warmth which we found very pleasing indeed. How accurate this bass response may be is a matter of debate as the sound of all speakers depends on variable factors and must be a matter of taste. Either way the Links justified their price tag — and even beyond it, by giving a good fidelity at the top end when compared with normal small monitors and with an added bass response which, although quite pronounced, owed nothing to the familiar problems of 'boom' and 'whoom' of poorly designed inexpensive conventional reflex systems.

EV claim that their Links offer neither an East Coast nor a West Coast sound. That may be O.K. for the U.S. market but they do have that obviously American sound to them which makes them fine speakers for Rock music. They're loud and they're strong but without the harshness which can afflict some other U.S. designs. They don't shout at you (even given the extra dB per watt rating) like some brands and yet they are full and rewarding to listen to.

Although not designed as monitors (EV make other models for that purpose) these Link 9's would be very good for home studio use doubling for Hi-Fi employment given that you felt their bass response to be usable. The problem here would be that although the monitoring of your tape might be accurate in fact (or, at least, very pleasing) the resultant tape might be equalised during mixdown for a speaker which was so much nicer to listen to than many that the recipient of your tape might well be listening to it on speakers which didn't respond in the same way — ie his speakers might be quieter and less capable of giving a convincing bass response than these. For monitoring the EV's are too flattering, that is, if you subscribe to the theory that you should monitor on a belt and braces approach.

For Hi-Fi use, however, the EV's are excellent and any musican reader would be advised to overcome his or her prejudice against American speakers and listen to these. Not widely available (mainly due to U.K. Hi-Fi buffs' prejudice against American designed speakers) interested readers should contact the importers direct to find their main local stockist. The address is (Contact Details). 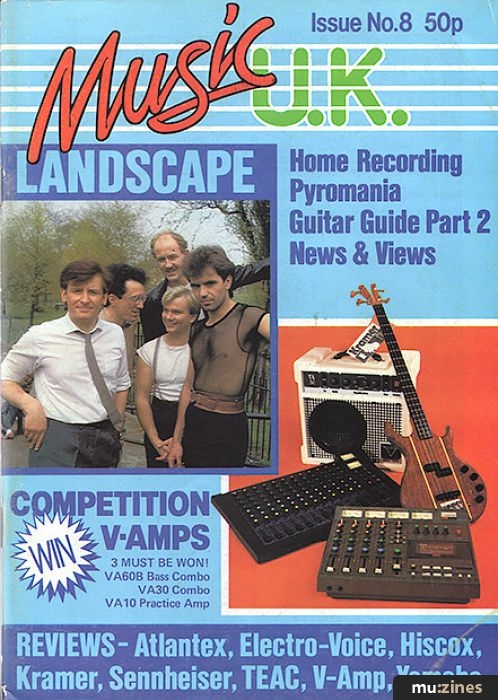