For years the budget in-line mixing desk has been the domain of British and American makers. Chris Kempster finds out if the new Tascam M2600 can tip the scales in favour of Japan

There's a popular myth that the home-studio revolution has been fuelled solely by the development of affordable multitrack tape recorders. Sure, they've been crucial. From the Fostex A8 (the first deck to squeeze eight tracks onto a quarter-inch analogue reel) to the ADAT (which effectively has done the same job in the digital domain), multitrack machines have been the inspiration for many musicians to embark on the journey toward building a serious studio of their own. But if the tape recorders have been the tickets, the passport that has ensured admission to this brave new land has been the in-line, eight-buss mixing desk. After all, those tracks of audio have all got to be assembled, processed, and sorted out somewhere, and that somewhere has to be a mixing console with a sufficient number of inputs, outputs, and onboard controls to do the job.

Perhaps more than anything else, it's the emergence of this type of mixer that has made it viable for many people to assemble 16-track, 24-track, and even more-track studios, where they had previously been restricted to eight. We have a lot to thank it for. But you can have too much of a good thing, and I wasn't exactly overjoyed when I learned I had yet another one to review - although my enthusiasm was fired a little by the fact that this one was a Tascam.

In the past, Tascam have refrained from joining the rush downmarket, in pursuit of the budget-buying punter - at least when it comes to mixers. They have continued producing extremely well-constructed desks, in a slightly loftier area of the market than the Spirits and Studiomasters of this world. There's always an aura of reassuring quality to a Tascam mixer, and that even includes the first mixer I owned, the humble Model 2A, which was built like a tank. Though it only had six input channels, the 2A came complete with a cushioned front end and tasteful wooden end cheeks, giving a taste of the luxuries that only usually come on expensive consoles.

It left a favourable impression, so it was with some interest that I unpacked their latest console, the M2600. The 16-channel version is reviewed here, but there are also 24- and 32-channel models.

The ergonomic layout and aesthetics of an in-line console are crucial to its ease to use, since a lot of controls have to be accommodated in a relatively small space. On first perusal of a console, I can usually tell whether I'll be able to get on with it or not, by asking myself some simple questions. Is the colour scheme bearable? Is the layout logical? Is everything within easy reach?

The M2600's overall colour is grey, like so many mixers these days; while not exactly inspiring, it does mean that the coloured pots are easy to pick out in the various states of semi-darkness that characterise the average project studio. There's a kind of semi-rubberised plastic case which functions as an armrest at the front, and as endcheeks at the side. Although it's a bit plasticky, it actually serves its purpose rather well.

The input channels, as usual, are situated to the left, with the master section on the right. There are ten LED ladders above the master section - eight for the groups and two for the masters. All connections are made on the back, and the only omission I could spot was that there's provision for only one two-track machine. The connections for the two-track are balanced XLRs - fine if you're hooking up a high-end timecode DAT recorder or suchlike, not so clever if your mastering machine is a more humble consumer DAT for which jacks or (especially) phonos would be much more sensible. If you want to connect more than one two-track machine (a second DAT or a cassette deck, say), you'll need to press spare input channels into service, or use a patchbay.

In common with all similar desks in this price bracket, the M2600 gets its power from an external unit in the interests of electrical isolation; this particular power supply is a meaty affair which racks conveniently in 2U of space - though there should ideally be at least 1U of unoccupied space top and bottom to ensure proper air circulation.

The monitor control colour scheme reminds me of another recent arrival in this market area, the Soundtracs Topaz. The monitor level, pan and mute controls are situated on a band of lighter grey than the rest of the control surface, and this makes it easier to locate the monitor controls in a sea of channel controls. The monitor EQ section of the Topaz was also highlighted in a similar fashion, but this isn't viable on the M2600, because the EQ is split into two sections which are both switchable between the monitor signal path and the channel signal path.

The first section consists of two shelving controls, fixed at 12kHz (treble) and 80Hz (bass), while the second has two swept mids - one from 400Hz to 16kHz, the other from 40Hz to 1.6kHz. The range of the EQ section is no more extensive than other mixers in the class, but the way it's configured means that it's much more flexible when it comes to mixdown.

"The 'Direct' button is placed below the channel panpot, which could save a lot of stretching across the console"

In practice, I found this arrangement worked well. Inline desks all too often restrict your monitor inputs to synths, samplers, and drum machines - hardware with onboard EQ or some alternative form of sound-shaping. This restriction is lifted on the M2600.


The aux sends are also more flexible than those on many comparable desks. Auxes 1-2 and 3-4 are two stereo sends, which take their signals from the channel fader and monitor level pot respectively. By using the 'post' switch, you can take the signal either before or after the fader.

There are four further aux sends, with the first two dedicated to the channel signal, and the last two switchable between channel and monitor, with the signals taken post-fader and postmonitor level. While tracking, the two stereo sends will be used as cue mixes, but they can also be pressed into action at mixdown as extra effects sends, which in these FX-crazy times, you can never have enough of.

The rest of the channel strip is very conventional, with a 20dB pad, line/mic switch, trim pot, and flip switch (to switch the monitor signal onto the main fader) at the top; and a panpot, solo and mute buttons, routing switches, and main fader at the bottom.

The 'direct' button sends the input signal straight to the tape outs when track laying (as opposed to the group faders, for grouping several signals before going to the multitrack). It's placed below the channel panpot, as opposed to the more conventional siting at the top of the channel strip. This is a neat idea - depending on how you operate, it could save a lot of stretching across the console.

The main faders are reassuringly smooth and (not to be taken for granted, this) consistent right across the desk.

The master section is deceptively simple, and that's usually a good sign - unless, of course, it really is simple. All the facilities you would expect to see are present and correct. Above the eight group faders are solo, mute, and mix buttons, while the six stereo effects returns have level and pan pots, routing buttons and a solo switch. The aux masters are split into two sections, one for the two stereo sends and one for the remaining four sends.

One excellent feature is that effects can be shared by both the monitor and channel signals, using the M2600's 'sum' button, which combines aux sends 5 and 7, and 6 and 8. Only last month, a reader of one of this magazine's ancestor, Home & Studio Recording, called up to ask if there was any budget mixer that had this facility, and I had to reply that I knew of none that did. Well, if you're reading this, Mr Cotton, here is that mixer; now! you can route both monitor and channel signals to the same effects processor, should you wish.

Japanese mixing desks have rarely made a big impact in either European or American project studios. Always well-built and often attractively priced, they have somehow been a step or two behind the game when it comes to the kind of clever design touches that tend to sway potential purchasers.

Tascam have sought to reverse this trend by encouraging the involvement of British (well, certainly Scottish - Ed) and American engineers in the design of the M2600, and the policy has paid big dividends. This is a mixer which isn't just competitive in its class - it offers some smart extras that genuinely mark it out from the rest of the pack.

The flexible nature of the EQ goes a long way toward getting around the perennial in-line problem of mediocre equalisation on the monitor signal - something that can be lived with while monitoring, but which can be a real pain in the backside when it comes to mixdown.

The other commendable feature is the ability to send both channel and monitor signals to the same effects processors using the 'sum' facility. Again, this helps overcome some of the limitations associated with in-line consoles, where the two signal paths are normally mutually exclusive.

The only small niggles I have concern the lack of provision for a second (let alone third) two-track machine, and the plasticky feel of the case and armrest.

So it seems that, finally, the Japanese have produced a budget console that is as well thought-out as it is carefully constructed. A console, in fact, that can do as much for the development of the home studio as the legions of affordable multitrack machines produced by this very same manufacturer. 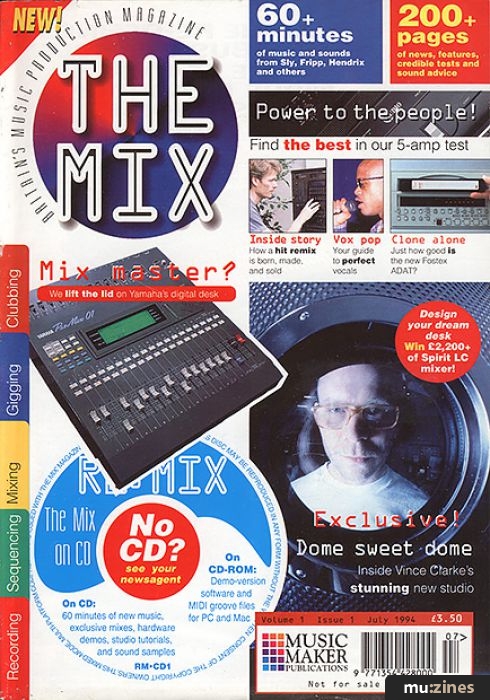 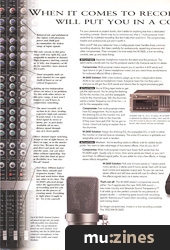