Cassette machines have come a long way since I first had one in 1967. In fact, my first taste of 'hi-fi' was via this mono machine playing a stereo musicassette of Pepper through a mono wired pair of stereo headphones! However, to come back to the present, although there are a large number of models to choose from, very little gets written about tape machines compared say to pickup cartridges. This is a pity since many of our readers, being musicians, will use their cassette decks for live recording.

If you lift the cover of your cassette player you will see the heads. Incidentally, although it should be self-evident, no tape machine will work to its full potential if these are not cleaned regularly. Nor, I hasten to say, should they be cleaned with 'Duraglit' as an acquaintance of mine once did! Proprietry fluid or WD40 should be used, applied gently with a cotton bud.

A tape recorder works by converting the incoming signal to a varying magnetic field across the gap in the record head. As the tape passes its magnetic coating stores the signal. On replay the small magnetic variations left on the tape by the recording head are recovered and amplified by the internal electronics. The output signal from the replay head though is very small — about the magnitude of some moving-coil cartridges' output. All would be well if the transfer characteristics of magnetic tape were linear but it isn't. Moreover, for good results the tape head recording gap needs to be very small. The reason is that at high frequencies the gap becomes comparable in size with the magnetic particles of the tape itself.

For cassette players the problems are multiplied by the relatively slow speed of the tape. A good reel-to-reel recorder operating at high speed will have a much better top response due to the fact that more particles are passing the head every second. Figure 1a shows what happens when a magnetic field is applied to a tape. Note that this transfer curve is far from linear. To overcome the severe distortion that would result if audio were to be simply fed to the head, bias is employed. In early machines the biasing was accomplished by means of a permanent magnet as was tape erasure. These days though a high frequency bias signal is used. What actually gets on to the tape is a composite signal with the audio riding on top of the bias signal (Figure 1b). In this way the signal is applied to the more or less linear portion of the transfer characteristic.

Because this signal is ultrasonic it cannot be directly accommodated by the tape and doesn't actually get recorded. The bias is also used to erase the tape. Often the inductance of the erase head is used as part of the bias oscillator circuit. When erasing, the hf jumbles the magnetic particles up in a random manner. When recording, the tape is passed in front of the erase head before the recording head thus removing the previous recording. The recording head needs to be fed with current in order to magnetise the tape. However, the head is largely an inductive load. This means that its impedance rises with increasing frequency. In order to maintain the flux the head has to be supplied with constant current drive. In the days of valves this was easily obtained by feeding the head from the anode via a large resistor. This worked because the high supply voltages used with these amplifiers meant a nearly equally large signal swing.

Nowadays, as often as not, the head is included within the feedback loop of the record amplifier to provide the necessary drive. The internal pre-amp and playback amplifiers also use equalisation to reduce noise and maintain a flat response. The record amp has treble pre-emphasis built in whilst the playback amplifier provides deemphasis.

As you can imagine, every different tape formulation has a unique transfer characteristic and so the amount of bias used is critical. Too much bias and the treble becomes recessed; too little and the treble is emphasised at the expense of both the bass and mid range. Ideally, you will find a bias control on your cassette deck to enable different tapes to be used.

Finally, perhaps a word about what happens when the tape is overloaded. It is important that the playback amps do not clip before the tape saturates. Tape saturation is a comparatively gentle process akin to soft-limiting without generating large amounts of high-order harmonic distortions. Figure 2 shows the effect on the replay frequency response as signal level is varied. Note the early fall of the top response as signal level increases. Indeed,this is the most damaging effect of increasing signal, and is known as hf compression.

Unfortunately, it does not follow that the more expensive the tape you buy the better your recording. So much depends on the way the machine has been set up. For serious recording therefore, get a machine with variable biasing and invest in a test oscillator to set it up properly. At least this way you will be assured of the best possible results whichever tape is used. If your machine lacks this feature the best that can be done is to try the various tape types until you find one with the best response for your machine.

Live recording is a creative process which suffers somewhat from the constraints of the cassette medium. In particular, splicing a cassette is, to say the least, hit and miss. A good mixer is a must unless one is addicted to very simple miking techniques. Ideally a compander should be used (see E&MM May 1981 'Noise reduction unit') as this will allow a recording to be made which will not lurch uneasily between being drowned in noise and overload distortion. Much of the poor reputation of cassette decks in the hi-fi sense is due to inadequate care in the recording process. Another cause is poor maintenance. Tape dropout, wow, flutter and hf loss are more often due to wear, or the accumulation of dirt and grease on the heads and pinch wheel than any serious shortcoming of the equipment. Purists advocate the cleaning of these parts before every recording but they should be attended to at least once a week. 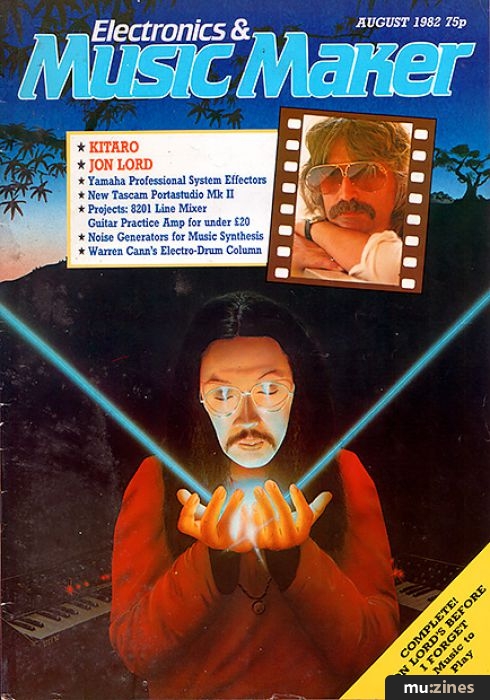