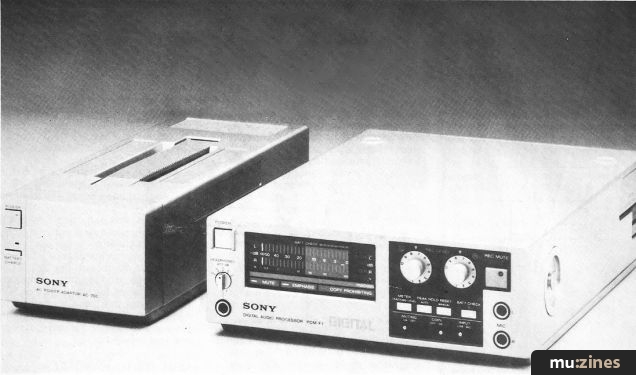 In the December 83 and January 84 issues of HSR I covered the basic aspects of the Sony PCM F1 'digital on VTR' system. Digital recording is still, of course, in its early days and it may well not remain associated with VTR (video tape recorder) machine storage. But the F1 has found its way into many pro recording situations and consequently, it is becoming endearingly entrenched as an 'after multitrack' mastering machine, apart from straight stereo usage.

Assuming the use of a PCM F1 processor (or the lower cost PCM 701ES with the same performance) and two Sony SL F1 VTRs, here are some observations on straight copying between the storage recorders via the single processor. This can be in a digit-for-digit mode, with no quality loss or possibility of altering the signal, or in analogue mode where I'm blowed if I can hear any signal change, but if desired the signal can be treated in this mode in many possible ways or 'overdubbed' as discussed in the January issue.

Figure 1 shows the elements of interconnection between the items. The initiated, with the equipment, will of course get more from studying it than those remote from the delights and attributes of the F1 system. (For reader's information he or she may like to know that the Managing Director of an excellent world-famous analogue disc playing system has described the results obtainable with the F1 as 'execrable'! The rest of us ask 'is the writing on the wall?').

Using the Copy Out socket, with the F1 copy switch to ON, digit-for-digit copying is available with an error-corrected signal out of the processor. Some might think that just coupling the two VTRs together will do. However, this does nothing to correct any tape dropout-provoked bit stream corruption, so the alternative is preferred. Later, I will describe the modus operandi of silently joining two consecutive transfers.

With the F1 copy switch at OFF, the Copy Out socket receives a parallel digital output signal to the normal record VTR output. This allows parallel recording in normal recording set-ups. In copying though, the record VTR will get a digital signal after D/A and A/D processing with any type of analogue alterations (fades, level changes, EQ, reverb, etc.) that are desired.

The PAL SL F1 VTRs have a control track on which a 25Hz signal is recorded. Obviously, as VTRs are used the digital signal bit stream is stored as 'video picture frames' would otherwise be. In Pause mode the tape is stopped 'at a frame'. With skilled use of Pause controls and intelligent anticipation, silent joins can be made between dubbed items with reasonably close 'butting'. The procedure is as follows:

(a) Copy the first item and go past the intended joining point. To reliably obtain silent joins it seems important to have recorded on the tape beforehand.

(b) Line up the record machine at the point of intended 'butt' join.

(c) Set up source machine before the start of the new dub, say 5 seconds or more beforehand.

There are a number of matters arising from this procedure. You will notice the servo of the record machine settle to the information coming from the source machine; the 5 seconds or so should be enough for this to be right at the joining point.

The Sony SL F1 VTRs follow an interesting procedure on being placed into Pause/Record mode. The tape is run back a number of 'frames', then on releasing Pause, the recording is started 3 frames short of its original point. Although the erase head is some 'distance' down the tape, new information is satisfactorily recorded onto the tape even though the erase head is not present (ie. operational).

If the butt joins are done 'in ambience' with skill, half second accuracy can be obtained. On playing back the join, the mute will light but an audibly silent join is produced. Interestingly, if the tape is itself digitally copied, the muting no longer occurs, indicating a 'cleaning up' of the edit.

Ah, I've mentioned edit. On this subject I can only advise readers to stand by 'til the APRS Exhibition in June 84, and see what developments are revealed (such as a control system for precision butt joining or editing with the F1 system).

It can be a real devil to continuously unplug and replug at the back of the F1 when different modes are needed. Additionally, it is possible to get a 'howl-round', seriously overloading the electronics if the inappropriate connection is made. A die-cast metal box with gold contact toggle switches and phono connectors can easily be made up to allow the various modes to be selected. This, with the absence of or at best the minimum chance of a howl-round.

Some additional words on the analogue overdubbing covered in January. There are two basic ways of operating. One can replay and record in one direction only, or alternatively perform one traverse in one direction with the next in the opposite direction. It's all a matter of which operating system appeals most to you, how many tapes one wants to tie up with each overlay, and how likely one is to erase 'the master'.

I shall not outline in detail all the combinations possible, but just mention that I prefer to use two tapes for the building up of takes, recording in one direction only and then place the final take onto the master by digital copying.

However, Figure 2 gives an idea of what can be devised by way of a switch box, to allow copying in either tape direction.

Finally, I would like on behalf of HSR to challenge F1 system users to let us look at their own designs. As a starting point, I would suggest a single rotary multi-wafer switch with the various facilities (without howlround on misoperation) at each switch point. Who will accept the challenge? It's not just a paper exercise - the design must have been built and proved to work, as we may want to have the opportunity to try it to confirm your claims. 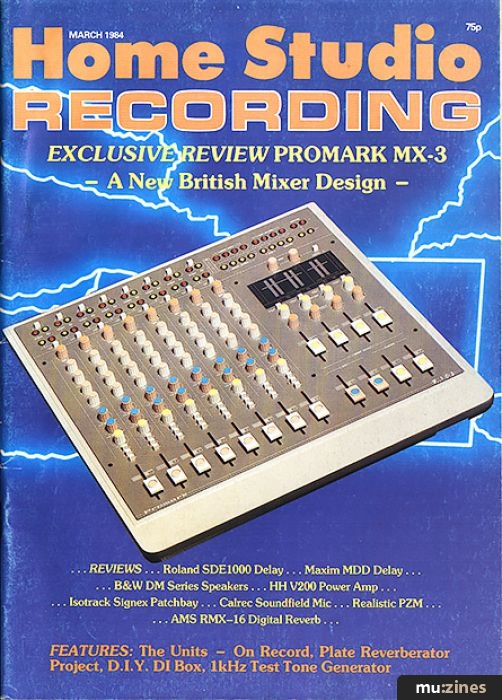