UK Electronica is the first British one day synthesiser music festival, to be held at the Woughton Campus Centre in Milton Keynes on Saturday, September 3rd. It's being organised by Inkeys cassette magazine with the assistance of Lotus Records, Pulse Electronic Music Klub, Mirage Magazine, Neumusik/YHR tapes, Flowmotion and many other publications, studios and musicians throughout the UK and the continent. The event will be aimed primarily at the listener, but in addition to concerts there will be demonstrations of musical equipment, slide, video and film shows, laser displays and appearances by celebrities in the electronic music field.


Daytime concerts are scheduled by Chris and Cosey (ex-Throbbing Gristle, now with their own Creative Technology Institute) Ian Boddy (Mirage tapes), Paul Nagle (YHR tapes) and Ron Berry (Inkeys 2). There'll also be displays of recording and musical equipment by jazz composer Neil Ardley, by alpha Syntauri expert Terry Lloyd of Computer Music Studios, and by many other manufacturers and musicians. Lotus Records will be moving their entire stock down for the day and along with YHR and Mirage selling LP's, cassettes, T-shirts, posters and badges. Slide and video shows will contain material relating to many of the top synthesiser music bands.


Many celebrities from the electronic music field have been invited, and it should be possible to chat with recording artists from the worlds of TV and films as well as cassette and vinyl. E&MM hope to put in an appearance during the day, and the leisure centre's catering facilities including a bar will be open. Possible last-minute additions include Belgian band Pythagoras and Californian composer of 'The Pillory', Jasun Martz.


The event will culminate with an evening concert starring IC recording artist Robert Schroder, whose popular albums 'Harmonic Ascendent', 'Floating Music', 'Mosaique' and 'Galaxy Cygnus A' will probably be joined by the superb 'Paradise' by that time. In support will be Mark Jenkins (Inkeys 3) with lasers by Laser Systems of Gwent, and Mark Shreeve with brother Julian. Mark Shreeve is currently working on 'Assassin', the follow-up to the top-selling Thoughts of War' album on Uniton.

Milton Keynes itself is easily accessible by rail or from Junction 14 of the M1 motorway. Woughton Campus is within walking distance of the railway station, and a guide will be included with all ticket sales. Tickets for the whole event are available at the reduced rate of £5 until 23rd July from Inkeys, (Contact Details). All applications received after that date will be charged at the full rate of £6. Cheques and postal orders should be made payable to Inkeys, and a stamped addressed envelope must be enclosed. Ticket numbers are strictly limited, particularly for the Schroder concert, so immediate application is advisable. Individual ticket prices for the daytime and evening events are available for an sae, although since Milton Keynes is on the main London Euston line very late trains are available after the event.

Inkeys 4 is now available, featuring Klaus Schulze, Andreas Grosser, Jean-Phillipe Rykiel, Rudiger Lorenz and much more. It is hoped that Inkeys 5 (available 1st August, with the deadline for contributions as 15th July) will feature musicfrom all those taking part in UK Electronica, and in addition there'll be pieces from Don Robertson, Steve Joliffe, Zanov and a single from Trans-X. Price £1.99 from (Contact Details). 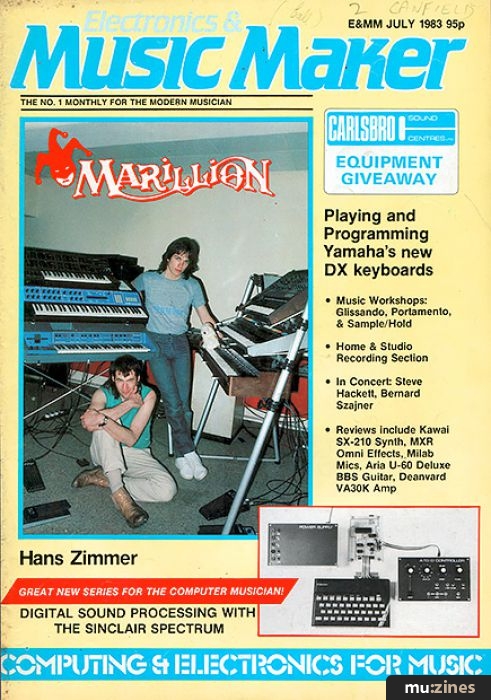