Oberheim is a familiar name to keyboard players and the company is justly recognised for its pioneering work with the first truly polyphonic synthesiser in the four and eight voice Oberheim Synth.

By truly polyphonic, I mean not only more than one note but independent sounds on each note. Interesting that not even with today's technology has anyone produced an analogue synthesiser keyboard with this facility.

When the Prophet Five came out, even though it was a totally different instrument (one set of controls for all five voices) to the four and eight voice, it must have come as quite a blow to Oberheim.

The success of the Prophet with its large memory system and ease of working led Oberheim to bring out the OBX and subsequently the OBX-a, an updated version on review here. The major revision is that it now boasts 120 memories instead of 32. The updated Prophet reviewed elsewhere is also increased to 120 but from an original memory facility of 40.

It was useful being able to compare both of them in quick succession because along with the Roland Jupiter 8, these instruments are aimed very much at the same buyer.

Down to the nitty gritty of the knobs and switches. The OBX-a is a homogenous machine where the controls are similar to a monophonic synth but refer to all four, six or eight voices depending on the model. This review model was a six voice instrument. There are two oscillators per voice, with choices of square and/or sawtooth waves, oscillator one's frequency knob goes up in octave increments, oscillator two in semitones, and one knob controls both oscillators' pulse width.

There are the usual two envelope generators with attack, decay, sustain and release configurations for the filter sweep and loudness. The modulation section is very straightforward. The low frequency oscillator (LFO) has a rate knob and a choice of either sine, square or random wave forms. These can be routed to the frequency of osc 1, osc 2 and the filter with the depth controllable and the pulse width of both oscillators, also with controllable depth.

A section headed "control" has the knobs for portamento and osc 2 detune, and also a switch to put the instrument into unison. A manual section contains the master volume and tuning details and a balance control to set the levels of the two halves of the keyboard. The OBX-a can be split for different sounds at each end, or made to overlay two memory selections.

There are two further switches — hold and chord. Pressing the first allows a note or chord to be sustained indefinitely when your fingers are off the keys, the second switch remembers a chord shape that you've played and reproduces it in a new key each time you press the appropriate single note.

When soloing I found this to be an exhilarating device, but if your song chord sequence is slightly more than simple you can run into harmony difficulties — still, who cares? It sounds great. 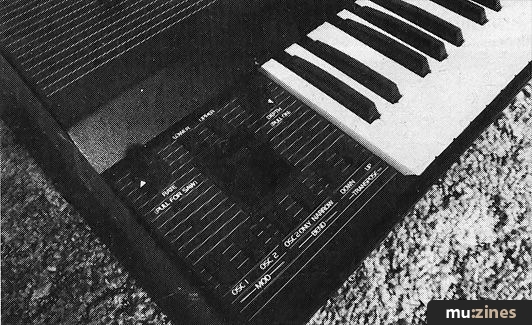 The keyboard is five octave C-to-C and to the left is a useful performance control section based around two levers — one for modulation, one for pitch band. The bend can be wide (an octave) or narrow (a tone), and switchable to osc 2 only if required.

All this section overrides the memories and is really excellent. I'm used to using Minimoog wheels, but I took to the levers very easily. There are a couple of real advantages here that the Prophet doesn't have — quick, easy transpose override without messing up your programmed front panel settings, and also having an LFO for performance controls, separate from the front panel LFO which probably you will have used as an integral part of your programmed sound in the memory bank.

The splits and layers are all programmable. The 120-space memory (which has cassette dumping facilities) needed a bit of puzzling over at first. How does one get 120 programmes from four banks (A, B, C and D) and eight positions within them?

Answer: the secret is to press combinations of the bank buttons, 15 in all. To save you working them out that's A, B, C, D then AB, AC, AD, BC, BD, CD then ABC, ABD, ACD, BCD and finally ABCD.

You could put a sound in this memory bank and spend another two days trying to find it! But the advantage over the Prophet's system is that you can still make instant changes.

The rear panel has footpedal inputs and a computer socket for Oberheim's polyphonic sequencer. Two criticisms: the tricky programmer and, more seriously, the lack of balance mixing controls for the two oscillators and noise into the filter section.

I should point out that the review instrument I was given had some serious tuning faults and the oscillators kept drifting. When the modulation was switched to the VCOs at the performance controls to the left of the keyboard there was a disconcerting and unintended jump in pitch. The instrument was not new, so I sincerely hope this is an isolated fault.

However the sound of the OBX-a was beautiful — rich and smooth, heavy and powerful, as we've come to expect of Oberheim. 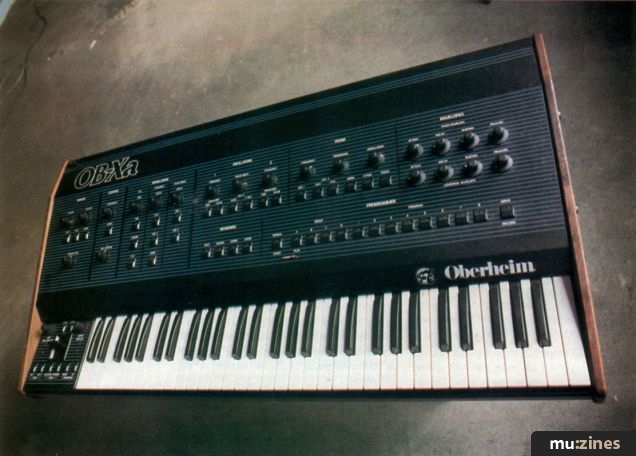 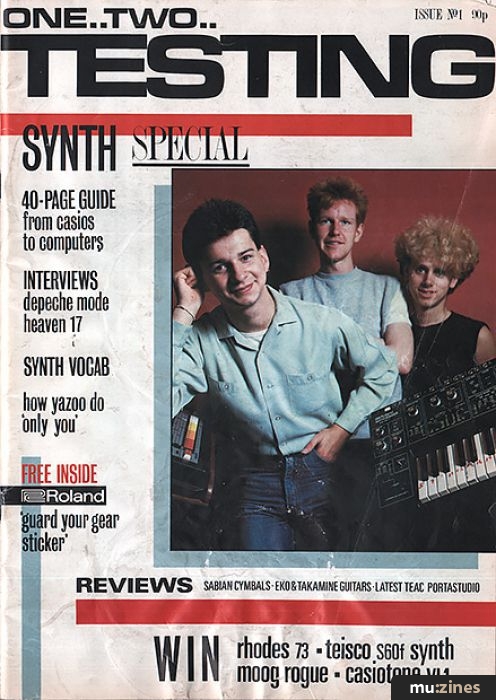