Let me first tell you the problems, doctor. Guitar synths have to analyse the pitch of each string (a frequency), and convert it to a MIDI signal (a voltage) that synthesisers can understand. Major snags are (a) the harmonics which abound in guitars, masking the true pitch and confusing the analyser, (b) the converter which waits for one complete cycle of the string's waveform before deciding on the pitch. The former can produce glitches and bad tracking, while the latter may introduce delays, especially on bass notes (longer waveforms so a greater wait).

Shadow have made strides in solving both these. The ready set-up sample I tried felt... assured. Hiccups were rare, only unusual harmonics and scrabbling up and down the strings seeming to upset it. New notes were picked up cleanly and quickly, and I had less adjusting of the appalling guitar technique to do than on previous g-synths passing this way. You still can't play like a gibbon, though.

Your cash gets you a bridge and lock-mount tremolo unit to drop into your own guitar (Strats are the common option, there's a little soldering), plus a rack mounting MIDI interface and controller. Guitar synth makers generally place a Hex (six way) pickup hard against the bridge to cut down on distracting harmonics. The Shadow's actually forms the tip of the saddles, and as a bonus include a ceramic pickup, much like a bug on an acoustic guitar. This gets its own volume control and gives an entirely separate acousticky sound to your guitar. Three noises from one instrument.

The Shadow is touch sensitive passing on some of your dynamics to the connected synth. It can't possibly recreate the whole whisper-to-Townshend range, but each string can be individually adjusted for tailored response - a convenient match for your picking or strumming style.

The rack unit is a friendly beast. It can tell you your guitar's in tune, control 16 MIDI units at once, and feed each string its own MIDI channel. Every string can also be transposed MIDI-wise, up or down by a maximum of three octaves, and you can store one such open-tuning in memory.

On the floor lives the foot controller - hold, chain, sequencer. Hold brings in a predetermined MIDI channel, so you could sustain one chord on, say, a violin patch, 'holding' it while soloing on another synth on another channel. Chain lets you pre-program synth voice changes then step through them. Each of the 16 MIDI channels will go to a different patch at once.

The sequencer is less sophisticated - a musical notebook that can remember, say, a couple of minutes of chord changes, allowing you to play over them later. You're limited to the polyphony of the connected synth, by the way, not the six strings of the guitar. Sequences are stored when the power goes off.

The sound still relies on what synths you connect, and how many, and there's still some adjustment of your guitar technique to make - the analysis is so 'correct' that a sloppy slide between frets can produce three notes instead of two. You thought you damped the one in the middle, but the Shadow picked it up. Also on the lowest strings there's still a fractional delay between pluck and noise, though no more than a very brisk ADT. Most importantly, I didn't spend half my playing time panicking about hideous glitches burping from the speakers. Confidence is a good thing.

Out Of the Shadows - Shadow MIDI Guitar
(EMM Jul 86) 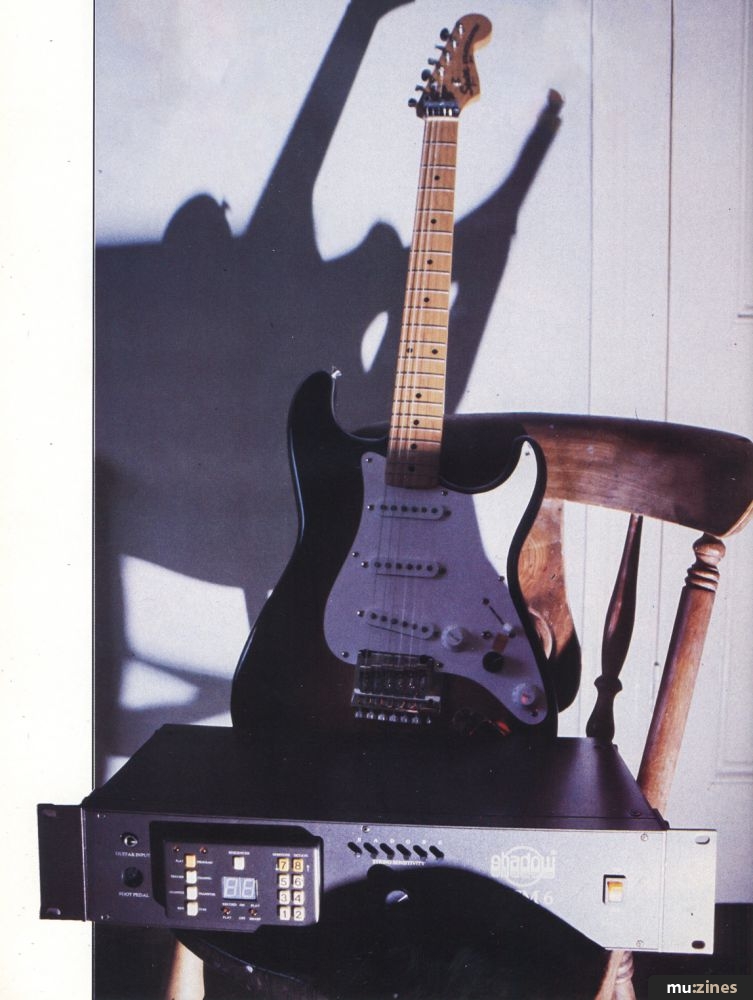