Roland's Juno 60 is the expected follow up to their popular Juno 6, adding a bank of programmable memories to the highly suggestive blank panel which was the cause of so much speculation after the release of the earlier model. To say that Roland have done exactly as predicted is no criticism - the Juno 60 performs just as you might imagine, and costs about the same (around £300 more than the Juno 6).

Since no major changes have been made to the voicing, the 60 can sound effectively the same as the 6, which was comprehensively reviewed in E&MM July '82 and included on Demo cassette No. 7. The factory presets present at first switch-on represent a good selection, but can all be altered to suit individual requirements.

The only front panel changes are to the HPF (now is four settings of 0, 350 Hz, 1kHz and 5 kHz rather than on a continuous scale) and the VCA (now with a sliding volume control as one of the programmable parameters). The chorus and octave transpose controls are also programmable.

Some very realistic sounds are possible, such as those in Bank 1 of the memory. There are 56 memories altogether, in 7 banks selected by 5 grey tablet buttons (press 1 and 5 for bank 6, or 2 and 5 for bank 7) where each bank contains 8 settings (selected by 8 white tablet buttons). Bank 1 contains useful string, brass and key-click organ sounds which are quite likely to be retained by many musicians; Bank 2 contains pianos and harpsichords, Bank 3 funk sounds and clavinets, Bank 4 traditional instrument sounds such as flute, trumpet and an excellent trombone and cor anglais.

Bank 5 has a selection of wah and plucked synth sounds, which are likely to be changed to suit personal taste. Bank 6 has more twangy and slowly decaying synth sounds, and Bank 7 has some excellent special effects including raindrops, wind, surf, glass and whistles.

An optional footswitch can step through the memories on any one bank, the setting being indicated on a two digit LED display. This is a useful facility for mid-number setting changes when you don't have a spare hand. The memories can all be overwritten, the control panel being in constant edit mode so that as soon as any control is moved it jumps to its manual rather than programmed setting.

The memory contents can be dumped onto cassette in about 30 seconds, with an 'Er' message being given on the LED display if levels are too high or too low. Reloading is equally simple, and so a library of settings (including the factory presets if you don't want to leave them in the memory) can easily be built up and called upon between sets.

In addition to VCF control, Arpeggiator Clock In and so on, the back panel now has a DCB (Digital Communication Bus) socket which can interface with an MC4 Microcomposer via an OP-8 interface. The power of this combination can be imagined, and the Juno 60 is obviously going to be a big seller over the next few months.

Roland's other new product is the SH-101, which is in many ways an update of their SH-09 with the addition of several unique features.

Although the specification resembles that of the SH-09, the physical presentation is quite different. The body is metallic grey plastic, extremely shallow and slightly wedge-shaped, with the back panel controls lifted over onto a recessed ridge on top of the instrument. The keyboard is still 2½ octaves, with a left to right pitch bend lever next to it together with other performance controls. Almost all other controls are sliders or slide switches, with the exception of VCO footage, LFO waveform, portamento amount, tune and volume.

The single oscillator gives the usual selection of powerful pulse width modulated bass and piercing high frequency sounds, and there's now a single memory built-in digital sequencer permanently linked to it. Programming is from the keyboard, and spaces, alternative note lengths and key transpositions can easily be obtained.

The optional MSG-1 modulation grip connects to the side of the keyboard and gives control over pitch bend or filter opening (in an upward direction only) by a sprung finger wheel, and modulation control by a thumb pushbutton. This introduces vibrato or trill with a very slight built-in delay to compensate for the fact that any such modulation always goes to the full depth as set.

The same system applies to the pitch bend lever, which now has a microswitch activated by a slight forward pressure to introduce modulation. With all these modulation options the synth becomes very expressive: a guitar-style strap is included, and with the MSG-1 the whole package becomes capable of enormous versatility and portability. We can expect to see the SH-101 turning up in very large numbers in bands and home studios in the near future.


Korg have updated their popular all purpose keyboard to give even greater versatility and sound quality. The basic sections of the Trident are strings, brass, and programmable polysynth, and there's also a powerful built-in flanger which can be used to treat any of these sections.

The polysynth now has two VCO's for each of its eight voices with the facility to detune each pair for a much thicker sound. The VCF is now a 24dB/octave type, with five options relating to keyboard tracking (0, 25%, 50%, 100% and 150%) and there are two independent ADSR envelope generators for VCA and VCF. The VCA also has a programmable attenuator for +10dB or -10dB.

The three preset sounds (pianos and clavinet) have been removed in favour of an expanded memory section, now 32 memories in four banks of eight rather than 16 on the old Trident. Memories can be dumped onto tape in around seven seconds and the cassette supplied contains the 32 factory memories present at first switch-on and another 32 sounds.

Programme saving is now much more flexible, with the facility of partial loading to any degree. During loading the LED's associated with the memory selectors indicate the order of loading, and Verify and Error/Cancel facilities exist to ensure reliable loading.

All the controls are in constant edit mode to facilitate easy updating of programmes. There are a variety of input and output sockets for switches and footpedals on the back panel; these help to produce a highly expressive and powerful instrument which will now be found to be capable of providing every basic facility for the multi-keyboard player. 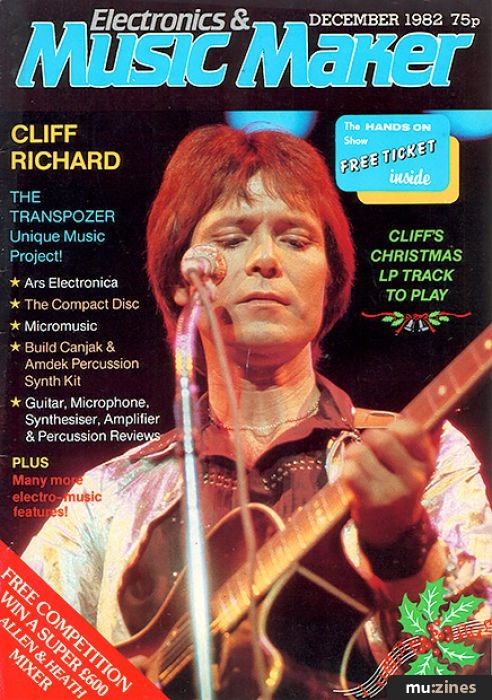