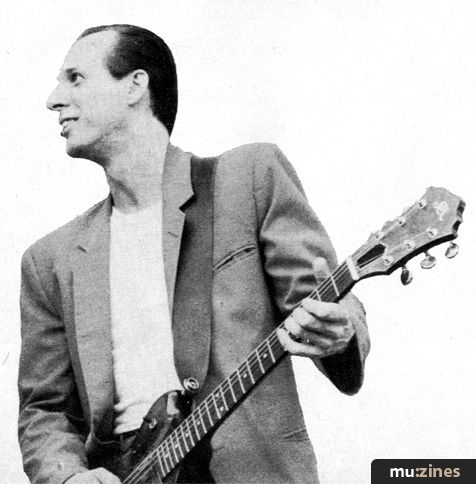 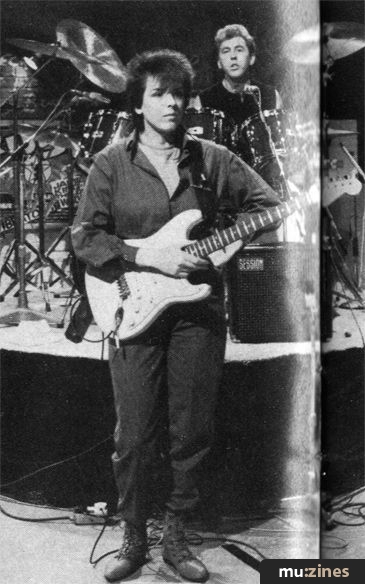 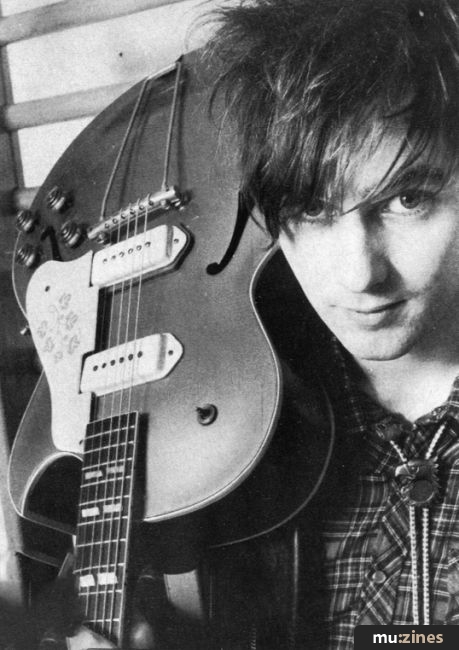 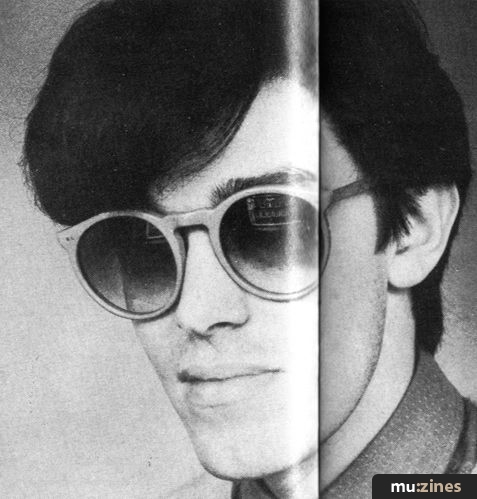 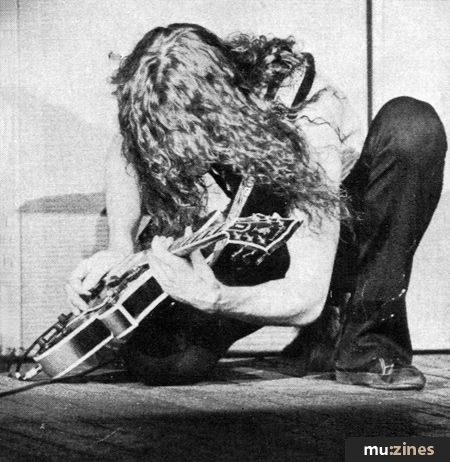 "This was the first record I ever bought, a very simple pop guitar instrumental by Duane Eddy, and the record which inspired me to start playing guitar. I used to make cardboard Gretsch guitars – which was the guitar Duane Eddy used – and practice in front of my mirror. For a long time after this record I would only buy instrumentals." BN

"I was lent this Django Reinhardt record by my English teacher, when he realised I was interested in playing guitar, and it sparked my first interest in jazz. The playing is so fast, a blur of speed, but still very melodic and inventive. Also it was an acoustic guitar, but played in a very harsh and cutting way." BN

"This has been the inspiration for many a great guitarist. Structured craziness." RF

CAUSE WE'VE ENDED AS LOVERS

"I like Beck's early bluesy playing, for example on the 'Truth' album (1968), but 'Blow By Blow' in 1975 was the first time I heard jazz and rock mixed in a way which I didn't find boring, apart from Hendrix of course. On this track Beck's playing is really emotional and unorthodox and yet also controlled and measured. I think he'd been listening to Roy Buchanan before he recorded this one." DC

"Robert Quine from Richard Hell & The Voidiods ('Blank Generation') was a big influence, and one of the guitarists that I think plays just as good as him is Malcolm Ross from Josef K. On this song Malcolm uses lots of droning strings and really strange chords. Malcolm always plays guitar like a kid with a new toy. Great dexterity." RF

"I like the humour in this – Albert King complaining about his girlfriend's cold feet in bed. It's a tongue-in-cheek guitar rap with some very witty blues playing. A cool solo and some great high notes." BN

"Great overall feel, the essence of what good rock'n'roll should be. The feedback use, the grinding string-against-the-fret intro, culminating in feedback. Just his sass. 'Comin' to git ya, baby.' What a bastard he was. I loved him." TN

"This has got a really good understated solo bit in it. I like unusual guitar playing – I don't really care whether a guitarist can play well in a technical sense, so long as he can introduce original sounds and interesting ideas. I stood in for Hugh Cornwell when he'd been put in jail, and this was one of the songs I had to learn. So I got right inside the guitar part and realised the way he'd arranged it all was very clever." RS

"Again, I had to learn this one, when I stepped into the Banshees after John McGeogh left. This is really harsh funk in a weird way – clever choppy chords. There's no real form to it as such, but some interesting sequences." RS

"'Truth' was the definitive rock'n'roll guitar album. Pure soul, so much spirit in every note he played. A classic Les Paul tone." TN

"This is where Gibbons stole my 'Stranglehold' lick. But he did a good job on it. He's got some of the greatest soul guitar playing you'll ever hear by any white man anywhere, anytime. When it comes time to spank the plank, you can take Billy to the bank." TN

"This was the first time I'd heard backwards recording, when I was still a drummer, and it came to influence my guitar playing very much. The Beatles, for me, were responsible for so many memorable guitar hooks, approaches and chord changes – a very big part of my education. One of the most interesting things about this track is that it isn't just a unique sound, it's well incorporated into a pretty good pop song too." AB

"I still wasn't a guitarist when I first heard this, but it had such interesting breaks: humorous as well as melodic, flashy, fast... it summarised a lot of Beck's great bag of tricks, all thrown into one song. Difficult to choose just one from someone who's influenced me so much: this is a showcase. There was no other guitarist playing this way at the time." AB

"Great licks here from Harvey Mandel. Some of the first backwards guitar. Boy this is a sexy fucking song. It's got a feedback, backwards guitar solo that's just bluesy, soulful as hell and I just wished it would last forever – but it's a short song." TN

LIGHT UP THE SKY

"When I first listened to this Van Halen track I thought, 'Oh yes, fairly standard heavy metal chords here.' But then the guitar drops down to the slight melodic rhythm part in complete contrast to the solo which suddenly bursts out of the speakers – all feedback and tremolo arm, but really short. I put this on over and over again – it's so exhilarating." DC

"I love Pat Metheny's playing on this track. His style is always jazzy, fluid and very melodic, but his playing is more pushy than usual on the 'Lone Jack' theme. He soars off into a solo which is really exciting and quite unusual." DC

"Tom Verlaine is one of the few people who can play for five minutes and really build within that time. It sounds as if he's improvising all the time, but there's a really strong structure. He's a great guitarist." RF

"This is a track from a French import album of African music called 'Four Stars', featuring four guitarists. 'Mayi' is credited to Wuta-May, but throughout the album there are at least three or four guitar parts on each track. I love the way the rhythms interweave, and I often put this on in the mornings 'cause it always makes me feel happy." DC

MAY THIS BE LOVE

"This was one of the first indications that Hendrix had a more lyrical, tender side to his playing, and was a forerunner to things like 'Little Wing' and 'Angel'. He does a one-string slightly oriental solo at the end. He was a great influence." BN

"I think this was Hank Marvin borrowing some ideas from an old Santo & Johnny record called 'Sleepwalk'. 'Midnight' had a ghostly guitar sound, a very eerie feel that I thought was quite out of this world." BN

"I could have chosen 20 of my favourite guitar passages and they would all have been by Jimi Hendrix. He was the only guitarist that I really thought was wonderful. He was part of my childhood, so his playing is a part of me. Even now when I hear Hendrix, there's a quality about it that nobody else has ever quite achieved. It sounds so effortless and everything sounds as it should be." RS

"This probably influenced me to take up guitar seriously, it was the first Jimi Hendrix song I heard and the first I sat down and figured out note for note from the record. I studied like mad from then on, picking up things as closely as possible from his records – that was the whole base of my education. This has a lot of unique effects for the time: the dissonant intro, the varispeed tape effects at the end, the harmonic soloing – still quite hard to do – and the sound of the guitar, which I believe was going through a Foxtone. And I vote it to have the best rock chord award, an E-ish chord that starts the melody and sits under the singing." AB

REELIN' IN THE YEARS

"Steely Dan was a haven for the best studio guitarists, and this has the most memorable playing of the lot for me. It has great signature lines, in harmony at one point, and there are several solos that have a lot of finesse and fluidity. It's a fairly straightforward sound – a little grungy even – but it's so unaffected. This to me demonstrates the best of what a great studio musician, in this instance Elliot Randall, can add to someone's record." AB

"I didn't know which Hendrix track to choose, but I've always felt that Hendrix's best performances were live, and this version of the American national anthem is amazing. The sounds he got out of that Strat! With the background of the Vietnam war, it was so cynical and emotional." DC

STOMPING AT THE SAVOY

"Charlie Christian was a great, innovative guitarist who died when he was only 23. This track sounds a bit dated at first, but as soon as Christian starts soloing, the whole thing moves forward ten years. He takes round after round, injecting fresh ideas every time. He really swings. If only he'd lived longer." DC

"I'm gonna have to pick this song of mine because the solo is just too earth-shattering to be ignored. I listen to myself and I go 'Who is this guy?' The speed, the dexterity, the weird note configurations – you won't find these anywhere else. I'm constantly moved by my playing." TN

"This is the guitar sound I want to use on the next Aztec Camera album. A great 1960s fuzzbox sound, very noisy. I'm not sure if it's Lou Reed or Sterling Morrison." RF

"Hypnotic. New Order's guitarist Bernard Albert often uses a similar effect – a kind of drone that builds up and up around a repetitive motif. Noise and sound rather than defined sequences of notes. When I first heard this song by Velvet Underground, it was a very original sound." RS

"Hearing 'White Riot' for the first time threw a whole new slant on playing the guitar. It had the same insanity and freshness about it as the early Hendrix records. It had a complete disregard for technical merit, but sounded extremely vibrant, very exciting. I decided quite early on that I didn't want to be a lead guitarist, it involves far too much practicing, and hearing the Clash confirmed my interest in the guitar as a rhythmic instrument." RS

"A side of Frank's playing you don't hear very often, not typical, but a lovely chord progression, and I love the feedback and the overtones that the Stratocaster's giving out. It has just the right amount of space — the notes hold out for a long time, and there aren't many of them. Usually Frank's using fast lines and lots of note dusters. This is different. When I began working with Frank this was on his current album, so I listened to it to get more familiar with what he was doing then, and I just loved this track." AB 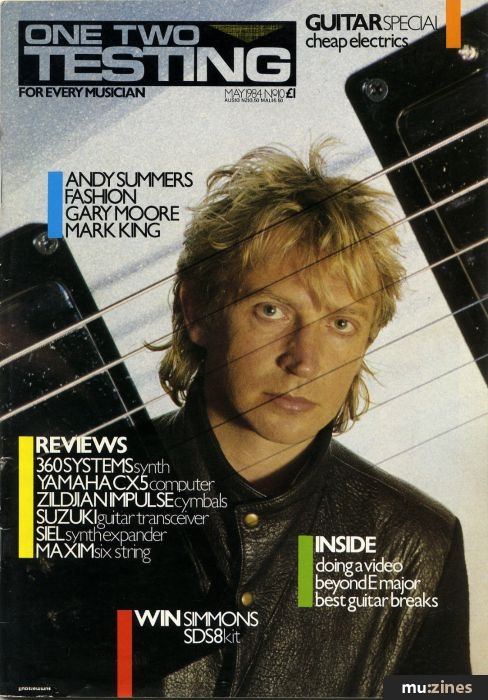