Some people record all their MIDI instruments to tape, while others sync up their sequencer and run all the sequenced parts 'live' into the mix. Paul White examines the pros and cons of both approaches.

Most of us were brought up with tape recorders as our main recording medium. Multitrack tape has served us well for over three decades, and the concept of recording different chunks of music or audio onto adjacent tracks for later mixing has become firmly established as the 'normal' way to work. Even now that we have hard-disk systems running on computers, and stand-alone hard disk recording units, manufacturers still design control systems in such a way that the main functions appear to behave like a conventional multitrack tape machine.

With conventional multitrack tape, where the number of available tracks is limited, a conflict arises between the desire to keep everything separate until the last minute and the physical impracticality of having as many tape tracks as you have sound sources. This situation has become particularly acute now that virtually every studio includes a rack of MIDI sound generating equipment simply bristling with separate outputs, each vying for its own tape track.

On the face of it, the introduction of low cost MIDI-to-tape synchronisation should have solved the problem because it eliminates the need ever to record MIDI-driven instruments to multitrack at all. Now the 'virtual' MIDI tracks can be mixed with the off-tape signals and committed directly to DAT, or whatever the mastering medium is. The only proviso is that you need a mixer with enough inputs. So why is it that many professional engineers and producers still insist on recording their sequenced parts to tape? It can't simply be that they have tracks to burn, so what's the attraction? Time to look at the pros and cons.

• FEWER TAPE TRACKS: Running the virtual MIDI tracks directly into the mix is attractive because it means that fewer tape tracks are required, yet all the sounds may be mixed and treated separately. Using SMPTE or Smart FSK sync means that the sequencer locks to the tape machine very quickly, regardless of where in the song the tape is started.

• QUALITY CONTROL: Virtual tracks avoid one generation of quality loss — all tape recorders cause some deterioration in sound quality, even the best digital models.

• MIDI AUTOMATION: Virtual tracks offer the greatest flexibility when it comes to the final mix because any of the sounds can be replaced at the last moment. Furthermore, real-time MIDI control from a sequencer means that a great deal of automation can be used in a mix: synth output levels can be varied over MIDI, sound parameters may be varied in real time and MIDI effects unit parameters may also be controlled.

• MORE TRACKS: If everything is recorded to tape, then there is no need to devote a track to time code. However, as will be seen later, it may not be wise to dispense with time code entirely.

• REPEATABILITY: When a mix is undertaken using virtual tracks, there are many variables that may be impossible to duplicate exactly if a remix becomes necessary. Sounds may be edited or moved in the interim period or internal effects settings changed. There may also be one-off MIDI hookups that nobody bothered to write down, or you may change a sequencer part yet forget to save the change. You might even forget to back up your work and then find the vital floppy has been eaten by the dog! At the very least, once something is on tape, you know you will be starting from exactly the same point every time you commence work.

• COMMITMENT: While virtual tracks offer limitless opportunity for change, right up to the minute of the final mix, many professionals cite this as the very reason they don't like it. It seems they prefer the commitment of having something on tape and then moving on — if every option remains open right up to the last minute, you can waste hours changing things and end up with a worse result.

• RELIABILITY: Sequencers are generally quite reliable, but when working sync'd to tape you can end up with occasional stuck notes that defy explanation, which is singularly peeving when you're near the end of an otherwise perfect mix. You're also in trouble if the sync code on tape drops out or, perish the thought, if someone accidentally erases part of it.

• THE ANALOGUE SOUND: Some people record to analogue tape simply because they like what tape does to the sound. A little analogue tape compression combined with minuscule amounts of wow and flutter can warm up a cold digital synth sound quite considerably.

• POLYPHONY: If you're using a one of your multitimbral modules to produce most of the sounds in a song, you might well find it runs out of polyphony and you end up with missing or truncated notes. You can get around this if you record to tape, as you can mute one or two of the busier parts on the sequencer before recording, then run through a second time after swapping the mute status, recording the remaining parts on another tape track.

• EDITING: If you're one of those people who loves chopping up multitrack tape and then splicing the bits back together in a different order, the fact that everything is recorded on tape makes this a very straightforward process. However, the advent of hard-disk editing systems combined with the rising costs of multitrack analogue tape has probably reduced both the need and the desire to do this.

Clearly both approaches have their strong points, and most people tend to adopt a mixture of the two methods.

The simplest example of this is where one track is dedicated to time code, all the MIDI instruments run into the mix as virtual tracks using a sequencer, but a stereo mix of just the MIDI parts plus their effects is also recorded onto two of the tape tracks. This way, the 'real' parts recorded onto tape can be remixed or updated without having to set up the whole MIDI system and any associated effects units. In the event that a major change does become necessary, then at least the option of sync'ing up the sequencer and starting from the original virtual tracks remains open.

Of course, working in this way means that you either leave the stereo mix of MIDI instruments exactly as you recorded it or you go back to the sequencer and set the whole thing up again. The only non-destructive possibility is to sync up the sequencer and maybe add one or two new parts over the top of what you already have.

A rather more flexible approach is to break down the MIDI instruments into logical subgroups and record these onto pairs of tape tracks. The more tape tracks you have, the more you'll be able to break the MIDI parts down into sections, but a sensible split might be stereo drums/percussion; stereo keyboard pads; mono lead line and mono basslines. This leaves a reasonable degree of scope for rebalancing, and if you do want to change a sound or add a new part, then you only have to worry about the instruments in the affected subgroup — the rest can be left as they are.

Ultimately, how you decide to work depends on how many tape tracks you have at your disposal and on which method or combination of methods makes you feel most comfortable. No one method alone has all the answers, but knowing the strengths and weaknesses of each approach, you'll be better placed to formulate your own optimum work strategy.

Shape Of Things To Come 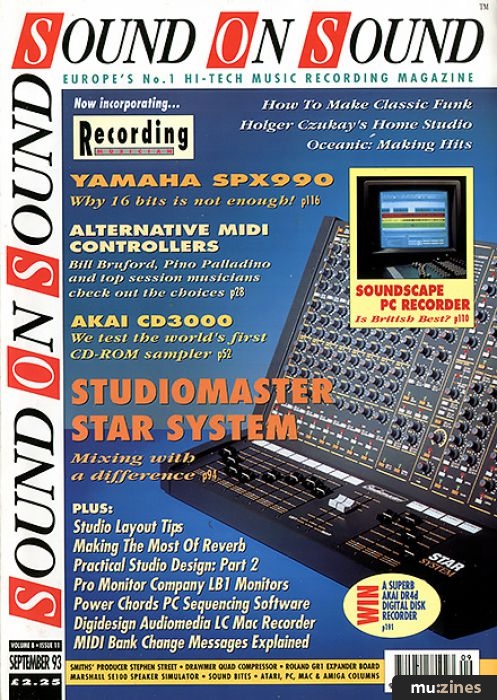 > Shape Of Things To Come