The patently mad Andy Honeybone rejects the advances of one attractive model and opts instead for an explanation of the synthesis methods known as FM (Yamaha) and Fourier (Fairlight).

"No," said Len with increasing impatience, "I can't give you a licence to sell ties down the market." "But this is an Off-licence" retorted the customer who was, at a guess, a newcomer to matters legal.

It certainly was an Off-licence and Len was proud of stocking the wines of the world in an area of London where most folk are interested in the beers of Wandsworth. Len had to explain that the granting of street trading licences was outside the domain of a victualler such as he — it did not come within his sphere of influence.

A somewhat tangential introduction to the topic of digital sound synthesis you may think, but decidedly more gentle than ploughing in with: "Convolution of two signals in the time domain is equivalent to multiplication in the frequency domain".

Folded input time functions may mean something to Dr Who but if like me you didn't give your total attention during maths lessons, the sight of large Greek letters and imaginary numbers will induce rapid page-turning.

Unfortunately, digital synthesis is concerned not only with numbers but also the physics of sound. If like me you didn't give your total attention... etc, etc, etc.

Perhaps a good way to start this non-mathematical tour is by defining the problem: to create real-time, musical sound(s) without using natural acoustic methods or electronic oscillators (VCOs).

The inclusion of the phrase "real-time" indicates that the sound must be produced in immediate response to a key depression, not after the computer has thought about it for a while.

Defining what is just noise and what's musical sound isn't so easy, but a note must have a pitch and this implies it has a periodic (repeating) waveform. In the previous article on sampling instruments, the idea of wave tables was introduced. These are nothing more than a chunk of computer memory where each byte holds a value equal to the amplitude of one slice of a sampled waveform.

By reading each value out, in turn, to a digital-to-analogue converter, the waveform is brought to life. "Looping" the table gives a continuous tone. The difference between a sampling instrument and a digital synthesiser is in the way that the wave table is filled — the first analyses natural sounds; the second generates the values by computation.

A sine wave is easily described in maths. Therefore, fortunately, the computer can be made to fill a wave table with samples corresponding to a sine wave merely by manipulating a formula. Once filled, the wave table is "read out" and a sine wave appears at the output of the digital-to-analogue converter.

There are two ways by which the pitch of this tone may be altered and the first involves changing the sample readout rate giving higher frequencies for faster readouts. But this method is only applicable where each voice has its own digital-to-analogue converter.

The second method leaves the readout rate steady, but alters the time taken to cycle around the wave table. It does this by skipping entries for high notes and reading entries more than once for low notes. Although this distorts the waveform, the technique is found to be acceptable and it allows multiple voices to be processed through one digital-to-analogue converter.

All this is very well except that sine waves are rather boring to listen to and you and I would like some way of altering the sound to our preference. The most obvious (and instantly dismissible) answer is to type the formula for the chosen wave shape into the computer. For ramps and triangles, the maths is more than the average boffin would easily be able to recall. For modulated tones the situation becomes totally impractical.

What is required is a model that the computer operator can become familiar with and through which (s)he can interact. This is not taking a leaf from Prince Andrew's book. The model to which I refer is not the photographic type.

In an infinitely more pedestrian way, a model in this sense is a scheme which parallels and represents more complicated goings-on in a manner which is easier to comprehend. For example, to tune a radio receiver you turn the dial until the pointer indicates the chosen station. You don't have to know anything about reactive circuits, variable capacitance diodes or any of the other gubbins inside the set because the pointer is your model.

A basic model for a digital synthesiser would be its analogue counterpart. We have seen how waveforms can be reproduced digitally and by related numerical means. Controlled amplifiers can be 'digitalised' by multiplying voice samples and filters reduced to differential equations. Finally, envelope generators can be "ghosted" by exponential decay equations.

A digital synthesiser designed along these lines would have the front panel of an analogue synth (the model) and would produce exactly the same noises. The VCOs, VCAs, VCFs and EGs would only exist in software, but despite this, the digital version would probably cost in the region of five to ten times the price of an analogue equivalent.

The conclusion is that by using an analogue synthesiser as a model, the capabilities of a digital synthesiser are severely limited. Perhaps the most individual sound quality available from a digital synthesiser comes from the potential of defining the harmonic structure of a tone throughout its duration. Because there is no pre-existing convenient model available which reflects this extensive increase in the degree of control, the musician is forced to abandon the safe ground of the analogue world and come to terms with Fourier and FM synthesis.

Joseph Fourier was a 17th century French mathematician who proved that any repeating waveform, however complex, could be broken down into a number of sine waves of different frequencies, amplitudes and phases.

Conversely, any waveform can be created from these same elements, and the Fairlight CMI is one instrument which exploits this technique.

Fourier found that the component sine waves of a waveform were whole number multiples of the fundamental — in other words they were harmonics. The Fairlight allows the envelope profiles of 32 harmonics to be entered so that the voices of Changing timbre can be created.

Each waveform has its own harmonic "fingerprint" — sine waves have no harmonics, square waves contain only odd harmonics, and a sawtooth contains both odd and even harmonics. Fourier synthesis has proved to be a very suitable means of calculating wave table entries, and from the operator's viewpoint it is easier to predict what a voice will sound like from its harmonic composition than from its shape.

In the preamble to this article the word domain features quite heavily. This was intentional because it has a special significance in digital synthesis. A computer is concerned with sample values which belong in the time domain (the world about us) but, just to be awkward, humans hear in the frequency domain — the currency is not the same.

Fortunately maths is at hand in the shape of the Fourier transform which can convert a wave table of samples into a collection of harmonics and their amplitudes (how much of each). The reverse operation is also possible. This creates a powerful editing facility whereby a sound can be analysed, various harmonic characteristics exaggerated or removed, and then the data transformed back to computer-intelligible sample sets. The light pen is an excellent weapon for this type of creativity and you may notice that there is not a number in sight.

The Fairlight will allow you to draw your own waveform but the reaction seems to be that you have no intuitive feel for what it will sound like. What seem to be widely differing shapes sound exactly the same. Of course waveforms belong to the time domain and this is further proof that this area is off limits for us primates.

The other competing synthesis scheme is Yamaha's FM Digital as found on their DX range of synthesisers. It should be pointed out that FM — Frequency Modulation — is an analogue technique that forms the model for operator interaction.

The digital bit is in the control of the process and the simulation of the oscillators (operators). Vibrato is FM but the modulating oscillator — usually an LFO — is at a frequency distant from the tone-generating oscillator.

In FM synthesis the modulating oscillator (modifier) is either at the same frequency or higher than the connected tone generator (carrier) and is set to track the keyboard.

The effect can be explained by resorting to weights dangling on springs. When pulled down and released, the weight will bob up and down, and if its position was plotted against time, a sine wave would be given (an operator). If a second spring and weight was fixed to the weight of the first, then when both were energised, the motion of the second weight (a carrier) would be very complex. This is the aim of FM synthesis — to create harmonically rich waveforms from the interconnection of simple sine wave oscillators.

Another FM buzzword is algorithm, which refers to a sequence of operations which will achieve an end result. Yamaha use the term to describe the configurations of modifiers and carriers which may be chosen as the basis for a sound synthesis. To generate dynamic timbral changes, the amount of each modifier sent to a carrier is routed through a logical VCA and envelope generator. The modulation depth may also be dictated by keyboard touch velocity and this gives a natural brightening of the tone when you play harder.

FM synthesis initially appears to be as hit and miss as waveform drawing, but in both these cases, even if the feel is not instinctive, with practice it can be learnt.

Both FM Digital and Fourier synthesis have the same objectives but get there by the use of different models. As technology advances, new models for control will appear which may seem even more abstract than those described here, but for now I must wrap things up. 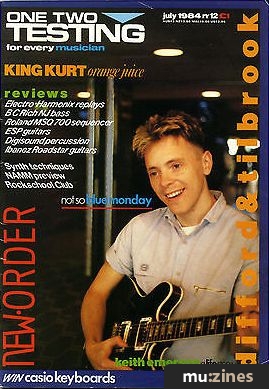 When Is A Computer?