The latest in the DX synth series

For the synthesist on a budget, Yamaha's new FM synth design — the DX21 — is going to offer astonishing value for money. Not only that, but it's going to be more easily available than any of the previous FM synths such as the DX7 and DX9 — in fact, stocks should be reaching the shops as you read this.

The DX21 is a budget synth, very much aimed at the beginner or second keyboard purchaser (perhaps as a follow-up to a Casio or other portable), and yet perfectly capable of satisfying the most demanding professional. For your £699 you're basically getting two DX9's, velocity sensitive over MIDI, plus a chorus unit and a memory expansion package all in a single box.

Let's begin with the familiar starting point of the Yamaha DX9. Like the DX9, the DX21's eight voices have four FM oscillators (operators) rather than the DX7's six, memory dump to cassette rather than cartridge, and (as a stand-alone keyboard) no velocity sensitivity — which means that the DX7 will remain the Pro's choice for a while. But the DX21 has some unique features including keyboard split, velocity sensitivity over MIDI, improved MIDI functions, 128 Read Only Memories hidden beneath the 32 Random Access Memories, and lots more.

The synth's also very compact, with pitch bend and modulation wheels on the top panel rather than to the left of the keyboard, which has a full five octaves of standard-sized keys. There are three main slider controls (Volume, Balance and Data Entry) and the 32 memory select buttons (which have alternative functions in the Edit and Function modes) are a new low-profile type with a definite click, a great improvement over the membrane switches of the DX7. A set of buttons on the left of the Panel access various memory and keyboard modes.

All the DX21's sounds are basically similar to the DX9's — clear and precise, and generally a little simpler than those of the DX7. You can hear on the tape a selection of the 32 RAM memories and the 128 ROM memories, the latter being arranged in banks of eight Pianos, eight Basses, eight Effects and so on and available one group at a time to replace any eight RAM sounds.

You can detune Dual Mode sounds for extra thickness as well as using the Stereo Chorus — in split mode the two sounds come out of different rear-panel outputs. 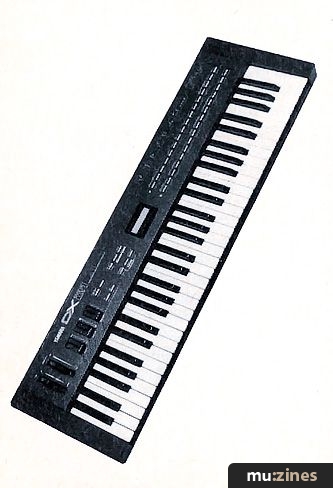 Editing has been made slightly more logical than on the DX7 — you can now increase or toggle on and of a parameter by continuing to press its Function button rather than going back to the Data Entry controls, which saves a little time. But the Play Book supplied, and its accompanying cassette, do more to simplify FM synthesis, with clear examples, block diagrams and basic principles.

New MIDI facilities on the 21 include independent transmit and receive channel select, Omni (all channel) mode on receive, MIDI On/Off, selectable response to patch changes, key velocity, modulation, breath control, portamento and data entry from outside, and if any envelopes are patched to controllable parameters in a sound, these can be controlled by velocity information from another keyboard such as a DX7, Prophet T8 or SIEL synth.

So the DX21 is ideal as an expander for a velocity-sensitive synth, or as a peripheral for a MIDI sequencer being programmed from such a synth. There's improvement on the function labelling too — one new function, for instance, is Key Mode for the pitchbend, which allows you to select whether all notes, only the highest note, or only the lowest note will bend, and this function is now labelled next to the LCD display so you know what's going on.

The other major addition is the provision of 32 Performance Memories which allow you to load up one or two sounds, portamento type and time, split point, pitch bend and modulation depths and so on, a massive improvement over the situation on the DX7 where once you'd programmed one set of such parameters you were stuck with them. So, for instance, the Bass sound is automatically monophonic and has a lifelike fingered portamento, the piano sounds have just the right depth of modulation, and soon.

On to the rear panel, where we find stereo jack outputs, sockets for a portamento and a sustain footswitch, volume pedal and tape dump to an MSX-style or standard cassette player, MIDI In, Out and Thru, and breath controller and headphone sockets. The LCD display allows you to name every RAM sound and the performance memories, and as before it's possible to look back to the original value of a parameter when editing to check what you're doing using Edit/Compare.

In fact almost nothing has been overlooked. It's almost impossible to fault the DX21, particularly at the price; from the tape you can hear just a few of its capabilities, and rest assured that there are a lot more useful sounds hidden away in those permanent 128 ROM memories.

The DX21 is inevitably going to be a winner for Yamaha, and will give the opposition some large headaches as they struggle to cut prices to match. Anyone looking for a first real synth, or an expander of any kind, should be considering it now. 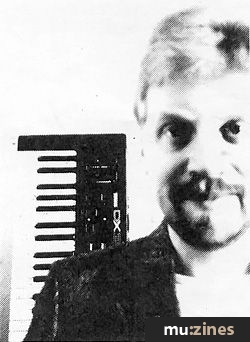 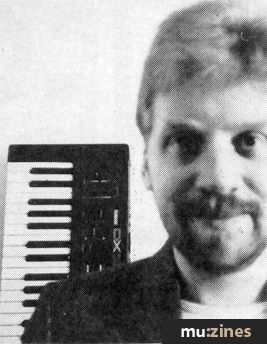 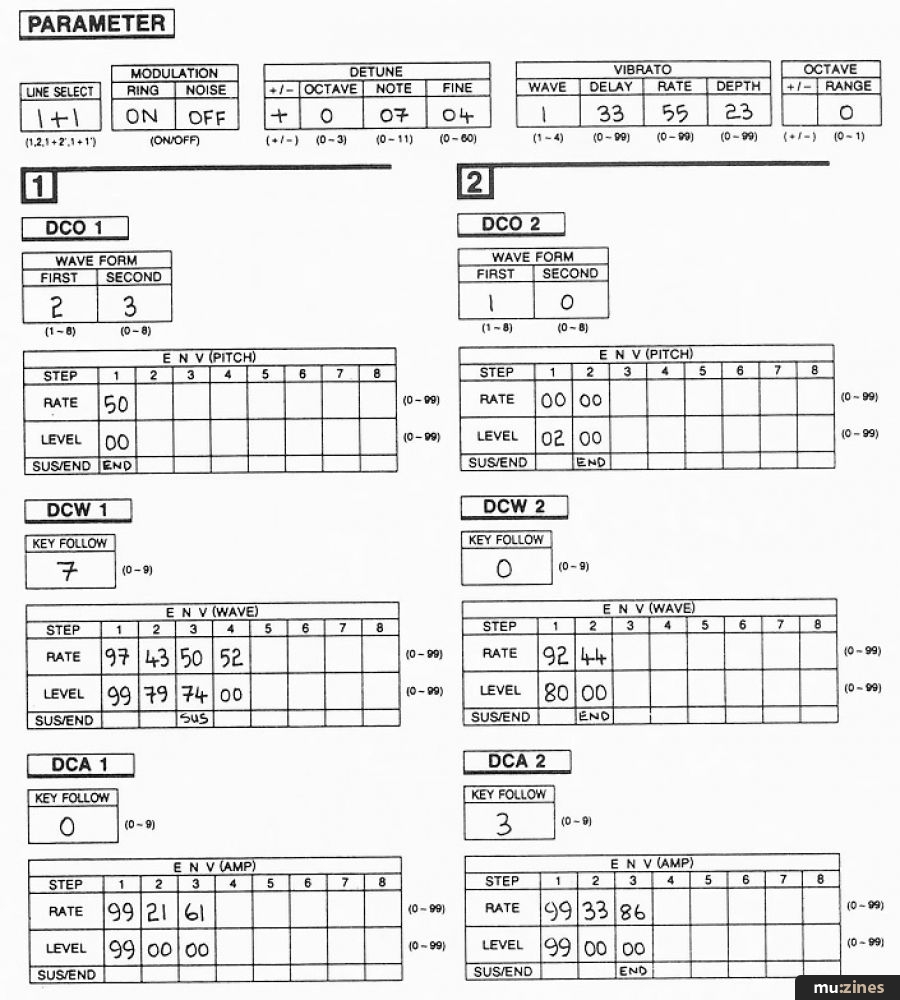 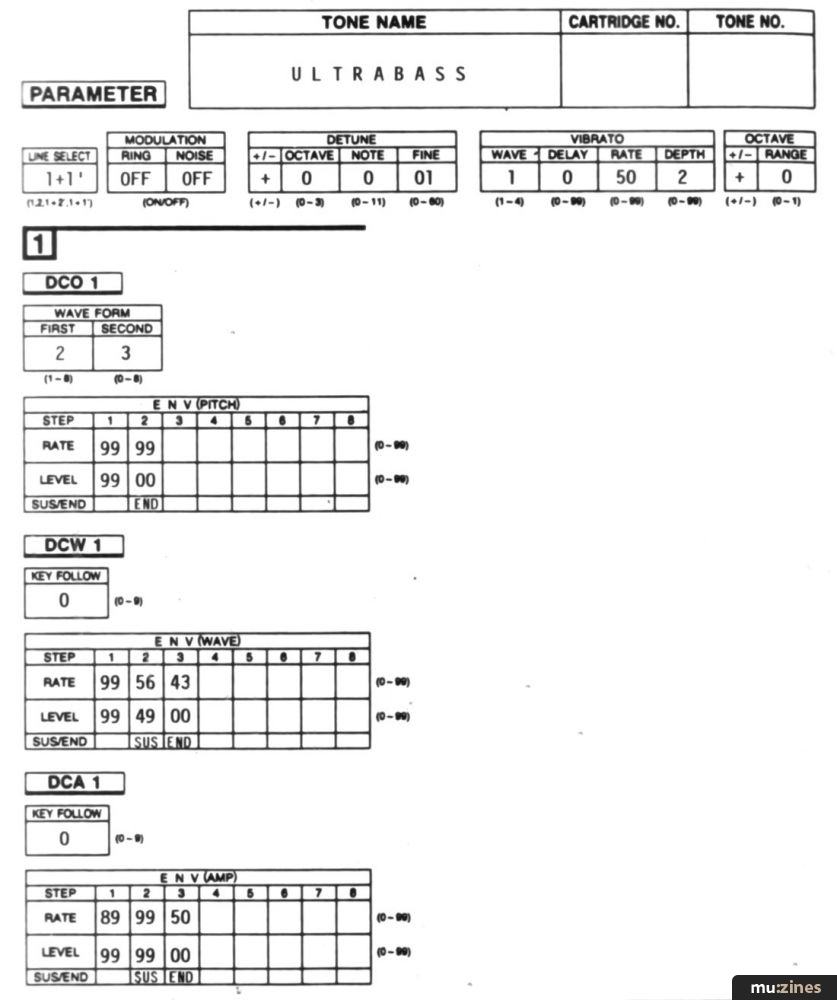 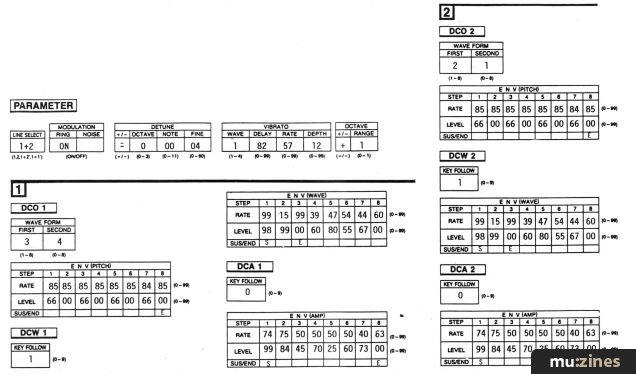 One Over The Eight? 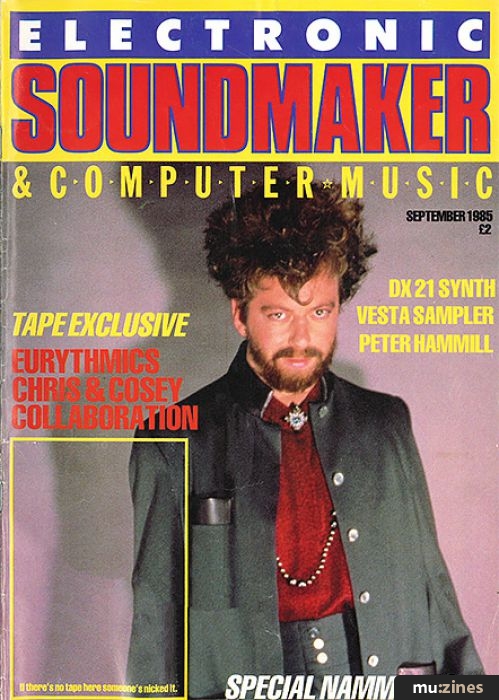 > One Over The Eight?