Hot on the heels of their Digital Multi-Effects processor reviewed last issue, comes this somewhat intriguing delay unit from American manufacturers ADA. For a change, it is an analogue system. Based around the Panasonic MN3011 multi-tap delay chip, it's capable of producing short delays ranging from 1.3 milliseconds to 55.5ms - very short by comparison to today's digital delay lines. A companding IC is also utilised to overcome the high noise that commonly betrays most analogue effects. Bandwidth is specified as 20Hz to 13.5kHz, but the latter figure was almost certainly measured on the shorter delay ranges, since bandwidth reduction for increased delay times is an inherent trade-off of all bucket brigade delay devices such as the MN3011 chip used here.

That's not to imply that this ADA unit is lacking in the sonic realisation department - far from it. I'm genuinely glad to see this multitap technique come to fruition in a commercial product aimed at the studio market. If you think of the device as six separate delay units acting simultaneously on one mono input signal but whose outputs can be assigned to one of two outputs on the ADA, then you should get a fair picture of this machine's potential. However, a run through the controls is in order to gain a full perspective.

Being analogue, the front panel of this 1U high, 19" wide case is free of any digital time display, preference being given to conventional rotary knobs and good old-fashioned toggle switches. If you're a hi-tech freak don't let the ADA's mundane appearance put you off. After all, it is the value and sonic quality of the effects it produces that you should be judging.

As mentioned, there are six delay circuits or 'taps' as they're called, each producing a non-harmonically related delay. This trait makes realistic-sounding effects far easier to achieve than on any digital delay. The individual tap's minimum delay times are as follows:

A particular tap is introduced by its front panel toggle switch which removes the tape completely in its central position (no delay) or else assigns it to either Buss A or Buss B output sockets (on the rear) when switched up or down respectively. Simple and straightforward. Up to six taps can be used simultaneously with the delay ratios from one tap to another always remaining fixed. However, the overall length of each cluster of delays can be increased to five times their minimum value using the right-hand Fixed Delay control.

Modulation can be applied to delayed signals via the Sweep and Sweep Mod controls adjacent to the Fixed control. Sweep speed ranges from a usable 0.1 seconds (vibrato) to 25 seconds (or six sweeps per hit record!). A welcome bonus feature is the Sweep Mod which cleverly interferes with the main modulation sweep, adding an essentially random character to the otherwise predictable sweep pattern to create a more natural feel to effects like chorus. It can be set from fast (0.1 sec) to slow (0.5secs) or totally off. On fast settings I felt its effect was still too subtle but nevertheless useful.

For those who like even further control over modulation facilities, CV In sockets are located on the rear panel which affect Delay Time and Sweep Speed. Any synthesiser with a control voltage (CV) output (in the range of 0-5 volts), could well be plugged into these.

A CV from an ADSR (envelope) generator could then conceivably be employed to control delay time such that the delay changed automatically as determined by the fluctuations in the attack and decay characteristics of a particular synthesised sound. Used tastefully on appropriate material, it can produce stunningly different chorus sounds. A solo 'fuzz guitar' imitation from my Sequential Circuits Pro-One mono synth really jumped out of the studio monitors having been instantly sextuple-tracked by the ADA (all 6 taps on minimum delay with the Pro-One's CV Out fed into the Delay CV In socket on the unit. Jan Hammer eat your heart out! A CV Mix control thankfully determines the degree of effect the external control voltage has on the fixed delay/sweep parameters. So you can have your synth's CV connected but its effect diminished until this control moves from its 'fixed' position.

A single delay or repeat from each tap is obviously of limited appeal and so as not to disappoint, ADA have incorporated regeneration facilities. Since on conventional single delay lines regeneration is created by feeding a variable amount of the delay's output signal back to the input (for further delaying), with six outputs available from the delay chip, clearly there's some choice as to which signals are regenerated.

On this ADA model, a compromise is made (pity) so only taps 1, 3 or 6 (the brochure says '5' but it is tap 6) can be used for regeneration - though not simultaneously. The volume and number of repeats obtained is controlled, as ever, by the Regeneration level function. Tap 6, full delay/full level, produced that classic Hank Marvin flutter echo/reverb if used with an appropriately tremoloed guitar (preferably a Stratocaster).

The Regen section also sports a Hi Cut control. This is essentially a low-pass filter arrangement whose cut-off point (all signals above this point are rejected) is variable from 900Hz to 10kHz. It's real value is to add a touch of variety to effects and as a safety trap to prevent high frequency signals outside of the bandwidth of the ADA's delay chip from upsetting the regeneration loop.

The final controls relate to the Buss A and B outputs. As the unit is stereo and taps can be assigned to either buss, provision has been made for mixing the blend of dry and effected signals on each buss. Once a mix has been set, the overall output level of the ADA can be set via the master Output Level control (max +20dBm). This is handy if using the device in-line with a guitar amp, for example, since you can alter the required output level to match the amp input without upsetting the crucial blend of dry and effected elements. Personally, I'd like to see this feature applied to all mono effects too.

This is one of those devices that whets the recording engineer's appetite. It can be, at once, extremely useful yet frustrating. I found myself wishing it had separate outputs for each delay tap, or that each tap could be individually modulated... It appears to lift any sounds you care to put through it into another dimension. Feeding a guitar directly into the input, setting all taps to one output on minimum delay, then into a Dynacord digital reverb, produced a truly magnificent sound - even in mono! Just as with chorus on guitar or aural exciters on a stereo mix, when you use this device you wonder how on earth you got by without one, as the untreated signals sound so dull and lifeless.

The only reticence I have in recommending this device concerns its UK selling price. At £799 including VAT, it is not cheap, but you've got the plummeting dollar/sterling exchange to thank for that. If I were reviewing this unit a year ago, it would have received a hearty 'thumbs up'. But I'm not - so my conclusion must be "one to aspire to". 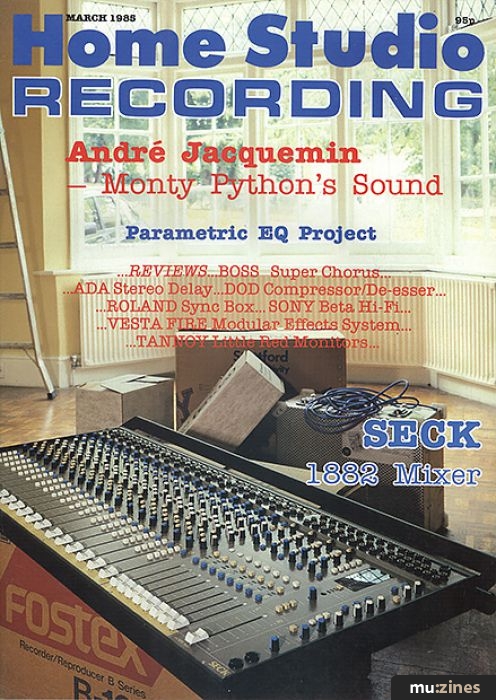