Hubbub from the hub of the biz

Casio Comp Climax
...While we're on the subject of competitions, come on down Barry Wright of Newcastle, S. Dean of Letchworth, Herts, and Valentin Barrios-Ambroa from London SW18, who get to carry off a Casio MT210, a PT82, and an MT18 keyboard respectively. All three are the lucky winners of our Xmas Gift Guide giveaway, arranged in conjunction with those awfully nice Casio people in our Dec '85.ish? Merry Christmas! (Look, I know it's the middle of summer, but that's what you get for being so forward thinking.) Next month: see the New Year in with IM & RW – The magazine that's so far ahead it's coming round for a second time!

Said John of his new Wonderbar trem-equipped Washburn: "This is the first Japanese-made guitar I've ever liked!"

And of his Session amp head and twin cabs: "They're really loud." A man of few words, our John. The less said about the motley crew (Motley Crue) behind him, the better, but just for the record second from left is our esteemed Ed, Tony Horkins, and sitting next to him, the man with the funny ears is Gavin Mortimer from Washburn. The rest are just gatecrashers.

I'm sure by now that everyone is familiar with the traditional Chinese cymbals. They have cylindrical bells with an upturned flange and a short 'clashing' sound: some of them are even made in China! Meinl are one company who used to import them from the Orient who have recently opted instead for importing just the 'blanks' of metal, which they subsequently turn into improved instruments in Germany. These are called Dragons, and like all Chinese cymbals, their upturned flange provides the player with several different sounds depending upon where the cymbal is struck. Sizes range from 10" to 22".

Meinl also make conventional occidental cymbals with regular profiles from these Chinese blanks. The material has a very high percentage of tin in it to engender that 'clash' but when it's used in an ordinary cymbal it tends to create a very dirty, Turkish type sound. This particular range is called Double Dragon and is produced in diameters from 6 to 22 inches. The range also includes very jazzy hi hat pairs which will surprise many aficionados. As far as I can ascertain, none of these particular cymbals sells for more than £100. They're real bargains! BH

Middlesex-based company Supersoft, makers of the excellent Microvox MIDI sound-sampling package for CBM64s with disc-drive, have just released an optional upgrade to the monophonic system which makes it even more attractive to the semi-pro and home user.

The Eprom-Pro package simply replaces the existing cable between the Microvox interface (compatible with Joreth and JMS software also) and the computer with one containing the software on Eprom – so the system is ready for use the moment you switch on. On this new version the Sequencer page (Page 5) has gone, but a number of new facilities have been added. On the purely cosmetic side, the graphics on the versatile sample editing page have been tidied up, with the three manoeuvrable 'flags' used to set the Start, Loop and End points of a sample much neater to look at.

Far more significantly, this page is now also equipped with an Auto-Looping facility, a la Greengate. Previously, the laborious scanning of the waveform in search of the magic, glitch-free zero crossover point was a frustrating and lengthy process. Now, it is faster – but not instant. In effect, the ALT (Auto-looping Tool) scans through the waveform itself, pausing at likely points, and inviting you to Listen to the result. If it isn't satisfactory, then pressing the Insert/Delete key starts the process over again. Starting at the beginning of the sample, or at the current cursor position (allowing you to limit the area of the sample to be scanned), the ALT will eventually scan the entire sample, 'dragging' the loop flag with it further into the sample every three or four run-throughs. Some complex waveforms cannot be looped successfully at all; some are perfect. On average, an acceptable loop point can now be found within a few minutes.

Sample length has also been slightly extended; at the highest bandwidth of 20kHz, the Microvox can sample 0.950 of a second.

The MIDI implementation now offers velocity sensitivity, affecting sample brightness, volume, or both; samples (a maximum of 16 at a time) may now have their respective volumes balanced against each other; and be 'fine-tuned' ±4 semitones.

The 'Special Effects' page, which previously offered only a (very good) digital delay, now also offers Harmonising, (± 12 semitones) and a variety of phasing, flanging and chorus effects, using Triangle, Sawtooth, Square and Random (for Sample and Hold) waveforms. A neat bar-graph display makes the setting of modulation speed and depth a very straightforward business, and the quality of effects produced (in conjunction with the interface's front panel Repeat control) is high, within the bandwidth limitations of the Microvox; especially with the on-board companding switched in.

The basic Microvox system, with disc-based software costs £229.95 inc VAT; the Eprom Pro Upgrade £70. Further updates and extensions to the system are in the pipeline. More info from Supersoft on (Contact Details). TR

OK so you've got your band together, rehearsed all your material, set up a few gigs and then comes the crunch. How do you promote it? Well, unless you're blackmailing your bank manager, or daddy has the controlling shares in a Multi-Fascist Conglomerate, you're probably not going to be able to afford a full page in one of the music weeklies telling the rest of the world and the record companies that you're playing. Posters also cost a small fortune if they are going to be distributed over a wide enough area to be effective.

There may now be a solution, as all the best Tomorrows World intros go, in the form of a Dial-a-Disc type phone service. It is being used at the moment by, as yet unknown band, State of the Art to promote a couple of showcase gigs. How successful these will be will only be known after the event, but so far things are looking good with an impressively long list of big name record companies etc. expressing interest.

This service is available to any band who want to use it and costs from £80 upwards and as well as being cheap does lend a professional air to your band's image. It is run by a company called Stora-Call who will provide everything needed (namely a phone line and a multi announcer) and they can be contacted on (Contact Details). What you get is basically, a chance to have a brief one sided chat to the caller and then play them the demo of your latest song or whatever. All you have to provide is the tape with your message and song and they (Stora-Call) will do the rest.

Well all I can say is thank God that it is a recent invention 'cos I have this horrible vision of one hundred and thirty seven thousand hippies camped around the only 'phone box for three days listening to one side of 'Tales from Topographic Oceans' while your house is slowly burning down... CHH

The Rose-Morris shop in London's Denmark Street recently played host to the Roland Roadshow which has been zipping around the country of late. Among the products on view were the GR guitar and bass synth controllers, the Octopad MIDI trigger pads, and the new TR505 drum machine. The guys demonstrating it all, including Whitesnake's Neil Murray, took a couple of hours to display the new, RAM-based voices now available for the synth controllers, and played some good music in the process. The GR77 bass synth was clearly the star of the evening, showing obvious developments from the guitar design, such as better tracking. Apparently the GR707 guitar synth is taking the hint, as an uprated version, with improved tracking and a few more surprises, was mentioned. I can't wait... CHH

So there we were, taking a break from Messe-minding at the Simmons stand press party, and who should amble over but Baz Watt, one-time Q-Tips drummer, currently Simmons demonstrator, and long time pal of Mr Simmons himself. Well, to cut a long story short, heavy was hefted, tongues were loosened, and suddenly there it was: the whole hallowed history of the hexagonal pad laid bare:

"I first met Dave in about '74-75... Did you ever hear him play piano? He's really good... Dave was working at Boosey & Hawkes at the time, repairing ARP synths. Got a really great guitar sound too...

"I eventually persuaded him to join my band – real clever stuff. You know – 'Oh, I've got a hand free. I'll play something else.' I was using tubular bells, the lot. Anyway, Dave had the idea of taking these foam trigger things from an old ARP Soloist synth – you squashed the foam together, and a metal strip inside made the contact – and mounting them on the top of some of the tubular bells. So I ended up with these five pickups mounted on a tom arm, triggering all this awful analogue stuff...

"People listening to it just used to laugh! We called it the Simmons Drum Synthesiser, which I suppose makes it the original SDS1.

"We then took that one apart, and made one which was half decent, at which point I think Dave must've decided there might be something in it, coz he spent time on building a proper chassis for it. That became the SDS3 – the 4-pad thing.

"Then the Q-Tips gig came up, just as the Five was launched..."

And the rest, as they say, is history.

I spotted these rubber damping rings in the Premier catalogue. They're called Flat Rings, measure 1" wide by ⅛" thick and are meant to sit inside the drum hoop and rest on the head. This works in roughly the same way as a PinStripe head since it stiffens the outer portion of the membrane. (The difference of course is that with these rings you may remove them if you want to have a 'liver' sound.) Flat Rings don't exactly kill the tone like a practise pad would, as much as I'd feared. It still allows the drum to resound, but shortens the decay somewhat. Of course you can use the rings for quiet practice at home (although they don't turn your set into a soundless one), but for me they will come into their own in the studio. All in all they're a useful alternative to gaffer tape and the like. They do cut the volume significantly though and are available in the usual sizes at reasonable prices. BH 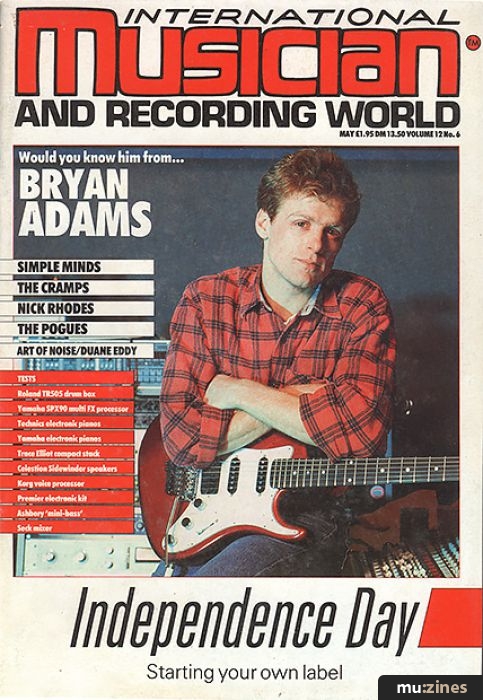