I first saw, and indeed wrote about, this APT system when I was at C-ducer's factory in the middle of 1985. At the time I was there to test and comment upon a Cactus drum set but they allowed me to have a sneaky look at their new trigger system. Although only a prototype, I recognised immediately that here was the answer to my, and a lot of other peoples', prayers.

APT is a very simple, yet highly effective way of persuading one's acoustic drums to trigger the 'brain' of an electronic drum kit. This feat has been accomplished before with varying degrees of success, but C-ducer's system allows the equipment to produce an audio signal too. It manages this via C-tape, which is a piece of microphonic ribbon which sticks inside the drum (with double sided tape) and picks up the sounds very accurately.

Now, it would be wonderful if you could simply take this signal to the brain and trigger its sounds; but unfortunately you can't. This signal is too wide and tends to create false and double triggers. Therefore it must be 'spiked', ie squashed to create an obvious trigger point. This in essence is what APT does. So, we have the real drum sound going to the PA amplifier with the trigger impulse going to the electronic 'brain' and then onto the PA. As you can appreciate, it gives us the very best of all worlds.

APT is a sort of acronym for Acoustic Percussion Trigger. It comprises a box measuring 18" x 5½" x 2", which could be rack mounted, containing the inputs and outputs to do the job. It has five channels, therefore five identical modules. Each has just three pots in a north-south line which control level for output A or B and threshold. There's a jack socket for C-ducer input and an unbalanced jack output socket.

At the back edge is a balanced audio output via an XLR socket as well as jacks for the two trigger outputs (A and B). There are 15 of these sockets along the back and one Euro-plug mains socket. That, as they say, is more or less that.

APT does what it's expected to do and works well. However, it can also be persuaded to execute some pretty nifty manoeuvres which it wasn't necessarily expected to. Konk Studios are playing host to a high profile American producer at the moment who's working on a top-secret project with some very capable musicians. What he, and Dave Powell the engineer are effecting is pretty mind boggling. They have a drum set which is miked in the normal, time honoured way, the sounds from which go straight to the desk in the control room and ultimately to the multi-track recorder. So, here we have our usual drum sound. The C-ducers are then attached to the shells of the drums. (This is not normal, because to get optimum sounds we must have the tapes inside the drums, but for what they have in mind it's fine.) The trigger outputs are used to activate a Simmons 'brain' which goes immediately to the desk and tape machine. The audio 'outs' from APT are then utilised to take the drum signals to one of Syco System's PSP units. This serves to process the dynamic as well as the MIDI encryption.

From here our signals go off happily to an Emulator via MIDI out and to a Roland MSQ via MIDI sequencer out. The purpose of the Emulator feed is to enable us to hear the sounds already loaded into the synthesizer in 'realtime'. It's just to check really. The MSQ is in the line to memorise the patterns that the drums are playing and how hard they were struck. Now, MSQ's MIDI out goes to Emulator (or it could be Linn 9000 or Emulator 2) and the drum sound you have in mind will be forthcoming once it's loaded in having been sampled. However, just to make sure that everything plays in sync with the original drums a DrClick is put in the line via the Sync input of the MSQ. This will keep all those 'drummers' together.

Now, we can overdub or replace drums anywhere we like in the track without having to touch another drumstick. I appreciate that this all sounds just a little complicated and I'm not sure that it isn't supposed to! But it does work and is a wonderful way of being able to utilise all one's drum sound options without the danger of losing the feel.

FOR: Everything.
AGAINST: Very little.

Since I last wrote about C-ducer tape they've come up with new jack plugs which maybe disconnected without having to resolder the joints. This enables them to pass easily through the air-hole of a double-headed drum.

There are a lot of people who view this sort of system as being, with some reservations, the way things will be in the future. Real drums with the option to be electronic ones. We shall see...

Ultimate Percussion One Up 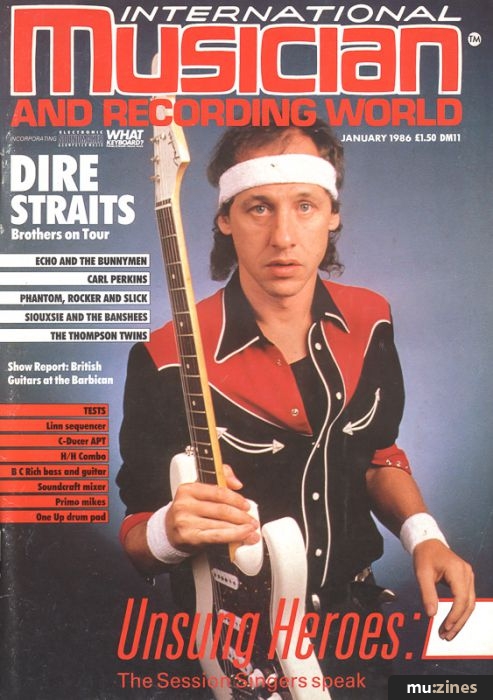 > Ultimate Percussion One Up