The 260 supercedes the 250 and, it has to be said, it's about time. When it first came out the only competition was the original Teac Portastudio 144 from which all four-track cassette systems have sprung, and thus it was seen as being pretty splendid. Then came Teac's Tascam 244 with twice as many features and a similar price, and if it wasn't for its use of Dolby C (deemed by many as superior to the dbx used on the 244) it might well have been pushing up daisies years ago.

The 260 looks great. It's sleek, relatively lightweight and modern looking with a raked control panel and a curved cassette compartment cover in smoked perspex that lends it the appearance of some kind of racing machine. Cosmetically it's taken a leaf out of the new Seck mixer's book and features a similar (though not the same) breed of slick new control knobs and a generally pleasing pastel colour scheme. Its top surface area is marginally greater than the 250 but its streamlined design gives it a less bulky form and all the controls are well laid out with plenty of room for access. The four main channel input jacks are on the front together with the two headphone output jacks and the drop-in/out footswitch jack. This arrangement is far more ergonomic than the Tascam approach of putting everything bar the headphone outputs on the rear panel, thereby necessitating much leaning over and squinting whenever something needs replugging — which it constantly does with such a limited number of input channels.

The remainder of the input and outputs are on phono sockets positioned very accessibly on the top surface of the machine. The only glaring omission here is that of channel insert points. This means that any limiting, gating or use of effects not using the auxiliary sends must be done outside of the machine. At one time this would have been more serious than it is now because processors have always tended to need line level signals. But modern home recording processors can generally take either line levels or the direct output of a guitar or synth, and thus insert points aren't quite so important — although it is nice to have them.

There are two mono post-fade auxiliary sends plus the 'Monmix' which is a stereo foldback/monitor mix which can be used as extra effects sends on mixdown. This is more or less the same provision as on the 244, except that the 244 has a single stereo aux send which can be used as two mono sends via its pan control.

Tape speed is 3¾ips +/-15% varispeed. This gives better quality that 1⅞ips but isn't compatible with domestic machines. The transport is reasonably quick and positive in use with full logic controls and an LCD digital tape position counter. The only omission is that of a 'Pause' button, but I never use them on systems like this anyway. The display has a RTZ plus a memory facility that allows you to program in a second reference point anywhere you like to which the machine will rewind: very useful for overdubbing from a particular point. An LED display would be preferable to the unlit LCD which simply can't be seen in the dark. Here the 244 wins out.

If you're used to using other more 'normal' portastudios, the 260 takes a bit of getting used to. It is no small admission when I tell you that I had to read the manual before I could get much sense out of the thing, but it wasn't long before it all fell into place and what at first seemed like rather boringly different operational tactics on the part of Fostex proved to be highly ergonomic and flexible.

Four proper mixer channels are augmented by an extra couple of line-in phono sockets, referred to as auxiliary inputs, which don't have any eq or auxiliary send facilities etc, but do have level and pan controls to allow them to be sent to the tape deck via the channel/track routing busses of which there are only two. Having only two routing buses could mean difficulties with certain channel/track permutations but as each of the four main channels can also be routed directly to its corresponding track (1-1, 2-2 etc), there is no real limitation. What you can't do, however, is to have, say, channels one to three routed to a stereo pair and channels four to six going to another track or pair of tracks. You could, however, have channels four to six going to a stereo pair and two of the remaining channels going directly to their corresponding track. If you're not an experienced portastudio user, such details may seem pedantic, but for those who've had their hands tied by routing limitations, it's important stuff. This four + two layout isn't quite as flexible as having six complete input channels as found on the Tascam 246 or the Audio Technica AT-64, but it's considerably less expensive and in practice it simply means that you may have to think a little more, and do a little more replugging. If you did get used to the simplicity of having six complete input channels with four individual track routing buttons (as with the 246) this arrangement could seem laborious but, at this price, the main focus must be the provision of two more inputs. Normal bouncing and bouncing whilst mixing in and recording a live source is very simple and effective, as is final mixdown.

Once under way, recording, playing back and overdubbing are all very effortless with the switching between line-in and tape replay being handled automatically (a big plus) so that all you have to do is go into record, play your instrument, rewind and hit the play button etc, etc, until you get the part right. There's no messing about with changing channels if you're doing several guitar parts on different tracks, the routing facilities allow you to leave the guitar in the same input.

As you would expect there is a single unbalanced ¼" jack input socket for each of the main channel inputs which are situated on the front edge of the machine making plugging and replugging easy. These inputs are intended to cope with the whole possible range of mike and line inputs which they did manage to do although there wasn't a great deal of headroom and I found that plugging in an electric guitar directly required a certain amount of level juggling between input trim, channel fader and guitar volume to avoid slight overload distortion even with the LED meter peaking below the 0VU. The situation persisted when I tried feeding it from the DI output of a guitar amp, and so it wouldn't appear to be a problem of impedance mismatch (the input impedance is 50k ohm) but rather one of pure level. This was a nuisance but didn't finally stop me doing anything, and once I'd found a working gain structure, keeping the levels down a little produced a very acceptable result.

Metering is via four large LED vertical bargraphs which, for my money, are greatly preferable to the moving coil VUs (needle type) meters found on the Tascam 244 and the 246. If you're perhaps sitting several feet away from the machine trying to get the record level right using the synth's volume control, it's extremely difficult to see the position of a darting hairline needle whereas an LED ladder is clearly visible regardless of distance (within reason) or lighting levels.

The eq is two-band sweepable providing +/-15dB covering the ranges from 80Hz to 1.2kHz and 700Hz to 10kHz. It would've been nice to have had an extended bass range to allow the rolling off of mains hum and rumble, but in practise it worked well and sounded reasonably musical. By giving full boost at around 7kHz and 1.2kHz, and adding a little chorus pedal and digital reverb, I achieved the full, bright guitar sound I was looking for without the use of an external amp.

I've always much preferred Dolby C to dbx for home recording applications, and especially as found on four-track cassette machines. Since the 244, Tascam have used exclusively dbx on such machines and the 244s I've tried have definitely had problems with noise reduction pumping when used with percussive sounds. In contrast the Dolby C on the 250 is quieter and that on the A8 is really quite phenomenal. However, with the arrival of the Tascam Porta One I was given cause to re-evaluate the capabilities of dbx, because on this model it seems to be extremely good, and comparable to Dolby C. Listening to a snare drum in isolation coming back from tape on the 260, the Dolby C did pump a little, though not at all badly relative to other systems. The noise level was good, but not exceptionally low; about what you might expect at the price. It can be switched out for all four tracks at once if desired.

Dropping in and out is very simple. Each track has its own Record Ready/Safe button and associated LED and if these are selected for Record Ready and the Play and Record transport buttons are depressed the relevant tracks will go into record. Alternatively, these Ready/Safe buttons can be used to individually drop tracks in and out of record on the fly. Pressing the transport record button when in Stop will instantly give you line-in for those tracks that are Record Ready selected. 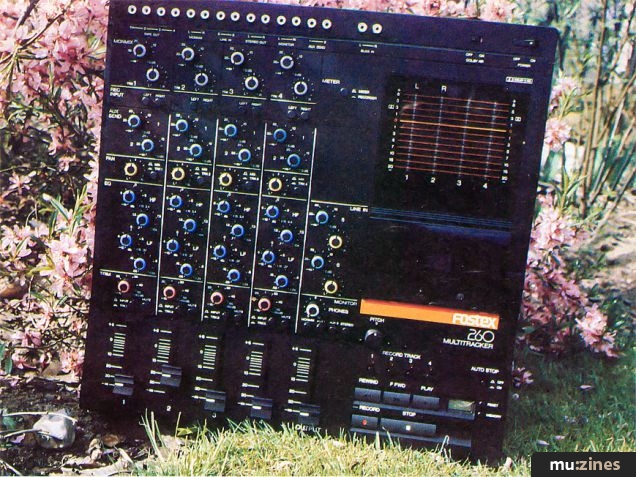 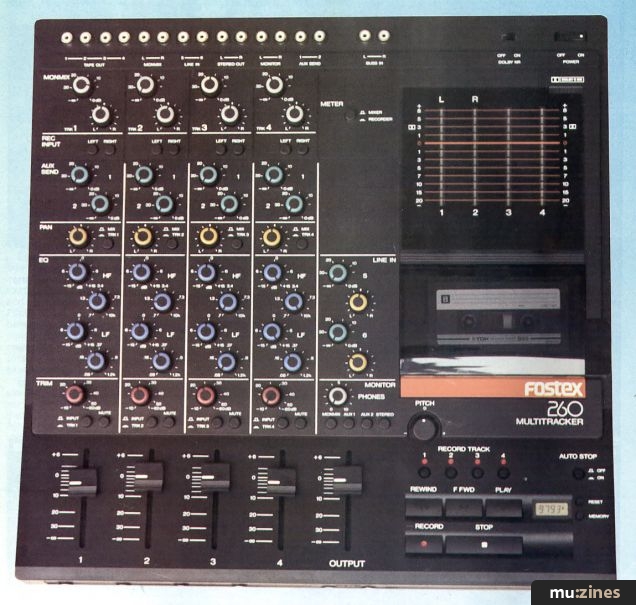 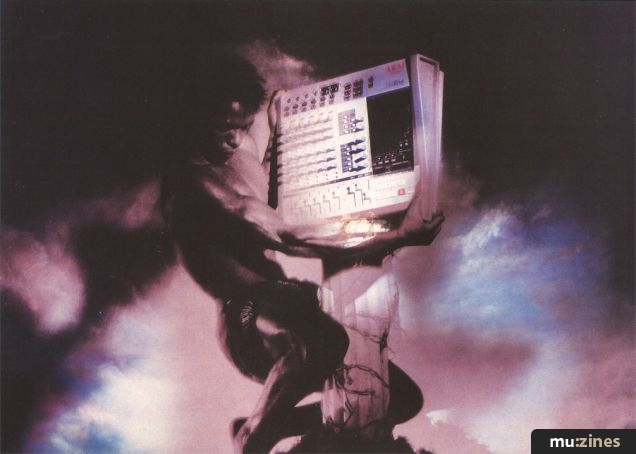 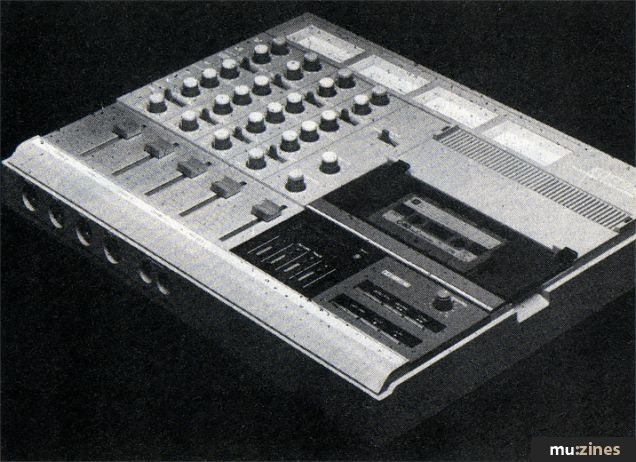 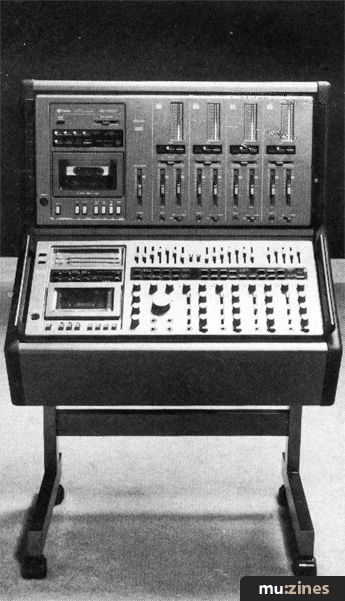 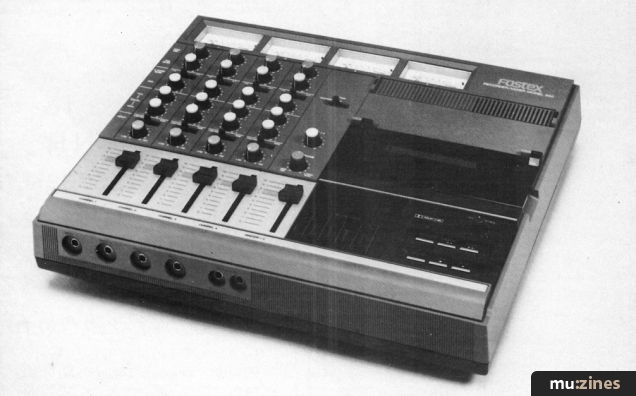 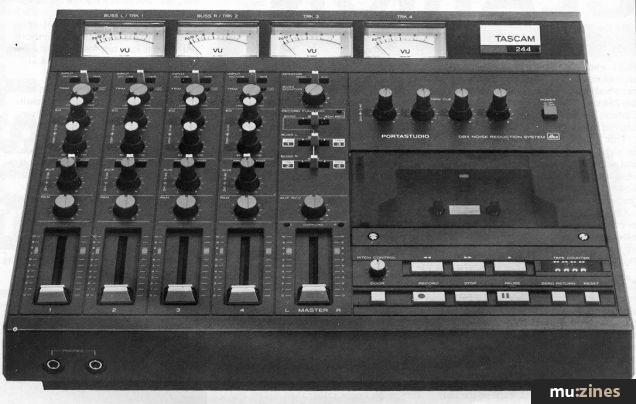 Studio Of The Month 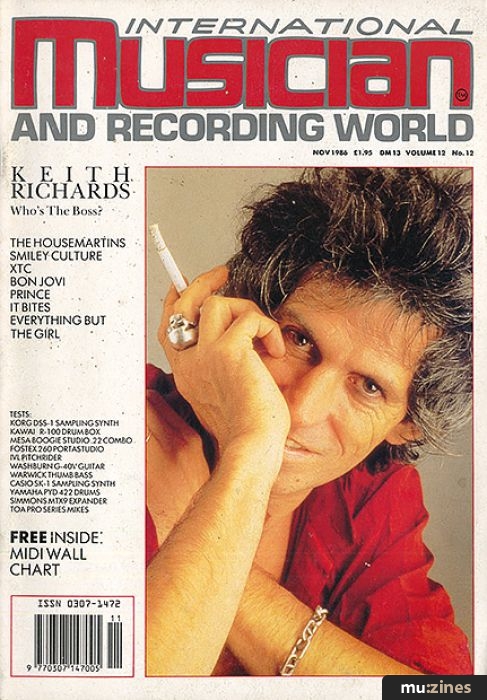 > Studio Of The Month