From the home of the M1 and the Wavestation comes SoundLink - an advanced digital recording and editing system. Simon Trask trips into the future. 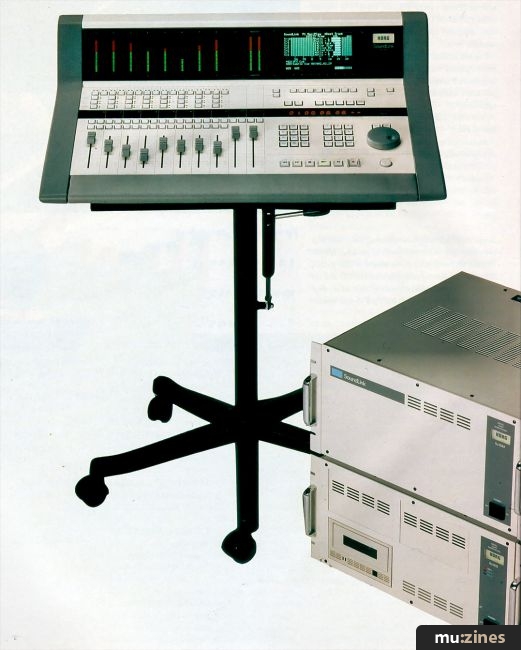 Dropping the price of almost any commodity is a good way of promoting interest in it. From the early projections, the total cost of Korg's SoundLink hard disk-based recording system has fallen by some £7,000. The asking price for this state-of-the-art digital recording and editing system with integrated MIDI sequencing facilities now sits at £23,000 - and that's including VAT. What that buys you is the SL100C console, ST-SL100C stand, SL100M main rack unit and SL100S storage rack unit. The console is the operational centre of the system, and so it's important that Korg have the presentation and the user-interface right. The company have opted for a console layout which attempts to keep things as familiar and as visible as possible, without looking too cluttered and daunting. My impression is that they've struck a very successful balance.

The left-hand half of the console has been given a familiar mixing desk-style layout, with a fader for each track plus a MIDI fader and a Master fader. Other track-specific - or rather, channel-specific - controls include Mute and Solo buttons, Line/Track select button and Record select button. Located above these, running across the width of the eight channel faders, are 16 buttons for the 16 tracks in the onboard MIDI sequencer (more later), while running across the top of the front panel are the audio level meters.

Occupying the right-hand half of the console are tape transport-style controls, a Store Mark button for creating Marks on the fly (which you can subsequently use for cutting up sections of tracks, for example), a numeric keypad and infinite rotary wheel (for locating and editing), dedicated buttons for accessing SoundLink's modes and functions, an LED display (which can display the current location in a recording in bar/beat or timecode values), soft buttons, and cursor up/down and page up/down buttons for navigating around the software pages. The console has a black and white display built into it, but you can also plug in an external RBG monitor for a fullscreen colour display of the currently-selected software page.

The stand allows the console to be angled forward for the optimum working position, while underneath the console a tray containing an IBM-compatible computer keyboard can be slid out whenever you want to type in a text entry, then slid back out of sight again. All in all it's a very neat arrangement.

The console's rear panel is positively bristling with connections. To begin with there are eight XLR A/D inputs (16-bit linear, 44.1kHz or 48kHz, 64 x oversampling) and ten XLR D/A outputs (individual channels and master L/R, 18-bit linear with eight x oversampling). There are also connections for timecode in/out, metronome out, VITC and house sync input, AES/EBU and S/PDIF digital ins and outs, a 9-pin serial RS422A connector for machine control of U-matics, and two sets of MIDI In, Out and Thru sockets (one handling standard MIDI performance data, the other dedicated to MIDI Time Code).

The SL100S storage unit comes fitted with a 680Mb formatted Hitachi hard drive, slots for another two optional drives, and an Exabyte 8mm tape streamer unit for backing up the data on the hard disk(s). An optional second storage unit has slots for another three hard drives, giving the system a maximum capacity of six 680Mb formatted hard drives; a fourth slot on the second unit is intended to hold a magneto-optical drive as another backup medium - but, as of writing, it hasn't been decided whether the drive is to be 5.25" or 3.5".

The single hard drive SoundLink comes fitted with provides enough storage capacity for 120 minutes of 16-bit 44.1kHz digital audio - so a fully-expanded Soundlink system would be able to handle 720 minutes, or 12 hours. Of course, if you were to allocate that time evenly across SoundLink's eight tracks you'd get 90 minutes per track. But SoundLink doesn't force you to work in any particular way - you could use up all 720 minutes of recording time on one track - the multitrack tape analogy doesn't hold up when you're working in the disk-based digital audio domain. In fact, disk-based audio recording has much more in common with multitrack MIDI sequencing than with tape, conceptually. For instance, although SoundLink operation and editing is based around a multitrack model, the flexible way in which you can piece together tracks using Sounds (recorded audio data) and Segments (sections of Sounds) is more like, say, Cubase. In fact, disk-based audio recording is the only form of audio recording which provides the same sort of flexibility in the audio domain that a sequencer gives you in the MIDI domain.

SoundLink can record eight tracks at once if need be, and of course play back eight tracks at once, too. Tracks can also be bounced down digitally - so you could bounce down as many as seven tracks onto the eighth track. Tracks appear as strips running from right to left across a Play head (a vertical cursor bar) located in the middle of the screen.

Recording to disk is a completely dynamic process; tracks needn't be tied into any particular hard disk - in fact, any audio data stored on any hard disk in the system can be assigned to any track. SoundLink is also a non-destructive editing system, so it allows you to cut up recorded audio data (a Sound) into many different Segments without affecting the data on the hard disk. This is because it defines Segments by means of address pointers into the Sound data on the hard disks.

One feature of SoundLink which could only be achieved using a computer-based recording system is recording multiple takes on the fly. You can get SoundLink to loop around a specified record section, drop in and out of record on each pass, and automatically store each take separately so that you can later go back and listen through to them to find the best one. Time-stretching of digital audio is something else you can do with SoundLink, and it works extremely well, too.

"Korg have built another bridge between the MIDI and digital audio worlds by allowing 01/W Songs to be transferred via MIDI into SoundLink and vice versa."

A Session groups all the data relating to a particular recording session, so loading in a Session automatically configures SoundLink for that session - that is, it loads in synchronisation and digital I/O settings, EQ, effects and mix automation, MIDI sequences, internal effects patches and all the pointers to the Sounds and Segments recorded and created on the session. Up to 100 Sessions can be held on the disks, while the total number of samples you can have on the hard disks (spread across all the Sessions) is 2000. When it finally comes time to back up the data - and so free up the hard disks for new work, you can use the Exabyte tape streamer, which uses very cheap 8mm videotape cassettes; an Exabyte backup can store all the data on the hard disks. However, sensible practice dictates that backing up to tape should be done at the end of every recording or editing session.

Onboard effects processing on SoundLink is provided by a scaled-down version of Korg's high-end A1 effects processor - scaled down in the sense that it provides just three programmable reverb effects: Room, Hall and Plate. The reasoning is that smooth operation in the digital audio domain is paramount, and changing between disparate effects could produce glitches.

If you want to patch in any more effects, this has to be done via the digital ins and outs. This means that you can only patch in effects processors which themselves sport digital connections (and, surprise surprise, the A1 does just this).

One of the most powerful aspects of SoundLink is mix automation. You can record fader movements and mute on/off hits (up to 30,000 fader and mute events), and draw on up to 200 EQ and 200 effect send Snapshots, 200 effects patches and 200 digital limiter snapshots, all of which can be placed with great precision into a recording (in fact, to 1/80th frame resolution). A neat feature of fader automation editing is that when you start recording over a section, SoundLink doesn't actually start recording your new fader movements until the physical fader passes over a recorded fader location - therefore avoiding the problem of fader "jumps".

It should come as no surprise, given Korg's involvement in MIDI-based music-making, that SoundLink should have a MIDI sequencer built into it - nor that this sequencer is basically the 16-track sequencer on Korg's 01/W synth with a few extra features which relate to the different environment of SoundLink. Most obviously, you can swap between bar/beat and timecode representations of position in the sequencer; in fact, this ability to switch between time- and beat-based location displays is something which Korg have implemented throughout SoundLink (even on the front panel of the console) in order to allow the flexibility of moving between the audio and video worlds.

More dazzling is a function which not only fits a MIDI sequence into a specified time but also preserves the tempo track by recalculating the tempo changes to fit the new "time frame".

Korg have built another bridge between the MIDI and digital audio worlds by allowing 01/W Songs to be transferred via MIDI into SoundLink and vice versa. MIDI Songs in SoundLink can be Started from any location within the Session; in effect, they're just more blocks of data to be slid around and positioned like the Sounds and Segments. Up to 20 Songs and 50,000 MIDI events can be recorded within a Session. If you want to use a computer-based MIDI sequencer with SoundLink, you can always turn to the MTC output on the console's rear panel and connect up a sequencer like Steinberg's Cubase or Opcode's Vision which syncs to MTC - though this won't provide the degree of integration between MIDI and audio which you get with the onboard sequencer.

Soundlink is no hesitant first step into unfamiliar territory, but a solidly professional product which knows where it's at and knows where it's going - which unfortunately isn't presently into the clutches of MT. I've attempted to do no more than give an overview of the system here, based on an afternoon's encounter with it at Korg's UK HQ. Disk-based multitrack audio recording may still be an expensive business, but it is slowly working its way down the price spiral - witness also emerging new systems such as Digidesign's Pro Tools and Roland's DM80. But rather than make any immediate impact on the lower end of the recording market, SoundLink is more likely to give the likes of AMS and Digital Audio Research sleepless nights. 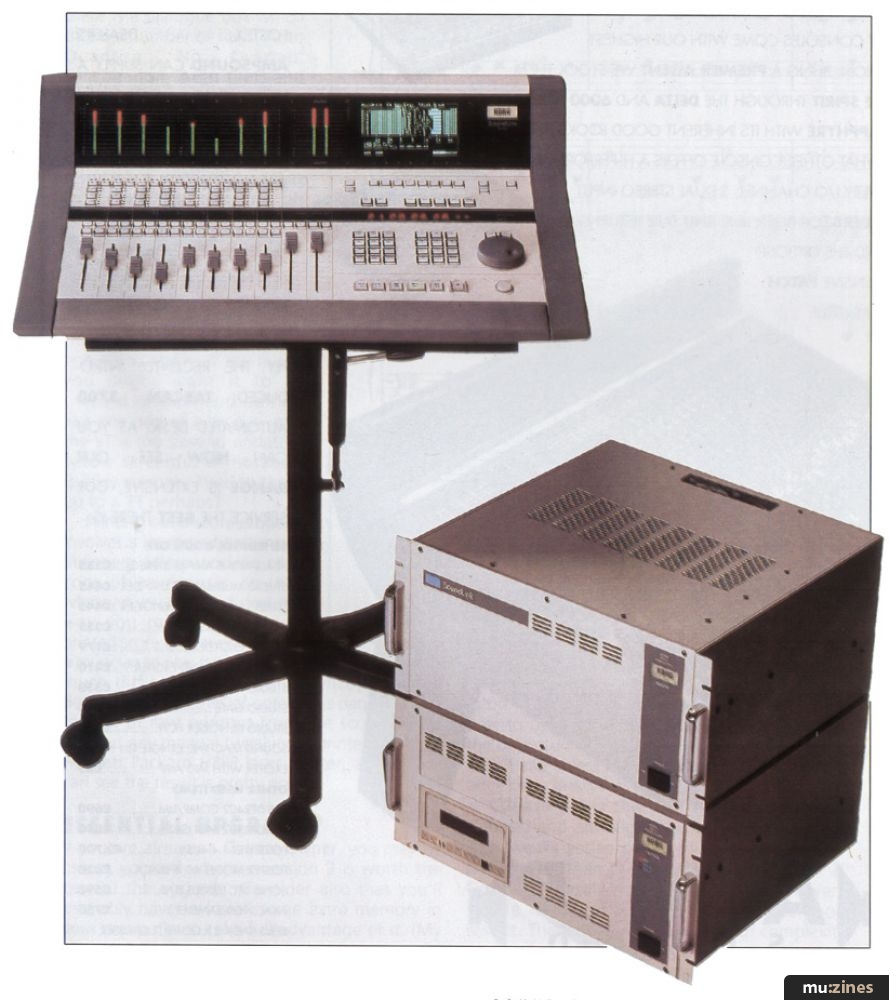