Studio Manager Howard Barrow explained "The studios were originally designed as a service for the (Pye) record company. In fact, we were one of the first of the company studios to encourage 'outside' artists in. This was about ten years ago and, at that time, we were three-track heading towards four. We had artists like the Stones, Sammy Davis and Trini Lopez in regularly. Now, about 50% of our work is with outside artists."

Howard has been with Pye on and off for nine years, having spent two years in Spain where he worked on the "Mozart 40" hit by Waldo de Los Rios, and also worked in the film and television industry where he was involved in films and adverts. He returned to Pye last April and immediately set to work updating the equipment and thereby Pye's image.

"One of the first things I did was to sell the mobile. It's not really financially viable to run a mobile if it's not working all the time. You've got to have five guys with it, and if it's not booked, then they're all sitting about doing nothing."

Howard has plans to upgrade both studios by converting them from 16 to 24 track."We will still have 16 track facilities in Studio One," Howard emphasised, "because some people don't want the aggro of 24 track. Most of our middle-of-the-road stuff is done on 16. As well as converting Studio Two to 24 track, we're also going to re-do the decor so it will be ideal for groups.

"Pye went through a bit of a slack period for a while," he continued, "mainly because of a lack of investment in equipment. Things have changed now, of course, but in the past people were totally unrealistic in planning a studio. They were happy just to make the paperwork balance, so they never made a profit, and therefore they couldn't renew and improve the equipment."

On the subject of equipment, Pye Studios are currently using a Neve 24 into 16 desk with Studer 16 and 24-track tape machines in Studio One, and a Neve 16 into 16 desk with an Ampex 1100 16-track machine in Studio Two, although they are in the process of getting new equipment in. All monitor speakers are Lockwoods with Tannoys driven by Crown 300's, and the microphones are a combination of Neumann, AKG, Sennheiser and Beyer.

"We can also cut DBX as well as Dolby, and the cutting rooms are fitted with Parametric equalisation and a spectrum analyser. By the way, all rooms except Two have Dolby third octave equalisation, so at a reasonable volume, you can hear the same curve at a certain point in each room. This means we don't get people saying 'I don't like this room, it's not as good as the other one.' It's a gamble that's paid off because we can get a reasonable sound without too much aggro."

Pye Studios also make up all the interims for Precision Tapes. "We've got a guy called Kim Shaw who's really into programming and mastering cassette and cartridge duplication," Howard explained.

"I'd also like to emphasise the fact that we have a very good maintenance department," he added. "It's so important. Machinery is so complicated now, you've got to have somebody who knows the ins and outs of it. I can't remember the last time we had a breakdown. I insist that all the machines are lined up every morning and if there's something wrong with one of them, then it's got to be fixed fast. We have a technical staff that can handle it, so we don't have to call the distributor out to mend it."

Pye have always been thought of as a middle-of-the-road studio, but things should soon change when the new plans are completed. "We're going to aim to please everybody. One of the problems is that we are too often identified with the record company. I think also that outside people have been a little nervous about using us, but the fact is that we guard other people's product even more jealously, because a mistake can only happen once and you're finished. We all work hard and so I've no qualms about the future. We can, I feel, always offer a good product at a reasonable price without aggravation.

"If the customer comes in, he wants a good job doing. The time's booked and it's a case of 'You're on, mister'. There's no room for messing about. It's got to be taken very seriously."

According to Howard, the most important thing in the success of a recording studio is professionalism. "It is so important," he stresses. "The main thing is to be in a situation where the customer can walk out happy with what you've done, and happy to have worked here. It's like when you go to a restaurant, you want good food, good service and you want to walk out satisfied. Basically, we are a service industry." 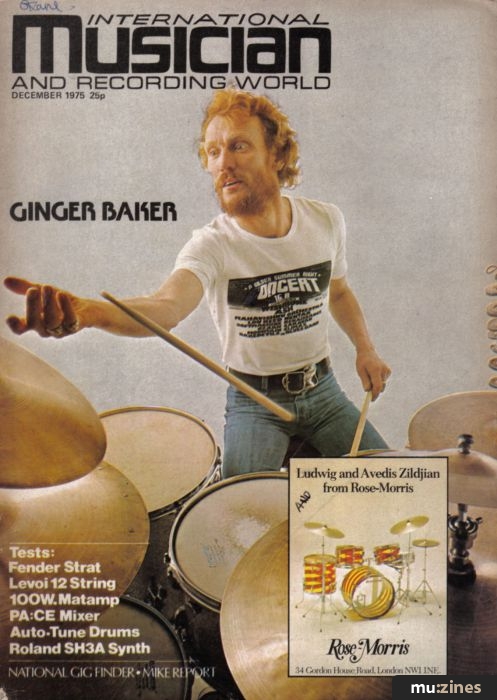