Despite their size, weight, and sheer pose value, portable computers have yet to snare travelling MIDI musicians in large numbers. The first serious attempt at a truly portable music micro appeared back in 1988 in the stylish shape of the Yamaha C1. A PC-compatible, the C1 included four MIDI ports (giving 64 MIDI channels) and dedicated in/out connections for Longitudinal Time Code. Several MIDI software houses developed special versions of their applications that addressed the C1's extra sockets. However, the C1 failed to make an impact, thanks partly to its lack of Atari ST/Apple Mac compatibility, but mainly to its £3,000 price tag.

The C1's premature demise condemned the dedicated portable music computer to the land of vapourware. Today, Atari's STacy is closest to the genre, its single musical qualification being a built-in MIDI port. However, at £1,275 (ex-VAT, as are all prices quoted here), for a 2/20 configuration, the STacy has failed to capture musicians' imagination, a situation that seems unlikely to change with the arrival of the £1,100 ST Book.

The euphoria that greeted the launch of Apple's PowerBooks last year was tempered by their higher than expected retail prices, the lowliest model — the PowerBook 100 2/20 — being priced at £1,375. Since then, PowerBook enthusiasm has continued to slide (along with economic confidence) as several significant facts have come to light Firstly, even a minimally configured System 7.0 (ie. with minimum fonts/resources and all unnecessary extensions turned off) requires 1.2MB of RAM. Most MIDI sequencers require at least 2M, but as PowerBook RAM is only available in 2MB units, 4MB is the absolute minimum. Unfortunately, PowerBook RAM is twice the price of standard Mac SIMMs, at £120 for 2M.

Secondly, despite its 16MHz clock speed (twice that of the Plus/SE/C1assic) the PowerBook 100's 68000 processor makes hard work of MIDI sequencing, and routing via MIDI Manager is tardy beyond belief (assuming you can afford the extra RAM necessary to run additional applications).

As if all this isn't enough, the recently discontinued PB 100 has a rather pernicious habit of ceasing to transmit MIDI data when throughput reaches a certain critical level. In short, the 100 simply cannot be used for serious MIDI applications.

In fact, the 140 and the 170 also exhibit the 100's data hindering tic, due to the PowerBook's need to interrupt the serial ports periodically to check battery status, and its tendency to go into 'sleep' mode when no keyboard tracker-ball/keyboard action is detected for a few minutes. The result is that SysEx data transfers and controller-dense MIDI sequences are continually interrupted. The problems affect hardware too; several MIDI interfaces fail to work with the PowerBooks, including JL Cooper's MacNexus and Mark Of The Unicorn's MIDI Time Piece.

Responsibility for the problem volleyed between Apple and MIDI developers for several months, until last June when Apple came clean offering to fix all future PowerBook ROMs except the 100, which, they say, is simply too slow. (Whether the new-PowerBook 145 suffers from serial port interrupt and sleep mode problems is not clear at the time of writing).

Meanwhile, MIDI software houses have been busy writing updates for their major sequencing applications to bypass the interrupt problem on the 140 and 170. Mark of the Unicorn's Performer, now at V4.0, has been PowerBook-friendly since 3.64. Opcode's Vision 1.4 is in the shops now, and an updated OMS (V1.2) will follow. The latter will also ensure compatibility for Opcode's multi-port interfaces — the Studio 3, Studio 4 and Studio 5 — though only when using the 140/145/170's modem port (the PB 100 has only one serial port — a printer port — and as mentioned earlier, the poor thing simply can't cope). Over in Germany, Steinberg have announced Cubase V1.8.3, and a PowerBook-friendly version of Mac MROS should be available by the time you read this.

PowerBook prices have fallen many times since their introduction last year; remaining stocks of the PowerBook 100 4/40 are being unloaded for £895. However, as we've seen, the 100 is next to useless for serious MIDI work, leaving the entry price at around £1,500 for the 145, the 140's replacement. A 68030-based PowerBook 100 is mooted, and several other new models are slated for October release, so it's possible that a 68030 based 4/40 PowerBook might be available for £1,000 by Christmas or Spring '93. However, unless Apple allow Mac clones, a cheap C1-like PowerBook seems extremely unlikely in the foreseeable future.

Mark of the Unicorn's new MIDI Time Piece II follows hard on the heels of Opcode's Studios 3, 4 and 5, and MOTU's original MTP. The major difference between MTPs I and II is that the latter can also be used in stand-alone mode (ie. without a Mac), thanks to four front panel controls and a back-lit 16x2 LCD. The unit has sufficient RAM for 128 routing configurations and features two programmable footpedal inputs and click to MIDI event conversion. The stand-alone features are intended to put the MTP into live keyboard rigs where a master keyboard can switch MTP configurations via MIDI program change messages.

For the larger MIDI setup, multi-port interfaces like the MTP I/II and Studio 3/4/5 solve the problem of cumulative MIDI Thru opto-isolator data corruption, since they remove the need for daisy chaining. MIDI bandwidth related 'event smearing' is also overcome by running serial ports at their maximum speed. This allows a greater throughput of data, which is then routed to independent ports (and therefore instrument MIDI inputs).

However, most multi-timbral synths, samplers and ROM players have only one MIDI input, so bandwidth event smearing remains a problem. In addition, MIDI response delays of 25ms (or worse) are typical for multi-timbral devices attempting to dynamically allocate 8 or 16 'simultaneous' notes to unique timbres. Fast, multi-port interfaces cannot overcome this problem either; in both cases, the only solution is for multi-timbral instruments to be fitted with multiple independent MIDI inputs (and faster processors). Until then, instrument MIDI response delay — which most manufacturers fail to quote in their specifications — will continue to be a significant source of frustration. 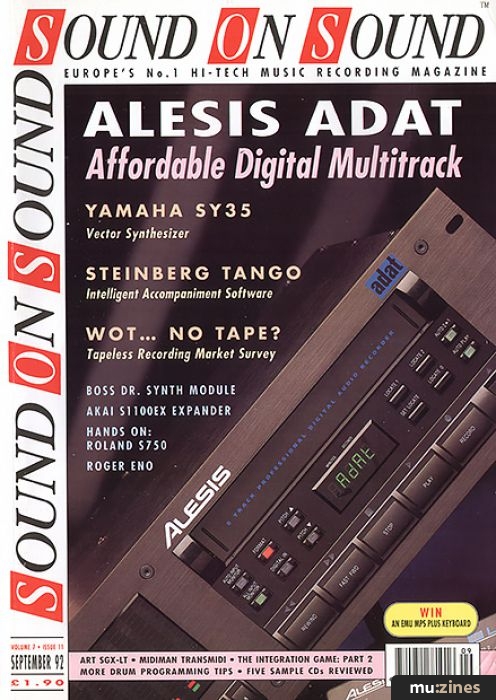