Roger Powell, keyboardist with Todd Rundgren's Utopia, talks to Tony Bacon about the gear he used while guesting on the recent David Bowie tour. 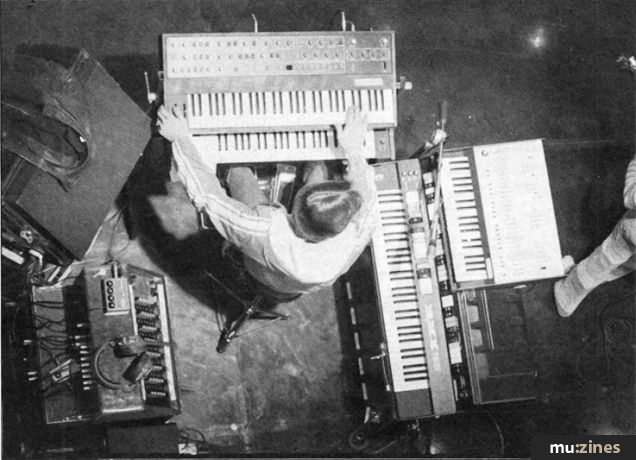 'This (the Bowie Tour) is basically a situation where I can just play, and sort of do what I have most fun at doing, and that's finding new sounds and new timbres to inject.

I listened to tapes and I listened to parts where I knew I was going to have to make certain sounds to preserve the integrity of the tunes, so they would be recognised. Then I selected as few instruments as possible that would allow me to make the most number of sounds — I hate to be encumbered with a whole barricade of keyboards. So I narrowed it down to four instruments, firstly a new synthesiser that's come out called the Prophet (see review in SI July 78 p75), developed by this fellow in California called Dave Smith; his company is Sequential Circuits. He's now only making the 5-voice — he's discovered that it didn't quite have enough room in there for the 10, but I think he may make a dual manual instrument in the near future.

Quite honestly we had a few problems with it at first, but I mean it's the first production run of the instrument. But Dave was very helpful with it and I think he appreciated the fact that I was able to suss out what some of the problems might be, and they've all since been corrected. So, although I got David to get these things, I've managed to get it out of his hands for the summer so that I may use it during recording — he's taken with that.

The initial problems were with the tuning, it has an automatic tuning system in it, using a microprocessor. There are so many points coming in to the oscillators, so many voltages coming in from different sources, that there was a bit of a mis-match or a tolerance of a component in some place that was not quite together. But that was discovered very early and was corrected — now I have no problem at all with it. And there was a little bit of a problem with the actual mechanical casing of it — as you know when you carry something on tour it really has to able to withstand quite a bit. I don't think he was thinking that it would go out on so many tours to begin with — the product has taken off so well that I think he is beginning to beef up the case a little. It certainly is like the most advanced instrument of its kind at the moment.

There are two instruments that I would say are the heart of the system on this tour, there's the Prophet, and I also use an RMI Keyboard Computer, the new one, the KC-II (see review in SI June 78 p71). One interesting sidelight here is that the fellow that sort of heads up that department, Clark Ferguson, was a very good friend of mine, I got him a job at ARP years ago, and then he and I had a house together in Massachusetts. We were discussing ideas for incorporating the Allen organ computer in a small box, and at about the same time as we were talking about this he got a letter saying please come to work for us as we want you to head up this new product line! So I feel like I have something of a hand in that instrument. And it's a marvellous instrument, all digital sound generation — of course, having gone through another generation, it has been the most reliable instrument I have had on the road, never had a speck of a problem with that. Those two things really give me all the sound I need: the Prophet gives me the standard kind of synthesiser kind of sounds that I need and some nice polyphonic voicings, and then the RMI has a totally different sound quality, being digital, and is very good for things like bells.

I don't use too many of their card pre-sets with the RMI. We were using cards on the first version of it, the instrument I had with Utopia is one of the very early ones with the lighted pushbuttons, just called the RMI Keyboard Computer, before they even called it KC or anything. I was using cards there, but through the last year and a half, Clark has incorporated most of those — see, the problem is that the thing was set up originally as a pipe organ, or as a theatre organ, and there weren't too many sounds that were that useful for rock'n'roll purposes. But since then he's incorporated most of the interesting settings, cards and all those various combinations into the presets, and onto the selectable tabs. So I really don't need to use the cards — I have to move around so quickly, I've just learned my combinations of tabs and that's really the most efficient way for me to get what I need out of it.

So I have those two instruments, and David already had an ARP string machine and an ARP Odyssey. Another interesting side note — I helped to design the ARP Odyssey when I was working at ARP from 1970 to 1973. We developed the Odyssey out of the ARP 2600 that I had had specially modified for myself — so it was fun for me to re-confront the Odyssey. I still want to say that I'm using Moog equipment because I'm loosely affiliated with them at this point — I have a lot of their equipment in my own studio which I still enjoy using very much. But David already had these two instruments and I did need a string machine; it's working out very well. So I only have those four instruments on this tour.

Then I have a processing rack, which has two dbx compressors, one is processing the signal going to a Roland Space Echo so that I don't overload it, and the second compresses everything before it goes to the final amplifiers, so that if I play a couple of keyboards at once it doesn't overload. It gives a kind of punchy sound to it which is very nice. I also have two stereo graphics: one is a Soundcraftsman, the other is the new Technics — sort of a combination parametric and graphic. It has graphic controls, but then beneath those band controls is a concentric rotary knob, dual knob, which can move that particular frequency up or down. The other knob will either sharpen the cue, or spread out the bandwidth, so it's like a combination of graphic and parametric — very useful. I found that either of the two works well, I put these things in the rack and I haven't actually been using a couple of channels because I found that the straight sound of the keyboards seems to be alright. But sometimes I like to equalise the RMI, or the Prophet sometimes needs to be eq'd, just because of the particular response of the oscillators or filters — generally I find I use a little midrange boost on everything.

They would be feeding my monitor and the PA — alternatively I could just have equalised my monitor. The monitor that I have is made by this company called Elephant Keyboards, and they ran out most of the sound monitors on the stage to David, and they do the technical set-up for that. My monitor is like a Leslie type cabinet but it's their own fibreglass-covered wood cabinet with somewhat larger horns and drivers — there's a Yamaha power amp that's bi-amping the horn and the low-frequency end. The cabinet seems to have a little more response, and 'oomph', a little more power than a standard Leslie — although I don't use the rotating effect because I'm going directly out to the board from my set-up and it's split off to go to the monitors, so if I used the Leslie it'd just be for my own effect. Besides the fact that I have an Eventide Harmonizer and Flanger also in the rack, and then I have a mixing console which allows me to send any of the instruments to any of the effects and bring any of the effects back in any particular mix that I want. And I do rely rather heavily on some of the processing, especially the Harmonizer for some of the more spectacular effects.

I never really made much distinction between the processing and the actual synthesisers — it's just really all one, and they're all necessary to get the sound that I want — I 'play' the Harmonizer as much as I 'play' the synthesiser. I have a lot of designs for instruments that are essentially synthesisers, but they're sort of expanded synthesisers with all of this processing stuff actually contained in the instrument itself.' 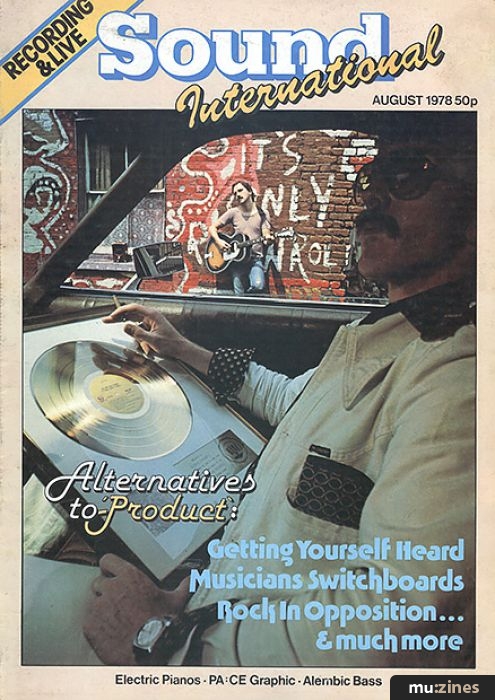