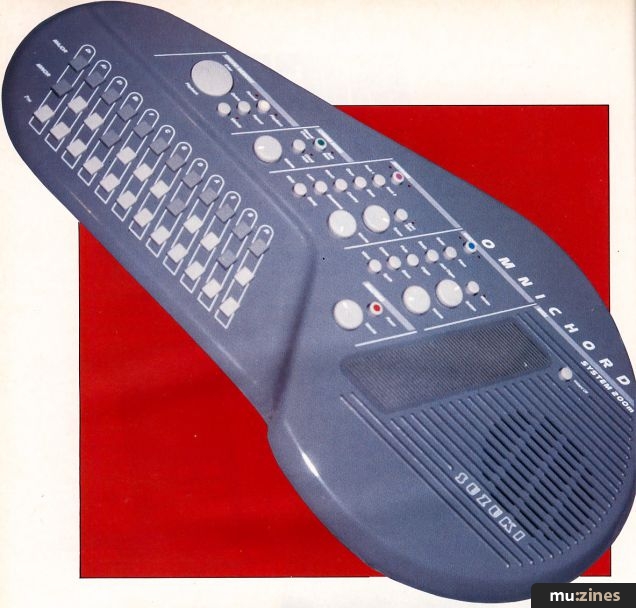 Some keyboard players can tell a D Flat Seventh from an A Sharp Minor without batting an eyelid. Some, have to dig out the old chord book to work out how to play a C Major, and as for playing it on a guitar, you might as well ask me to play it with my foot.

I suppose that explains the popularity of "home keyboards" with single-finger chord facilities. Recently, manufacturers of more hi-tech instruments have started adding similar facilities to their keyboards; for instance the new Roland D-5. The Suzuki Omnichord, though, takes the whole "easy-play" concept to hitherto unknown heights. It doesn't just make chords easy - it actually won't let you play a wrong note at all!

The original Omnichord has been around for a couple of years, but is best known in the educational market (although I have seen buskers on the Underground using them!). A better-known Omnichord player is Daniel Lanois, producer of U2's Unforgettable Fire LP.

The new Omnichord, the 200-M, is almost identical to the original, except that it now has MIDI facilities and is finished in grey rather than beige. For those of us who have been waiting with saliva dribbling from our mouths since it was previewed at last year's Frankfurt Show, the 200M lives up to all expectations.

The Omnichord is designed to be played sitting in your lap, or maybe slung around your neck (the finished version will probably have strap hooks). It can be powered by batteries or an external 12V power supply. The strange shape reminds you of nothing more than an artist's palette, but the facilities are just like those you might find on a Casio or Yamaha home keyboard. On the right is a small but adequate speaker; alternatively you can use the quarter-inch jack audio output on the side. There's a master volume knob, and separate volume controls for the bass/chord, voice and rhythm sections.

The Omnichord is basically an accompaniment instrument, not a melody instrument. On the left are 36 chord buttons, divided into three rows; majors, minors and sevenths. Switch on and press a chord button, and you'll hear the appropriate chord played using a simple organ sound. The Chord Hold button determines whether the chord continues to play after you release the key. You can combine certain buttons to create a total of 84 chords. At the same time, if you have Sync Start switched on, a rhythm pattern will start.

The Rhythm section features twelve drum patterns using PCM-sampled sounds. Though the lack of fills or variations in the patterns makes them a bit monotonous, the basic sounds and arrangements are good, especially the Latin and Rock 2 patterns. The tempo control is also in the Rhythm section.

If you have Auto Bass selected, the chord accompaniment will "vamp" and you'll also hear a walking bass pattern in the same key; again, the sound is a bit "home organ" but acceptable.

The Omnichord's unique feature is the Sonic String section. Just run your fingertips along this strip of touch-activated sensors and you'll hear a sparkling four-octave glissando of sounds in the appropriate key. The twelve voices available in this section are a bit more imaginative; tinkling Vibes, full Brass and Organ, plucky Guitar and Banjo among others. A Sustain knob and Vibrato button allow you to further alter the sounds to your taste.

By strumming, tapping and striking the polyphonic Sonic Strings section with the right hand, as you choose different chords with the left, you can create a complete composition without ever hitting a wrong note. For the terminally lazy, you don't even need to play a series of chords; the Omnichord can memorise them for you. Up to 51 chords can be entered in sequence, by selecting Record in the Chord Memory section, pressing the required chord and then Enter. Make a mistake and you can delete the last chord. In performance, just select Playback, and tap the Enter button (or the optional footswitch control for which there's a socket on the back) each time you want to advance to the next chord. Simple!

You can also place markers in the sequence of chords which indicate the start of a new song. In Playback mode, press one of the dual-function chord buttons, and the Omnichord's memory will jump straight to the start of your next marked song.

As you step through the chords you can play along by strumming the Sonic Strings, or switch on the Melody function and pick out a tune on the polyphonic one-and-a-half octave keyboard laid out among the chord buttons.

With the sounds of a synth and much of the playability of a guitar, the Omnichord would be great just as it is; but the addition of MIDI makes it even more versatile.

On the side of the 200M is a single MIDI OUT socket - no IN, no THRU. The MIDI implementation is pretty primitive too; the melody line output is fixed on Channel 1, chords on 2 and bass line on 3. The rhythm sounds don't output on MIDI at all, and irritatingly there's no MIDI clock output either. Although this is a prototype, the finished article probably won't feature a more complex MIDI spec; certainly nothing swish like patch changing, velocity response and so on. You'll find, though, that the Sustain and Vibrato controls in the melody section do in fact affect your MIDI sound source.

So plug in your synth (a multi-timbral module with bass, chord and melody voices assigned to the appropriate MIDI channels is obviously best), turn down the volume of the Omnichord's own sounds and play away, and you'll hear an amazing one-man accompaniment section from your synth module.

For people who could never pick up the guitar, this is an amazing opportunity to achieve guitar-like effects from your synth. After all, although you might have the world's best sample of a guitar, you can't "strum" a keyboard in the way you can a set of strings, so the result is never going to be convincing. With the Omnichord, though, you can play any sort of guitar-style chord patterns with ease, and you could of course record the results into a sequencer for later use.

Because I don't regard anything as cheating so long as the musical results are good, I'm head-over-heels about the Omnichord 200-M - apart from being a useful songwriting and accompaniment instrument, it's an unique and useful MIDI controller which might well change the way you go about making music. 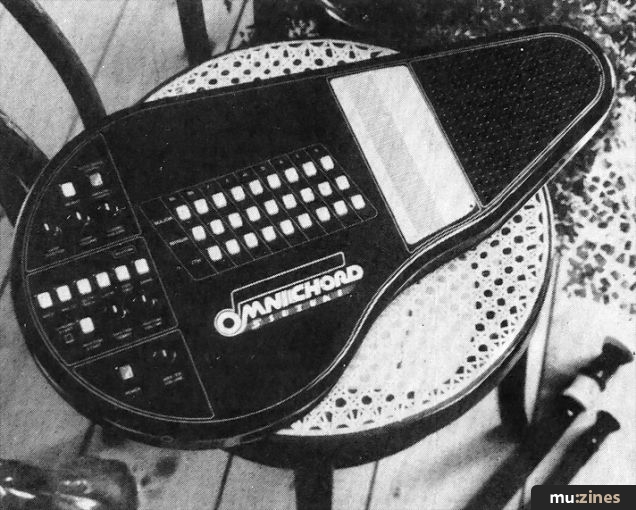