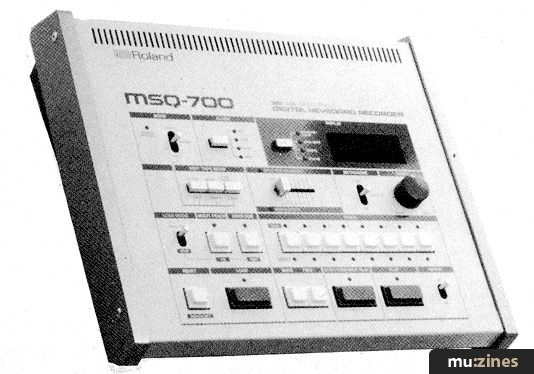 While lurking in the corridors of Cambridgeshire's Spaceward Studios looking for POP STARS to rub myself against, who should I bump into but onetime One Two correspondent and non-Eurythmic Dave Stewart. At the very mention of our esteemed journal-in-common, Dave's eyes lit up and he began waxing lyrical about his new digital sequencer, the Roland MSQ700, the latest addition to his arsenal of keyboarderie.

"Tell you what," Dave said, ignoring my pleas of ignorance, "why don't you review it?"

Two telephone calls and Bank Holiday later, Dave and I sat down in front of his synths and ran through the functions of the MSQ.

"Basically, it's a MIDI sequencer. It records, stores, and plays back information from MIDI keyboards, including such fiddly bits as touch sensitivity and timing. Playing back enables you to drive several keyboards through the MIDI (up to 16 according to Roland's man) handling up to eight different parts.

"I've always wanted a sequencer that would just play back what I improvised, with all the timing preserved; this will do that, and reference it against bar lines when you play it back. It does this by means of an audible metronome — a sort of electronic tick-tock that indicates beginnings of bars and the regular beats themselves. It's unobtrusive, but you can still hear it through what you play, and you can always turn it off.

"The MSQ is simple to use: set a bar measure — say 4/4 or even 5/4 if you're Dave Brubeck — select one of its eight channels to record onto, move into 'Load' mode, and start playing. It gives a count-in of eight beats to set the tempo, and you're off. I had a micro-composer here, an MC4, and I spent about a month cursing and nutting it, just trying to get the hang of it. It was so slow, it just made you forget what you were trying to do. They're great for methodical people who want to write one note at a time, but for those who are more interested in just playing, the MSQ700 is much quicker, and easier."

The machine resembles, both in size and colour, the TR909 drum machine. Its rather pleasing smokey-grey metal casing is punctuated by a large bright LED window and an ergonomically satisfying array of dual function knobs. It has eight separate channels on which to record sequences, either in real or in step-time, depending on the flexibility of your fingers. Tell them, Dave...

"Once you've played your sequence/chord pattern, whatever, and checked through it, you often find that the timing is a bit dodgy. Here you use the autocorrect facility. This mode enables you to dictate the length of the beats in the bar, from half notes down to 1/32 notes, which gives a fair degree of expression while making sure you're in time. To autocorrect, you have to copy your pattern from one track to another; the LED will flash up 'Corr.' and the corrected sequence will be written into the new track, now completely in time.

"This mode can be interesting to use on random patterns. Even if you play a load of old rubbish, you can autocorrect it to sound totally different. It's a new way of finding things you hadn't previously noticed in what you were playing.

"Obviously, this only applies to real-time recording. With step-time, you build up patterns note by note, adding rests or ties (as Roland call them) to slur notes together — just like sheet music really.

"The MSQ700 enables you to overdub yourself too. If you want to play along with the first track, set it to 'overdub', listen in to the original, and record the new part on another track. If you like the two together, you can then merge them, by bouncing down onto a third track. As it's digital, you don't lose any quality — the point being that you don't record the sounds, only the information that makes the keyboards play the sounds. The only limitation to this bouncing/multitracking process is that imposed by the synthesisers. I use a DX7, which is 16-note polyphonic; if the MSQ exceeds that, the DX7 simply leaves notes out.

"You can record different parts on each of the eight tracks, and then link them together in any way you want. They can play simultaneously, individually, or be chained together to form a longer piece. The memory holds 6500 notes or 'events', which is plenty — I've never managed to use it all — and it can be apportioned between tracks any way you wish. You're not limited to a certain amount per track. The LED display lets you know how much you've used. It also tells you where you are in any chained piece, indicating track and bar number.

"You can only chain together one song at any particular time, though. You can't just link tracks 2, 3 and 4 for one song, then start another with 6, 7, and 8. You have to dump the information for the first chain onto tape in order to preserve it. This is supposedly simplicity itself since Roland have provided a test/verify capability, though I've had trouble getting the program to verify itself.

"I tend to use the chaining system to help build up songs during composition, so I know that the chorus is there on track 4, and the middle eight is there on track 6, and the verses can be swapped around in the patterns between. But I am a lazy bozo.

"You can write whole songs into each track, but that takes time in getting it right.

"Which brings me to my first complaint — there is no proper edit function. You can drop into a song to correct it, but you can't drop out again, you have to carry on playing from that point to the end. Roland have omitted the insert/delete capability, which is a nuisance, particularly when you get to the end of a long piece only to discover a bum note in the third bar.

"The only other problem I've encountered is in the Memory Protect mode. Apparently, you should turn this on to protect treasured programs in the MSQ before switching it off. It does this OK, but when you switch the Memory Protect itself off, it automatically wipes everything it was retaining. Maybe it's a fault of my machine, but it seems a bit daft not to be able to gain access to the information you've kept. Back to the tape dump, I suppose.

"Talking of tapes, the MSQ has a tape sync code, as well as a clock input (for drum machines), and a MIDI clock, which means you could synchronise it with just about everything.

"The manual's good, too; none of those awful, stoned Californian jokes (like the Drumulator) which is the last thing you want when you're in that mood of quiet desperation which drives you to consult the book.

"I thought when I bought it that it was a lot of money to pay for something I can't really use live — partly because it can only readily play one song, and only two keyboards out of my usual four or five set-up have MIDI. Nevertheless, the MSQ700 helps me write music, which is the most valuable thing it can do. I work best when I don't think about what I'm playing, therefore I can sit and waffle on, knowing that what I play will be preserved. And I can use step-time to make me play in rhythms I don't know about until the MSQ plays them back. You're always finding things you didn't know were there." 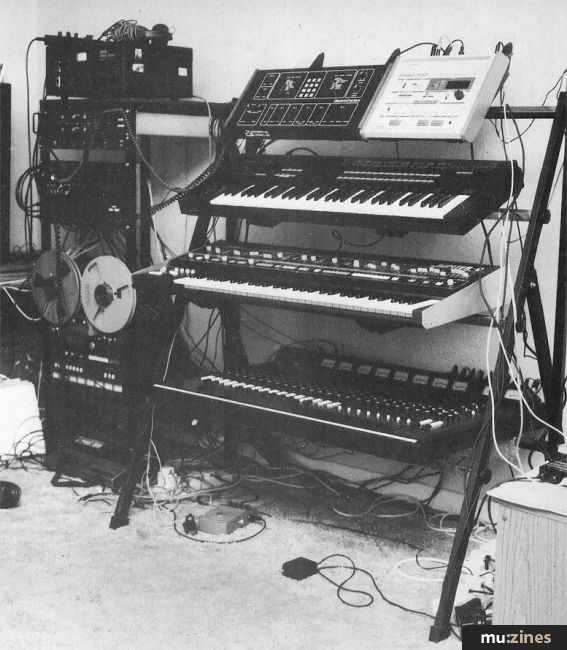