Report on London's newest and most futuristic recording studio

Recording studios are born for all sorts of reasons. Most are set up as an exercise to make money and are run by people who like recording, but are principally interested in making a profit. Some exist as legal tax evasion exercises for the super-rich super-stars and a few exist in a service capacity as in the case of record company house studios.

The Roundhouse Studio is a little of both the first and the last, and a great deal more that is aside from the usual reasons. It's the studio arm of Bronze Records, the mini-empire that Gerry Bron has created — more than a little around Uriah Heep's worldwide success. The label flourishes and because Gerry is first and foremost a producer, it was an obvious step to set up his own studio, both to record the house acts and to be available for hire. 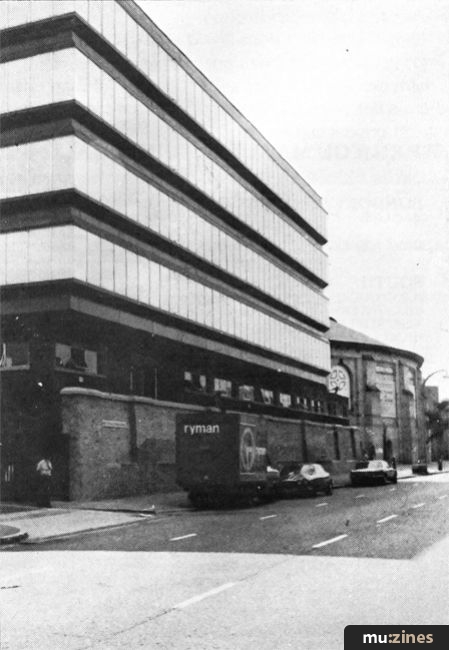 In charge of the day-to-day running of the studio is Peter Gallen, a studio manager who has served his apprenticeship in the time honoured way. For over five years he was a balance engineer at Lansdowne Studios and he arrived at Roundhouse through a long standing association with Gerry Bron.

"I did most of the Uriah Heep albums with Gerry," said Peter, "And towards the end of my time at Lansdowne I was working almost exclusively on Bronze artists".

In addition to his work as a balance engineer, Peter has also worked in the producers chair and he naturally has gained an understanding of the needs of producers as well as the needs of engineers. The artists that Peter has produced included Osibisa and Ken Hensley.

"Our aim in building this studio is to create a producer's studio rather than an engineer's studio. We made a point of laying back the technical aspect of the studio, although we believe we are as technically advanced as it's possible to be at the present time. Many studios open with grand announcements about their highly sophisticated technical specifications, but we prefer to keep the technical aspect in the background and just provide a comfortable atmosphere to work in".

Atmosphere is something that has been considered very carefully at the Roundhouse Studio. Most studios concern themselves greatly with the installation of the desk and machinery and then when it comes to the final decoration, scatter a few spotlights and chairs around and believe that they have taken care of everything. Gerry and Peter approached the problem differently.

"The studio interior decor has been designed by John Page of Charles Page Interiors because Gerry felt that the way the studio looked was vital". Describing the job done by Page as interior decor is something of an insult. The decor is built into the studio. Despite being over-worked, the terms, futuristic and ultra-modern are really the only way to describe the decor. All corners have been rounded. That means all windows are rounded, that all doors are rounded, that means that Cadac had to build special monitor enclosures that had rounded corners — the cost must have been staggering.

No official statement about the cost of building the Roundhouse Studio is available, but rumour puts the figure at around £250,000, a sum which a visitor is prepared to believe. 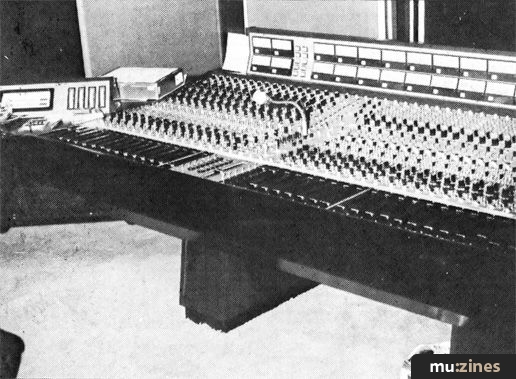 Epic Record's boss was visiting the complex at the same time as International Musician and to quote him, "The only thing to compare to this is Caribou" (the Ranch studio in the Colorado Rockies beloved by Elton John and others).

The non-music facilities are as impressive as the technical spec. There's a large rest area outside the control room (despite a huge control control room that could possibly absorb 20 people without seeming full) which is fitted with a colour TV. There's a kitchen at the disposal of producers, artists and their staff which has a giant freezer and a micro-wave oven. So steaks at 3am can be on the menu at minimal cost as well as any drinks required.

"This is what we mean by making this a producer's studio. It's a studio that makes his job as easy as possible by keeping everybody fresh and presenting artists and producers alike with a minimum of hassles in getting sounds and also in getting something to eat".

The main studio is capable of taking around 40 musicians comfortably. The studio has mains outlets of 220 and 110 volts and it incorporates an unusual fold-back box.

More than anything else in the studio itself, the inability to hear each other in the cans causes hold-ups for musicians. Roundhouse provide a small mini-mixer headphone box which allows a musician to mix his own foldback. If more than four instruments are going down at one time the engineer can send any groups required to the four faders in the fold back box on the studio floor.

In the control room the main impression is one of space. "The reason that our opening was delayed for several months is because we were working on the control room. I feel very strongly about control rooms and most of the ones I've worked in have been bad. In this room I think we've created absolutely flat sound round the entire room.

"So many controls are so bad that the engineer and the producer are actually hearing different things, so when the producer asks for more bass the engineer thinks he's mad because he can hear plenty of bass. We wanted to achieve a uniform sound wherever you are in the studio and I think we've managed to achieve that. We've chosen Cadac monitors because they're the only flat monitors I've ever heard. We may not be right, people may not like a truly flat sound, but at least if they record here they will know they are hearing it as it really is.

Cadac have certainly been favoured by the Roundhouse. The desk is a massive Cadac console. "Cadac have the most flexible system we've come across. The equalisation is very good on each channel and for that reason the amount of off board equalisation is cut down to a minimum".

Studer machines are used throughout. The main workhorse is a 24 track and all reductions go into 2-track Studers. A 16 is expected to arrive shortly. The monitoring is by Cadac power amps and Cadac enclosures. Peter's main assistant is engineer Ashley Howe (also Lansdowne) and assistant engineers are Mark Durnley and Trevor Hallesy. Technical engineer is Pete Osborne. 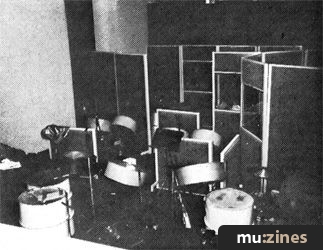 Despite the newest studio in London,the Roundhouse Studio already has plans to expand. Their connection with the Roundhouse itself ("there is a small financial involvement by the Roundhouse Trust") is one that works to their mutual advantage. The studio is housed in the basement of a newly completed office block, and just beside the Roundhouse (the Bronze record company occupies a floor of the building).

Peter Gallen is currently wiring up the Roundhouse itself for recording, using their main control room. At the back of the office block is a large building built as a rehearsal room by the Roundhouse and the studio is also wiring this for sound. Eventually the Roundhouse studio will be the first studio in London to be able to offer an important London venue to recording artists and the "live" recording possibilities are endless. For once the restrictions of a small mobile control room could be lifted and the Roundhouse could be the perfect recording venue for artists who feel that the addition of an audience is a vital ingredient in their recording.

"I think the arrangement will work very well for us and for the Roundhouse. Obviously it will be perfect for them when they want to record something that is being produced and it's obviously a perfect venue for us to use".

The Roundhouse Studio is much more than just a control room and a studio. It will soon become a highly sophisticated recording complex that features two main recording studios and a major London venue among it's facilities, while at the same time remaining the most attractive and comfortable studio in London.