It's just another month in the diary, exploding monitors and mains fuses

The memory of their faces returns to me. Honest, grimey faces, tempered by long hours of thankless toil. Strong, clear, faces that showed the certainty of those who have endured the unendurable; those who have recorded MacDonalds jingles in silent abiding; who have travelled miles across early morning London, braving the wind and rain on a rescue mission to some god-forsaken studio, just to find that they had the input plugged into the output, and that they were too smashed to play anything musical anyway. The unheralded heroes of Marquee Electronics — what a way to earn a living.

Some time next month work will begin on the much publicised reconstruction of The Marquee club. All well and good, the place has been around for 22 years and has broken more bands than Billy Connolly's broken wind. It deserves to be rescued from its fate as a dingey black hole. But what about the fate of the adjoining and rather excellent Marquee Studio? Even as late as June there was still much confusion amongst employees and there had been no definite word from the management. It may possibly be temporarily re-sited until some time in 1987, but everyone at the place was keeping strangely schtum. As if anticipating the imminent carnage, producer Steve James decided to set fire to their MS-10 monitors. The man responsible for the production of innumerable Toyah and Peter Skellern albums, not to mention The Rutles, was in working independently with a band called Facade with house engineer Andy Lovell at the controls. Apparently a drop of DC got on the line and, woof! The MS's burst into flames; without warning. Be careful out there. On a separate occasion, the club and the studio were linked one night to record the live performance of 20 flight Rockers for a live album on WEA. There was no producer as such but engineer Gerry Barter was in charge.

In a similar way, Wave Studios in Hoxton Square have been linking their 24-track studio to their Bass Clef club below it. Such connections have given birth to a number of Big Band recordings for the BBC and an Afro/Latin compilation album called Afro-Latino At The Bass Clef. In the studios (they have two 24-tracks) they've had Gene Loves Jezebel doing an album for Beggars Banquet engineered by Bill Buchanan. Also Courtney Pine, has been in laying a few tracks for Island Records with Martin Giles engineering. Plans are apparently afoot to completely update the lesser of the two studios located on the upper floor of the building — maybe even digital multitrack, but nothing's definite. Plans for an upstairs teaching centre have been put on ice temporarily while studio owner, Peter Inds, concentrated on the studios and club all of which he now owns 100%.


Meanwhile, many miles away from the street credible grimness of London's East End, amid 50 acres of Oxfordshire parkland, Manor Studio has been playing host to Jethro Tull, and Ian Anderson has doubtless been standing about on one leg playing a flute and singing like a fevered mongoose — or so I imagine. The facts are that the band has been recording a single for Chrysalis with producer David Palmer and engineer Robert Black. Before that a German band called Alphaville (Remember Big in Japan?) was in mixing an album with Pete Walsh producing and Steve Chase engineering. If you thought that was a silly name (quite possibly it is), before Alphaville Do Re Mi were in laying down a few tracks for Virgin under guidance from producer Liam Hentschel and with American engineer, Don Wershba (just 'Don' will do) at the controls of their nice new SSL console. Continuing last month's look at how the other half live, I can tell you that guests at Manor are able to enjoy the delights of a heated pool, a table tennis room, a pool room, a games room, a tennis court, fishing in the nearby lake or river and if that's a bit knackering, they can retire to one of the eight double suites or get the resident chef to knock up a Cordon Bleu snack or two.

Elvis Costello was in for a morning at Eden along with Jimmy Cliff recording music for a new film by the director of Ghostbusters. They were joined by a 16-piece TV crew intent on blowing mains fuses by hooking up millions of watts of lights and generally getting some shots in the can to cut with excerpts from the film to make up a convincing trailer. In the afternoon of the same day Midge Ure was re-recording the backing track of his latest single for performance on some future TV programme — title unknown. He too was followed by a hefty German TV crew looking for an interview for some future German TV programme. This is what we like to see, the TV and Music industries in perfect harmony. 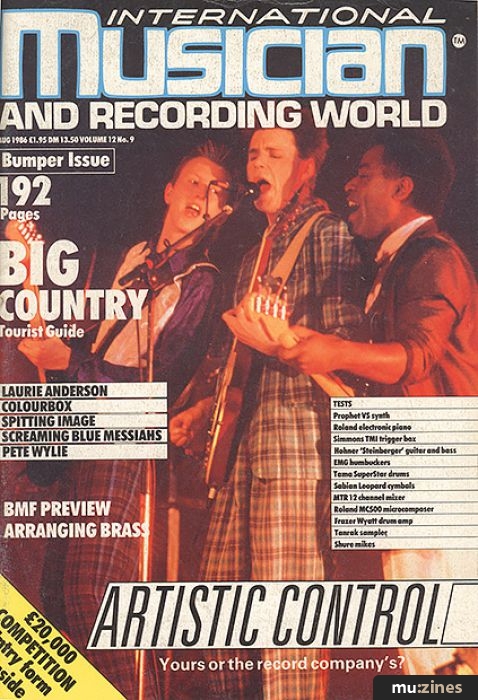