Ok, own up, how many of you can read music? I see, well for those of you with your hands in the air, you might like to turn back to the sequence page and start again, as what follows is strictly for them that don't know a crotchet from their elbow.

The aim of this new monthly series is to guide you through the basics of music notation. It will, hopefully show you that reading music from a score, translating and transferring it to a sequencer is not as difficult as it might at first appear, once you understand the ground rules.

The series will not be going too deep, the aim being to get you started. Once you get the hang of things you should be able to go on and program music with the aid of a theory book. I would recommend an inexpensive little red book called Rudiments and Theory of Music published by The Associated Board of the Royal Schools of Music as a very good partner when programming from music.

So, I hear you say, we have a clever dick who is about to bamboozle us with his degree in music! Not so. The only music lessons I've ever had were at school, which was in the days when the word Moog was an incorrect spelling of a state of well being! When I entered into the world of sequencing some years ago, I could play keyboard by ear, but could not read music. After some time I found that this inability was a drawback, so I raided the library for music theory books and armed with these, and a sequencer did a six month DIY course.

I causally mentioned the above to the editor who had the bright idea that I could write a series to help those of you that, at present, are unable to read music notation, but might like to learn at least the basic concept. If nothing else, this series of articles should give you an insight into an area of music that you may not fully understand at present.

The staff (singular stave) is a set of five horizontal lines with four spaces in-between. It can be thought of like a graph, pitch being represented vertically and note length horizontally. Notes are placed either on the lines or in the spaces. In piano music there are two staves situated one above the other. The uppermost stave contains notes that will normally be played with the right hand, while the lower stave contains the notes for the left hand. Now if you think about this, it is obvious that the notes played with the left hand will be lower than those played with the right, so straight away you can appreciate what note area each stave deals with.


Figure 1 shows the upper and lower staves with middle C located in-between. Middle C is situated roughly in the middle of a piano keyboard, normally adjacent to the keyhole! As there is no line in the gap between the staves the note to be placed on what is called a ledger line, but more of this later.

Music notation uses the first seven letters of the alphabet A-G to represent the pitches of notes in ascending order. A note is represented as a small oval character placed on a line or a space. It is customary for notes that are written in the top half of the stave to be turned upside down so that the stems point downwards, thus making them easier to read.

Referring back to figure 1 you will notice that there are two other symbols, known as clefs, placed on the staves. In order to anchor the pitch of notes the Clef sign is used and placed at the beginning of a stave. The treble clef indicates the position of 'G' on the uppermost stave while the bass clef indicates the position of 'F' on the lower stave. With these two signs it is now possible to determine the pitch of notes placed anywhere on the stave.

The two staves each containing five lines are effectively bound together as pitch has to transcend from one stave to the other. Originally there was an eleventh line running between the two but in more recent times this has been omitted to improve clarity. The missing middle line corresponds to middle 'C' as mentioned earlier.

The effective range of the two staves is about four octaves and as such is obviously not sufficient, so small horizontal lines called ledger lines are used to place a note on or above when the pitch falls outside the range of the staves.

The word octave is the term given to a group of eight notes. As only seven letters are used for pitch notation, these are repeated across the pitch spectrum. If you start on A and go up (or down) to G brings you back to A. The word octave is also used to indicate the pitch of a note and it's location on a keyboard. For example middle 'C' is referred to as 'C3' while the 'C' of the octaves above and below would be 'C4' and 'C2' respectively. As a matter of interest the MIDI range of octaves usually goes from 'C0' to 'C8'. There are exceptions, Steinberg software uses the German method (I wonder why?) which depicts the octaves as:- 'C0-C0-C1-C2-C3-C4-C5-C6.

On a keyboard the smallest distance between two notes is called a 'Semitone'. SEMI being Latin for half. 'Not a lot of people know that!' There are twelve semitones in one octave. A semitone is the distance either up or down between two notes irrespective of what colour they may be.

Now would be a good time to sit down at a keyboard, providing you have one! Play a scale of eight notes (remember the octave?) starting at middle C and go up to the C above it. This should sound quite pleasant, now do the same again (using only white notes) starting on D. This should sound rather different. If it doesn't then may I respectfully suggest you try the new and exciting sport of 'Underwater hang-gliding instead? Ok, so some of you are possibly ahead of me! Try it again, but this time play notes D, E, F#, G, A, B, C#, and D. Now that sounds more like a scale?

You have just played a scale in the key of 'D' major. To make the scale sound correct you have had to play two sharps (F# & C#).

You will see that there are two sharps in the key of 'D' and they sit on the staves at 'C' and 'F'. Now try a scale starting on 'E'. You should have played E, F#, G#, A, B, C#, D# and E. Figure 5 would indicate that you are in the key of 'E'. Now try a scale of eight descending notes starting on 'F'. You will find that you have to play a 'B' flat rather than an A# to complete the scale because this is the key of F major and figure 5 shows that it has one flat (B). Now try the remainder of the key signatures shown in the chart.

It's a good idea to practice scales (preferably using headphones) as although mundane and boring, playing them helps you to appreciate the intervals of different key signatures.

The term 'Accidental' is used to denote flat, sharps or naturals not contained in the key signature. An accidental is written directly before a note and only applies to any notes of the same pitch within that one bar.

There are occasions when a score calls for a double sharp or flat. Such accidentals can be looked at as simply raising or lowering the pitch by one whole semitone than originally set by the time signature. Fig.7 Shows the symbols used.

In a nut shell, if a piece of music is written in the key of 'G' (using one sharp 'F') and at some point in the score there is a natural sign (accidental) in front of an 'F' it simply means that the 'F' returns to it's original pitch ie, natural (not sharp or flat). An accidental sharp placed on a subsequent note of the same pitch would return the note to that of the key signature thus cancelling the natural.

I will always remember the first time I came across a note shown as a 'C flat'. I thought for a minute that I'd gone loopy. The I found a 'B sharp' and knew instinctively that it was time to turn to my little red book. The occurrences of such notes tends to be rare, but at least you have been warned!

This is the term used when a piece of music is moved from one key to another. It has the effect of raising the whole piece of music either up or down a number of notes. A change from a major key to another major key does not have any great effect. However, if you change from a major to a minor key or vice-a-versa this would have a very pronounced effect as the arrangement of the note pitches would be changed.

In next month's Take a Note I'll be looking at the values of notes. 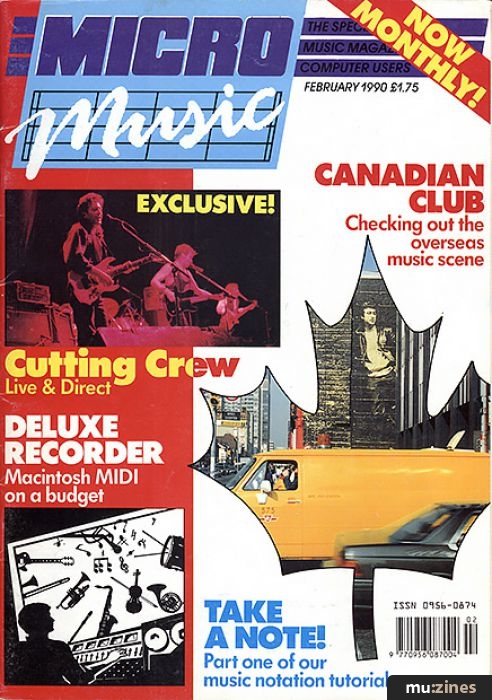