One Two Testing - Feb 1984 There must be one somewhere

One Two Testing - Feb 1984 There must be one somewhere

Up in lofts, under beds, lurk the sort of guitars which collector Paul Day loves and which others dismiss as rubbish. Tony Bacon comes round to his way of thinking.

If you'd like a strange oldie identified Paul Day will have a better chance than most of helping. Or if you're interested in featuring something weird on the next video, write to Paul Day, c/o One Two Testing, (Contact Details).

Anyone can collect Gibsons and Fenders. Well — anyone with a large cache of dosh, that is. Devonian collector Paul Day, however, goes for the rubbish which everyone else ignores. And he's set himself a maximum price tag of £50 on each acquisition, this limit having stuck for most of the eight years he's been collecting what he describes as "weird oldies".

He's currently got well over 250 instruments, everything (everything!) from an Ampeg-Burns NuSonic to a Zenon three-pickup solid, ranging in age from the late 1950s to date, but concentrating on the 1960s.

Paul's also the author of "The Burns Book", published in 1979, a fanatic's guide to the output of British maker Jim Burns. Consequently there is a large selection of Burns guitars and basses in the collection which Paul found it hard to refuse as he was putting the book together.

Indeed the most he's paid above the self-imposed 50 quid limit (broken only in emergency) was for a rare 1961 Burns Vibra Artist Deluxe — he ended up paying about £160 for this. "Of course," he points out, "this is nothing in terms of more conventional vintage guitars. My main criterion for what I pay is the original retail price. So if in 1965 it cost 45 guineas I'll pay about £50 now. These instruments aren't in line with inflation — there's no demand!"

Some prices have a habit of creeping slowly up as Paul sniffs around, and he finds his interests shifting even further down-market (if that's possible). "Below the Burns level in some people's eyes," he says of his latest area of activity. "What I want doesn't get advertised. The Japanese early-to-mid Sixties stuff is what I'm looking for now, the pre-copy era: Teiscos, Guyatones, and so on."

A lot of his guitars now come from Europe, America and Australia — old sources in the UK seem largely to have dried up. "This sort of instrument used to be dead give-away junk shop fodder," explains Paul, "but junk shops don't even take them in now, unless I get friendly with the owner. In all countries supplies are getting harder to find, for what reason I don't know. There must be thousands of the things around, underneath mattresses, in wardrobes..."

And Paul bemoans what he sees as a lack of originality in modern guitar design. "They aren't as interesting now," he says, opening the case of a 1965 Kay Speed Demon III. "It used to all be done in-house, everyone had their own pickups, their own bridges, their own control knobs even, and their own machine heads in some cases. Everything was done to be as original as possible, whereas nowadays it's your standard Japanese, Schaller, or American hardware on most guitars — there are very few people who do it all in-house now.


"It really irks me on pickups and bridges, that's where makers could put their own designs in, but they opt for the easy way out and put on Lawrences, DiMarzios, or whatever. It's no longer a truly original guitar. I suppose the Japanese have gone back to more original thinking, but it's still mainly cosmetic: different shapes, different colours."

Paul's collection underlines the point: variety is definitely an apt description. Shapes and colours, of course, but also pickup configuration, wiring set-ups, bridge and tremolo layout, control options: they all exhibit a fascinating spread of design and manufacturing flair — even if the end result isn't quite what you'd describe as "attractive".

And so Paul could show you guitars with built-in amps and speakers (Teisco and Silvertone from 1966/67), with "an extra cutaway for improved knee balance" (Eko Super 4 of 1965), with four pickups (eg a 1965 Ibanez 3904 or a 1962 Antoria solid), with "Armadillo plastic hide covering" (1961 Klira two-pickup), or with an early aluminium neck (1963 Wadre from Italy). And there's plenty more where they came from.

"We laugh at them now," says Paul as the One Two team pick themselves up from the floor yet again. "But they weren't designed to make people smile. Even I find it hard to comprehend their thinking, that anybody seriously thought these guitars would sell. But they did sell!"

There are some as yet vague plans for a guitar museum to house the Day Oddities, allied perhaps to a studio complex and a retail outlet. Maybe a more interesting way for the guitars to get out and about a bit more would be as visual props for promo video shoots, where bad taste seems so often to be at a premium. Already local Devon group Mercedes have used Paul's Welson organ-guitar on video and TV spots, and Marco Pirroni seems keen on using the see-through Selmer combo on a video.

"I'd like to see that happening more," admits Paul. "I could see people getting into these guitars for their visual appeal rather than their playability, like ABC and the Hagstrom P46."

Paul's future plans also include a second volume of "The Burns Book" detailing additions and up-dates on the first. And he's planning a much bigger project too — working title is "All Our Yesterplays" — which will catalogue, describe and picture all the kinds of guitars he collects.

And what guitar from among this choice bunch does Paul choose to take with him on the road when backing Sean Ford? None. Astonishingly, he plays a distinctly modern pair of Arias, an RS850 and an RS600H, "by virtue of requirements rather than choice, because what I play demands high-fret accessibility and so on. I also carry around a '74 Strat and a Melody guitar, but the Arias are the mainstays. I don't particularly trust the oldies on the road, they're bound to get bashed. The Arias do the job."

So the collection is really for personal pleasure? "Yes, but also to preserve them. They all seem to be interdependent at that end of the market, they try to be as impressive as possible above their true station in life. I love multipickup jobs — you don't get any up-market four-pickup guitars. But down among my stuff four pickups is common — I'm looking for one with five or six. There must be one somewhere." 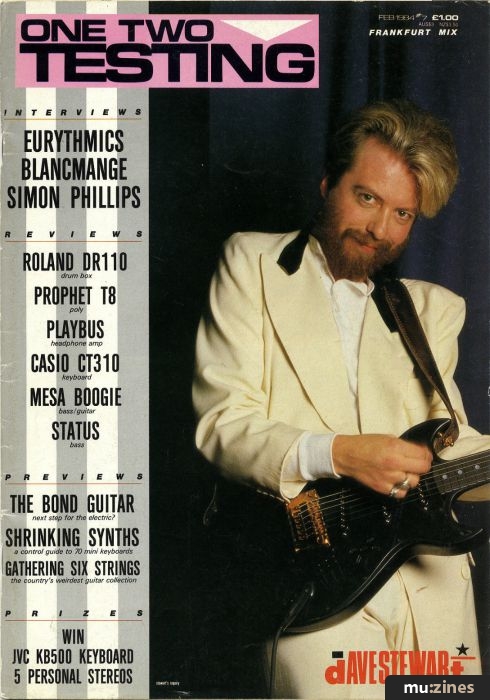