Well, not quite, but a hardware add-on for the original Powertran DDL that brings it up to scratch in the contemporary world of sound-sampling. Circuit designer Patrick Shipsey reveals all.

Well, not quite. But this mini-project does let you control the pitch of a sound frozen inside a Powertran DDL from any monosynth equipped with a trigger output, and there's a PCB available from E&MM.

Not being able to afford the sophistication of Powertran's MCS1 MIDI Controlled Sampler, I was once faced with the prospect of not being able to do very much with the sounds I could store in the memory of the same company's 'conventional' DDL. Sure, the built-in Freeze function was useful, but what fun I could have if only I could figure out a way of controlling the pitch of the frozen sound from a keyboard. Well, now I can. And if you're afflicted with the same problem and not averse to getting the soldering iron out from the cupboard under the stairs, you'll be able to as well.

Basically, the modifications I'm about to discuss make it possible for frozen sounds to track the pitch of an external instrument (probably a monosynth, though it could conceivably be something more exotic). They also include an external trigger input, which works from a zero to +5V trigger pulse, but could no doubt be converted to operate from an S-trigger. Both external trigger and oscillator can be switched in or out at any time, and with each of them out of the way, the DDL performs as usual.

The really good news is that making said modifications doesn't involve removing the Powertran's main PCB, as all wires are soldered either to PCB tracks on the top of the board or to IC legs bent out from under the protective body of their associated chip.

And there's more. The mod will work on the minimum amount of memory (4K), so it isn't even necessary to have all the memory fitted to your DDL before commencing work on this project (though this would still be an advantage). However, I'll be assuming throughout the piece that you have access to the original DDL circuit diagram - the technical description won't make a lot of sense if you haven't...

As for prototype development, I've successfully fitted the modifications to both my own DDL and that of a friend, and didn't encounter any problems in doing so. A second friend (I'm just so popular) has managed to fit the frequency-tracking part of the circuit to a Boss DE200, too. Even E&MM's Technical Editor built one, and his worked first time.

Sound quality has been nothing short of remarkable, and I've had endless fun mucking about with the usual sampling cliches like human voice 'aahs' and slapped bass sounds. And all for well under a tenner, PCB and DDL excluded.

The PCB layout shown in Figure 6 should result in something a good bit neater than my veroboard prototype will ever be, and the component overlay isn't too densely packed, so there should be no soldering problems to speak of. You're best off using IC sockets for the two CMOS chips, IC6 and IC7, and I'd also suggest inserting the components in the following order: PCB wire links, IC sockets, resistors, capacitors, and finally the two transistors. Chances are your jack sockets will be of the solder lug variety, in which case you'll have to use short wire links to mount them on the board. And make sure they're fairly sturdy, as they're all that supports the PCB once it's been fitted inside the delay unit's case.

With all the components on the PCB, the next task is to wire the whole thing into the DDL circuit. Figures 1 and 3 show boxed labels that refer to the points on the DDL circuit at which wire links should be inserted and are quite explicit in their instructions, as the inclusion of IC pin numbers will tell you. You'll also see numbers in all the boxes except the Freeze one, and these correspond to the numbered positions in Figures 5 and 7 for easy cross-referencing.


Making connections to IC legs shouldn't pose any problem, as it's simply a case of taking each IC out of its socket, bending the appropriate legs out from the body, returning the chip to the socket and soldering each bent-out leg (which is no longer connected to the circuit) to its corresponding wire. Take care not to hold your soldering iron against any leg for too long, or you'll damage the IC. There are a few connections which aren't to IC legs, wzthe link between point 1 and one end of R55; the wires for points 12 and 13, which are +5V and digital 0V connections respectively and should be soldered to the tracks on top of the PCB; the wire between point 14 and S8, which can be inserted through a board connection hole (see Figure 7) and soldered from above; and the Freeze connection, which should be made according to the instructions in Figure 8 - note that S3 and JK4 are wired according to this Figure, not as shown in the original Powertran circuit diagram. One final point is to ensure that IC legs 3, 4, 5 and 6 should be linked together as shown in Figure 7. Any 5V and 0V lines you might need can be picked up from some convenient point on the main PCB.

The last job is to mount the PCB and the two switches inside the DDL case. The thing to do is mount the PCB on its two jack sockets towards the rear of the case, above the power supply board. In fact, Figure 9 should give you all the PCB mounting details you'll need.


Before you set out, bear in mind you'll have to remove both front and back panels in order to drill holes in them, not only because it makes life a hell of a lot easier, but also to avoid leaving any metal chips inside the case - they could short out tracks on the PCB. I've indicated that the switches should go on the front panel (it seems the most logical place for them to be), but you are of course at liberty to mount them wherever you wish. One disadvantage of putting them on the front panel is that they'll need fairly lengthy connecting wires to link them to the PCB, and you'll probably have to twist these together for neatness' sake.

If you want to use your modified DDL in 'Emulator' mode, you need two things: an external signal with a frequency between 190Hz and 1.5kHz and, ideally, a trigger signal as well. Assuming you're using a synthesiser of some description, set it up with just the one oscillator on and producing a sine or triangle waveform. If you have to use another waveshape, filter it so that it contains little more than a fundamental frequency component. Filter sweep should be set to zero, as should any VCO frequency modulation, at least when you're actually in the process of sampling a sound.

If no trigger or gate out facility is available on your particular synth, you'll have to use the VCA to effectively gate the clock signal on and off by setting its envelope to an on-or-off configuration.

However, be warned that without any form of trigger signal, the DDL won't return to the start of a sample each time a new key is pressed. Thus a trigger really is a necessity, especially if you're going to be using samples with a decaying amplitude envelope, like percussion sounds, for instance.

If you do have a trigger at your disposal, you can set the signal output from the synth to be permanently on, using an infinite sustain or hold facility if the synth permits. What makes this possible is the fact that the DDL stops as soon as it's been clocked to the end of its memory, which means that it'll automatically play the whole of the sample and then stop (rather than continuously looping as it would ordinarily do in Freeze mode), awaiting a trigger signal to tell it to start all over again.

As for sampling, there are a couple of possible approaches you can use depending on how many free hands you have, though in either case, you'll find a footswitch for the Freeze function is a real boon.

The first option is to set the trigger repeating regularly, using either a drum machine or a synthesiser's envelope repeat as the trigger source; the former's audibility makes it preferable. Don't set the trigger to occur too frequently, as this'll limit the amount of DDL memory you can use for the sample itself.

The sampling rate is set by the key you hold down on the synth. Try using a rate related to the keys in the second octave above Middle C (ie. 512-1024Hz), as this will keep aliasing down to a minimum. If you need a longer sampling time, you can use keys in a lower octave, but you'll have to switch the Powertran over to 4kHz bandwidth, again to minimise aliasing.

Make the sound you wish to sample just after the trigger beat occurs, hit the Freeze button, and your sample should then be held in memory awaiting playback...

The second option - the one that's dependent on your having a free hand - is to trigger the DDL manually by striking the appropriate synthesiser key just prior to making the sound to be sampled, and then hitting Freeze as before. You can of course sample sounds with the external oscillator switched out, something that would be particularly desirable if you only wanted percussive sounds triggered by a drum machine, say.

And the applications of the circuit aren't limited to sampling, either. For example, applying a drum machine to the external trigger input on its own can give you repeat echoes that are exactly in time with the beat - no more awkward fiddling with the Delay Time control! Come to think of it, varying the number of trigger pulses per measure as you go will give you effects changes (from long echoes to reverb, say) within the one pattern, without having to lay a finger on the DDL.

Alternatively, using the external oscillator on its own will free you from the single triangle wave option on the Powertran's own LFO. Is there no end to this?

As mentioned above, a PCB for the above circuit complying to the layout illustrated is available direct from E&MM at £3.95 including VAT, postage and packing. Please make cheques/POs payable to Music Maker Publications, and allow 28 days for delivery. 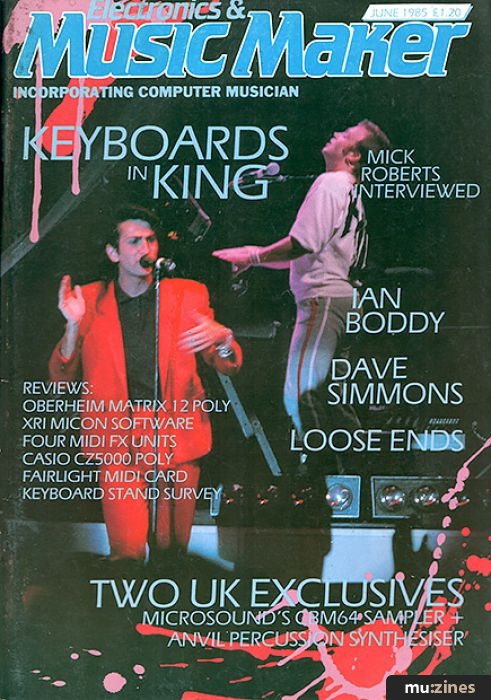