If you're a computer manufacturer and you've got excess stocks to sell, you switch the emphasis to music. That's what Commodore have done, as Chris Jenkins reports.

In an effort to shift stocks of C64 computers, Commodore have announced a revitalised range of music software that includes a decent sampler and an FM synth voice module. The whole package looks conspicuously good value. 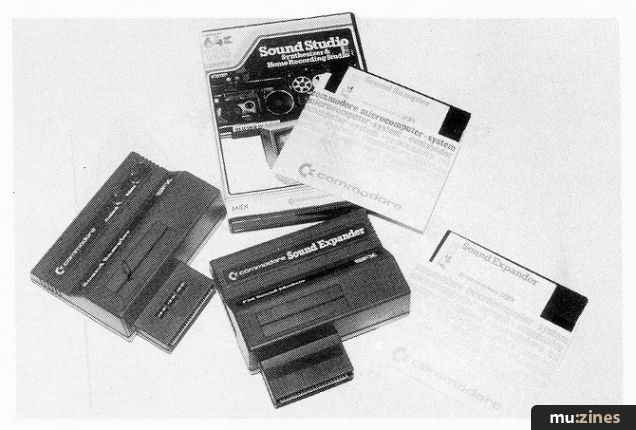 What would you do if you had thousands of ageing home computers to sell, and the market seemed practically saturated? If you were Commodore and you had to shift stocks of the popular 64 micro, you'd decide to go full tilt for the music market.

Because the 64's primitive BASIC makes it next to impossible to write good music programs for without delving into machine code, lots of musicians and computer hobbyists fail to realise that the micro's SID (Sound Interface Device) chip is a miniature synthesiser in itself, complete with three voices, selectable waveforms, filter, ADSR and modulation. But to make it easier to get the best out of SID, you need commercial software - or you can bypass SID altogether, and use external sound sources under the computer's control. Fired by the enthusiasm of Commodore's new marketing director Chriss Kaday - himself a former musician - the company have produced, in conjunction with Music Sales, a range of hardware and software packages which should appeal to all C64 (or 128) owners, not to mention a few people who hadn't previously considered owning a computer at all.

The range includes SID chip compositional software, a sampler, an FM voice module, a full-spec keyboard and clip-on overlay, and a MIDI interface. Yes, Commodore are aware that no computer is an island, and have built MIDI communication facilities into all the Music Sales packages - though the appropriate interface isn't available just yet.

Perhaps the best of these packages is the Sound Expander. Built into a cartridge of the type used for the Magic Voice speech synth, the Expander is an eight-note polyphonic FM music synthesiser. Since FM of this kind is the exclusive preserve of Yamaha, it's easy to work out where Commodore bought the chips, though you won't find any mention of Yamaha in the literature.

The Expander plugs into the cartridge port of the C64 (or 128), and has three connectors. The first is a phono out for connection to amplifiers (though you can listen to the signal through your TV or monitor), the second a cartridge port which will accept the forthcoming MIDI interface, and the third an edge connector for the keyboard.

Once you've loaded the software, you can play the Expander in three ways: using the QWERTY keyboard (impossible), using a clip-on Music Maker keyboard overlay (difficult), or by connecting up the forthcoming Music Sales mechanical keyboard. This luxurious Italian item is a full-size, five-octave device with good feel and fine finish - enough, in fact, to make you think you're playing a real musical instrument.

So, as soon as you've chosen your method of play and arranged amplification, you load the software from disk and play away. The main screen display shows a music stave, on which any notes you play are shown instantly. Above this is the option menu.

The first option is Setup, which allows you to select the keyboard control modes: normal, single finger chord, fingered chord, keyboard split, split point, and transposition. If this selection gives you the idea that the Sound Expander software is meant to emulate a Casio keyboard, you'd be right; the emphasis is very much on quick and easy playing.

The second menu allows you to select the synth voices, of which there are 30 on the first disk, all of them slightly modifiable by changing their algorithm. Similar in character to a DX9's presets, the Expander voices include piano, vibes, chimes, strings, clavinet, synths, and some engaging novelties such as a swooshing Alien. All the voices have the clarity and brilliance synth players have come to associate with FM sounds, though bear in mind you'll need decent amplification to appreciate them. The ensemble option gives even better sound with four-note polyphony.

The next option is Rhythm. As a bonus, the Sound Expander has percussion voices built in, though these are little better than the drum sounds of a midrange portable keyboard. The pre-programmed rhythms include Pop, Rock 'n' Roll, Reggae, Disco, Country and so on; fortunately, not too many of the common Bossanova/Cha-Cha/Beguine type.

The fourth option is the unusual Riff Machine. This consists of a series of preprogrammed bass, rhythm, chord and lead sequences, which can be combined into tunes up to 256 bars long simply by loading them from disk, and then pressing the appropriate keys. Unfortunately, you can't play along with these computer-controlled masterpieces, so this isn't exactly the most useful feature on the Expander.

The last option is the disk menu, which allows you to load new voices, riffs, and demos.

The Sound Expander costs £99. For your money, you get the benefit of FM sounds, but you do need either the forthcoming keyboard or MIDI sequencing software to get the best from them. 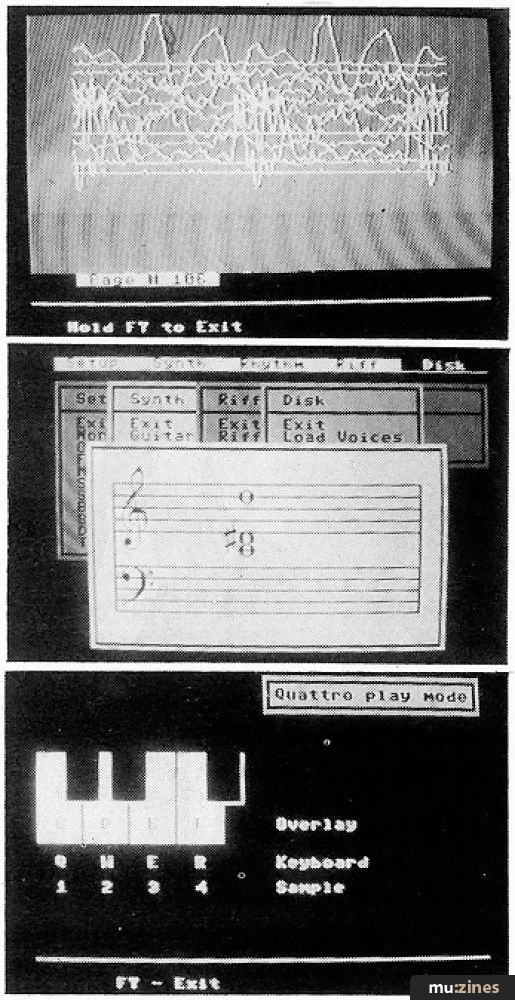 Second device in the Music Sales series is Sound Sampler, and a surprisingly good one at that. Given a selling price of just under £70, you might be forgiven for thinking this plug-in module is an expensive toy, but not a bit of it; it's a usable musical instrument that offers decent-quality monophonic sampling and a range of digital delay effects.

Like the Sound Expander, the Sampler plugs into the cartridge port of your 64 or 128. It comes complete with a plug-in microphone, but if you're going to be fair to the unit, you're better off using a more sophisticated mic. There are controls for input volume and feedback on top of the module, and a phono output. Again, there's a cartridge port for the forthcoming MIDI interface, though no direct keyboard connector.

To say that the sampler software is easy to use would be something of an understatement. On the left-hand side of the main display is a bar chart showing the input level and trigger threshold, which you adjust using the Commodore's function keys.

Select Sample, bark into the microphone, and you can play your funny noises back immediately via the QWERTY keyboard or Music Maker overlay. Sampling quality is reasonable - though no figures are given - and sampling length is about one-and-a-half seconds.

Having made your sample, you can call on a number of menu options with which to modify it. You can display a Fairlight-type mountain plot (which is pretty to look at but doesn't offer the opportunity to perform waveform editing), set a repeat on the sample, reverse it, or alter the start and end points. Not unexpectedly, these options allow you to tidy up your sample, and make it a good bit more 'playable'.

Now we come on to 'Quattro sampling', which is not a soft-drinks testing routine, but a multisample option for short percussive sounds. You can make as many as four samples, and play them back either using the keys Q, W, E and R, or using the Quattro Sequencer. This is hardly a 'professional' feature: the sequencer allows you to arrange your four samples in patterns of 16 beats only, with pauses if you wish, and play the pattern at a range of tempi from 1 to 28. If you want different time signatures, pattern variations or pitch changes - forget it. There are two demo files of percussion samples on the disk, though ironically (and rather irritatingly) these are themselves taken from digital drum machines.

The Sampler's last feature is the Effects page. Here you can select one of eight real-time harmonising effects, which can make you sound like Donald Duck or the man in the Denim adverts, depending on which treatment you select. Actually, the Feedback control offers some mildly fascinating effects, and there's also an Echo option, which provides delays of between 20 milliseconds and 2 seconds, and a repeat function adjusted by the Feedback control. Quality is fair, but control limited.

Overall, the Sampler is an excellent and inexpensive introduction to the technique, with the software's all-too-obvious failings being, I suspect, insurmountable given the limited amount of memory space in the C64.

Third of the newly-packaged add-ons is a piece of software called Sound Studio software, which uses the by now familiar menu and window routines to provide sound synthesis and sequencing on the SID chip. At under £15, the Sound Studio takes over many of the synthesis capabilities of the now updated Music Maker software, and allows you to enter up to six monophonic lines of music in step time or real time. These can then be edited on a step-by-step display, and played by three voices of the SID chip and three voices of a MIDI instrument, with the help of a suitable interface.

Along with the existing Music Maker software packages, clip-on keyboards and playalong albums of pre-recorded popular tunes, the Sound Expander, Sound Sampler and Sound Studio show just how much can be done with what is only a rudimentary home micro, with no more than a modicum of computing power and comparatively little in the way of memory. None of the Commodore packages is usable in a strictly professional environment like a recording studio, but there's no reason why their capabilities can't be used for their novelty value. And in any case, the real value of this range is that it encourages existing computer owners to do more with their machines than just play games. After all, today's Space Invaders player is tomorrow's FM programmer (it says here).

And there are more music add-ons in the pipeline. Like sound library disks for the Expander and Sampler, FM voice editing software, a music composing program similar to that of Yamaha's CX5, the MIDI interface, the full-size keyboard, and so on. Keep an eye out for them, and look out, also for bargain packages comprising a 64, cassette deck, Sound Expander and keyboard, and selling at a ludicrously low £199. First batches should be in the shops by the time you read this. In addition, there'll soon be a complete system available at under £330, and an expansion system for under £150.

Eventually, Music Sales intend to produce a single unit that'll include four-voice polyphonic sampling and editing, mixable and fully programmable FM sounds, a sequencer and a comprehensive set of MIDI functions. Unfortunately, the humble 64 and 128 won't be able to take the strain - the machine this awesome package is intended for is the Commodore Amiga. 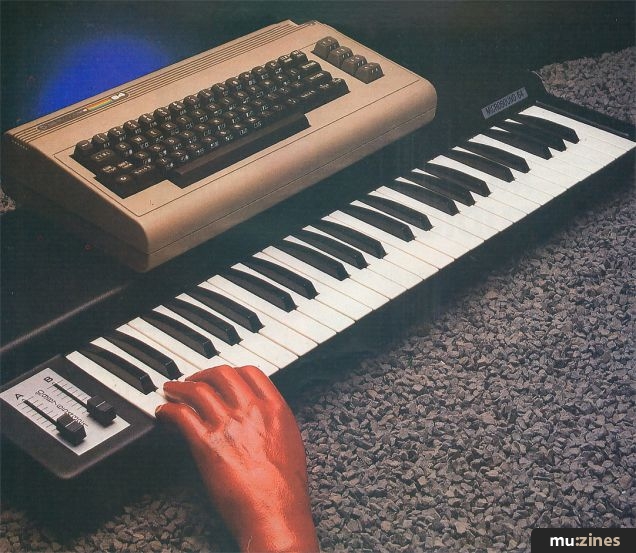 The Sound of the Voice

> The Sound of the Voice